Gardening in France: Step back in time for some ‘dinosaur’ planting 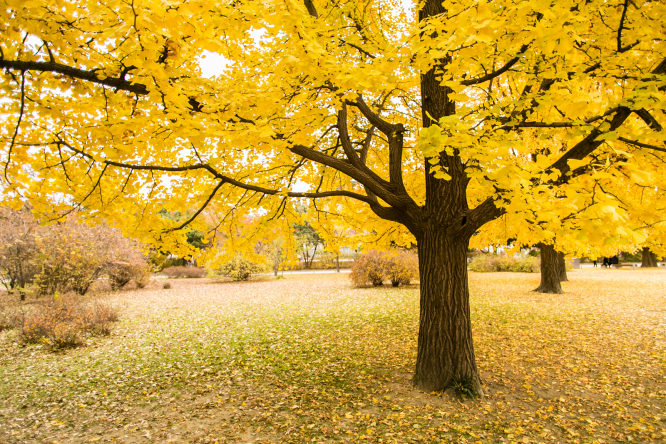 Now is the time, while the soil is still warm, rich and moist, to get planting in your French garden Pic: atk work / Shutterstock

Bonne fête to all other Catherines out there! I hope all the ‘Catherinettes’ (as unmarried Catherines are called in France on their Saint’s Day, 25th November) are wearing their silly hats, as per tradition. But forget praying for a man in your life (also tradition) – get out there on 25th November to use all that lovely black stuff you have accumulated in your compost bins.

'Get planting – it’s time, while the soil is still warm, rich and moist, perfect for encouraging new root growth'

This year, on St Catherine’s day, I am hoping to plant a couple of dinosaurs in the garden. The first is a Gingko biloba that’s been sitting in a pot on the terrace for about five years. It has put on quite a lot of growth and I have been enjoying the beautiful bilobed, fan-shaped leaves – unique among seed plants – with the delicate veining that spreads out from the apex of the leaf stalk.

Perhaps you have noticed that there are many jewellers these days using the Gingko leaf as a pattern for drop earrings? Hardly surprising, given the delicate beauty of the originals. But, even better than the green summer foliage, is the warm butter yellow the leaves assume just before they drop. I am going to miss the joy of the fallen foliage on the terrace – they lie there, unblemished, for so long. But this is a huge, columnar tree (to a maximum of 35m) and very long-lived. Mine now deserves a place in the garden.

Why is it a dinosaur?

It’s believed that the order Ginkgoales was widespread on the planet over 200 million years ago during the Triassic and Jurassic periods of the Mesozoic age, when over 16 genera probably flourished. Now, we have this one sole survivor. The Chinese have guarded it for centuries in its homeland, appreciating the plant’s medicinal benefits, which are increasingly advocated by herbalists in the West.

Gingko biloba is called the ‘maidenhair tree’, because the leaves resemble the leaflets (pinnae) of the maidenhair fern. It is worth noting that the tree is dioecious – meaning it carries the male and female reproductive organs on different plants.

Avoid the female form at all costs because the ripe fruits will quite simply stink your garden out and put you off your tea or apéro. Gingkos prefer sun and moist, but well-drained soil. In more confined spaces, you could try the variety ‘Fastigiata’, which is less spreading.

And my second dinosaur?

Magnolia grandiflora is a member of one of the oldest flowering plant families on the planet – it is believed that only the conifers date earlier in Earth’s history and the primitive shapes of flowers very like our modern magnolia have been found as fossilised remains. The family was named for Pierre Magnol, a seventeenth century botanist who was born in Montpellier and later became director of the oldest botanic garden in France, the Jardin des Plantes at Montpellier, established by Henri IV in 1593.

It took Paris 40 years to copy the model and create its own, now more famous, botanic garden! The first magnolia species known to Europe was discovered by botanist Charles Plumier in 1703 in Martinique and he promptly named it after Pierre Magnol, in celebration of the fact that Magnol was the first to invent and publish the concept of plant families based on their morphology. Some have even argued that Magnol’s system is superior to the sorting of plant families according to their sexual organs that Linnaeus published 50 years later.

So I am keen to plant Magnolia grandiflora, one of the evergreen members of the family. The species originates in the southern United States where it has become somewhat symbolic of the old Confederate states. Because Magnolia grandiflora likes heat so much, it is perfect for many southern and western areas of France and should do well on south- or west-facing walls in more northerly regions. Just don’t forget to give it plenty of water for the first few years.

The huge shiny leaves are remarkable for a soft yellow-brown ‘indumentum’, or coating of downy hairs, found on the underside of the blade in many cultivars – but, oh, it’s the flowers that count. Huge, creamy-white and highly citrus- scented, the largest flowers of the species occur in the dinner- plate sized blooms of ‘Exmouth’.

However, I’m thinking of planting ‘Galissonière’, which grows up to a manageable 10m and is a pleasant rounded shape, thus very popular in municipal plantings in Europe. It was named for the Marquis de La Galissonière, governor of New France in Canada, who introduced it to his homeland in the 1740s.

If I wanted to plant a smaller version, with the same deliciously scented flowers, I’d go for ‘Little Gem’, which never grows more than about 4m and can even be accommodated in a pot on the terrace. Or I could go for ‘Kay Parris’, larger at 8m maximum.

The decision has yet to be made. But, whatever my choice, I will hopefully be able to recreate a happy memory of being welcomed to my guest room for the night by a thoughtful host who had placed a wide, shallow bowl of floating, deliciously scented Magnolia grandiflora flowers on my dressing room table.