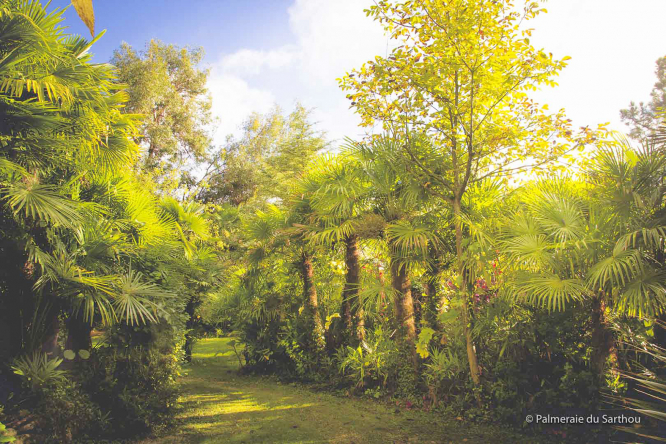 There are fewer gardens to visit in November, but one which is well worth a visit and is open all November is the Palmeraie du Sarthou, close to Bétous in the Gers.

The first palms were planted in 1980 when a local couple, Marie-Christine and Daniel Fort bought a house with a garden. Daniel Fort was a trained horticulturist and he loved the palms he saw growing in the grand houses in Gascony.

He could not afford to buy a mature tree and so he collected seeds and through trial and error soon had a collection of young palms, which began to reseed themselves. He continued his day job, but at the same time introduced new plants and developed a nursery with exotic plants he sold to professional gardeners. All was either grown from seed, or from very small plants.

Then in 2000 the couple decided to open to the public. In 2006 they were awarded the Jardin Remarquable label. They are both retired now but continue to run the garden themselves with no outside help. A mammoth task, but one they approach with great energy and enthusiasm and a love for the plants they nurture. 2.5 hectares is devoted to the exotic garden and there is a further six hectares where you can walk and discover local fauna and flora.

“When visitors arrive, they tell us that they immediately have the impression that they are in a completely new world,” says Marie-Christine Fort, “because you go directly into the palm garden. They say they feel as if they are in Asia or somewhere else far away.”

You walk through avenues of palm, bamboo, banana plants and lakes with lotus flowers and as the planting is dense you feel you are in a small, tropical forest. The remarkable feature is that the Gers climate is harsh with temperatures that can go down to -20 in winter and snow:

“People don’t realise that many palms come from cold parts of the world, and though they are exotic, they are not all tropical,” says Mrs Fort. “We don’t have to protect our plants in winter because we have chosen varieties which resist the cold. Our main palm is the Trachycarpus fortunei or Chinese Windmill Palm, which comes from the foothills of the Himalayas and it prefers the cold to the heat. Our visitors are very surprised when I show them photos of the palms in the snow.

“Other palms come from Mexico, Morocco and Central America. We have around five varieties which can survive temperatures of between -15 and -20 degrees. We have two varieties of banana tree which die back in the cold, but survive because the roots do not freeze.

“Most bamboo survive the cold and we even have varieties which can survive -30. Isn’t it good news that you can have an exotic garden even in the cold?”

She says that the garden often looks at its best in the winter: “The winter light with a light frost in the morning and a hint of mist is often more romantic than in summer and the clarity in the autumn and spring is also magnificent.”

But there is a shadow hanging over palm trees in southern Europe as they, like box are threatened with imported pests. There are two which destroy palms; one is the  Paysandisia archon  (Palm moth) from South America and the second is the red palm weevil from Asia (see Beetle Mania).

Mrs Fort says that so far they have not been infested but the disease is present in the south of France: “I think we have not been touched because all our plants have been cultivated here and we have never bought palm trees from outside. It is a terrible thing and I urge people to be very careful when they are tempted to buy cheap trees which have come from Italy or Spain, as they may already be infected.”

The couple sell young plants and seeds to visitors from their small nursery. It used to be bigger when they sold to specialist nurseries, but she says they can no longer compete with big chain store prices. However, she says planting from seed is an option:

“I would say it is not difficult. It is just like planting any other seed, though you must not forget it. Palms make good friends, but only if you nurture them. It takes between 14 and 15 years for a Trachycarpus fortunei palm to reach maturity and start producing its own seeds and it will then be between 2 and 2.5m high.

“When schools come I show the pupils how to plant a seed. I find that the children have lost the notion of nature even those who have lived in the countryside and many have never put their hands in the soil. I also teach them how to see and listen to nature. It is difficult at first because they are used to being surrounded by noise but I am very proud when there is silence and the children are listening to the birds. We are very proud when these children come back with their parents to show them where they have been.”

After the visit to the exotic garden which includes tropical plants growing in greenhouses you can then walk amongst the local vegetation in a six hectare area, including their orchard and a mosaic of 135 Lagerstroemia they planted three years ago in whites, purples and pinks.

Mrs Fort says they have not used chemicals in the area for forty years and the results are positive: “In that time a number of indigenous plants have come back, including a wide variety of orchids, poppies and hyacinths and animals such as salamanders and newts. It means that in forty years nature can clean itself up and that is wonderful.”

Mrs Fort says they have several British visitors and often she does a guided visit in English, with, she says a strong Gascony accent and she appreciates help from anyone in the group who speaks good French: “I love to do this and we often have tea at the end and all is done with plenty of laughter and conviviality, so do not hesitate to get in touch.”