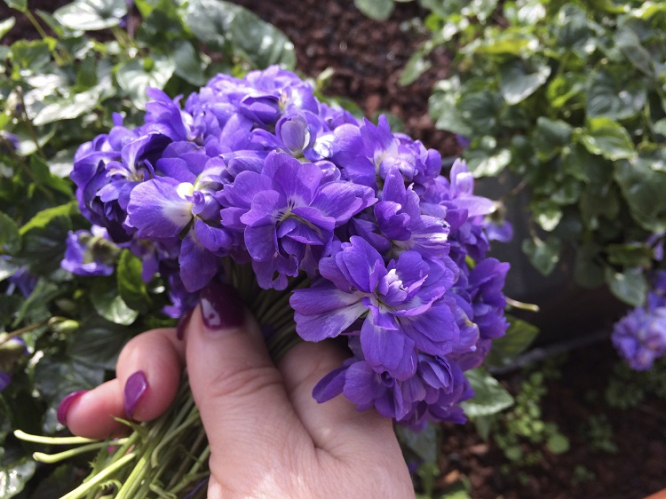 February is the month of the violet in France with festivals in the two regions which are centres for this winter flower. Tourrettes-sur-Loup in the Alpes-Maritimes is the only place where the violet is the sole or main crop. Their Fête des Violettes is on February 27-28. Toulouse has long been called la capitale de la violette and has its festival on February 7-8.

When the winter fields are bare what more attractive crop could there be than the violet which flowers from October to March at Tourrettes-sur-Loup in the Alpes-Maritimes? It has been cultivated there since the 1880s and at its peak there were 40 growers. In the last 15 years that number has decreased rapidly and now there are only three producers but the scent of the flowers is still in the air when you visit the village in winter and visitors flock to the annual festival and to a museum dedicated to the plant.

The variety that is grown is called the Victoria and has a particularly strong scent. Originally it was grown to make into bouquets and there was a special skill in assembling the flowers.

“I remember helping my parents pick the violets when I was a very young girl,” says Patricia Tiezzi, who now shares her knowledge of this crop with visitors to the Bastide aux Violettes museum. “I loved helping them. Making a bouquet needs a great deal of dexterity and each one has 25 flowers and 10 leaves and will keep for about eight days.

“In the past a skilled bouquetière could gather the flowers together at a rate of 70 to 80 an hour and then she handed it on to someone else who would add the leaves at a rate of 120 an hour. Now bunches of violets are less fashionable, though they are still popular for Valentine’s Day as the flowers are the symbol of love, faith, humility and purity.”

The decline in the flower market has meant fewer growers and now the violet is mainly used in confectionary and perfume.

Florence Coche started picking them when she was two years old on her parents’ farm. To keep the family business going, she started making crystallised flowers and now picks just the flower heads more often than the whole stem. She says you have to be gentle: “You have to pick them as carefully as possible so they keep their shape and it’s the same when you pour them into the sugar – you must make sure they don’t stick together.”

Nearly all the work is done by hand. Increasingly the plants are grown in hanging tubes in poly-tunnels in which they flower better and are less susceptible to disease and require very little chemical treatment. Ladybirds are used to protect against aphids.

The flowers are picked throughout the winter. The most prolific period is at the end of February and beginning of March when the most flower heads are gathered – there are 7,600 flowers to the kilo. In the summer it is the leaves which are harvested and they are sent to nearby Grasse for the perfume industry. They are cut once in May and once at the end of July.

Both leaves and flowers can be used in the perfume industry and they give different qualities. The perfume given by the leaves is described as very strong, with a scent close to spinach or cucumber, while the flower perfume is much sweeter and floral.  The leaves from Tourrettes-sur-Loup are transformed into what is known as concrete in the perfume industry. It is a semi-solid mass obtained from the fresh plant which is then used as an element in different perfumes. 40% of the income from violets in the area comes from the leaves for perfume and 60% from the flowers used in confectionary and a few in bouquets.

In Toulouse, it is the Parma variety of violet which is cultivated and the Toulouse violet became famous from the middle of the 19th century. It was very fashionable and sold as bouquets in France but was also exported to England, Germany, Russia and Morocco.

Some 600 families made their living in winter from the violet and more than 600,000 bunches were sent throughout Europe every year. In Toulouse it is said that every day a train with three to six coaches full of purple bouquets left for Paris.

The Parma violet has more petals than the simple five-petal Victoria variety. It is more difficult to cultivate, and disease and a very severe frost in the winter of 1956 virtually wiped out the plant. It is hard to reproduce because it is a sterile variety and does not produce seeds. In 1984, the Midi-Pyrénées regional council decided to research new ways of making the plant stronger and a more resistant variety with a registered trade name Violette de Toulouse was created.

There are now just two producers left in the area. One of them is Hélène Vié, who has made it her mission to keep the Toulouse violet alive.

“For a long time now it has been seen as old-fashioned and I want to give it a new start,” she says. “I have created La Maison de la Violette on a boat on the Canal du Midi and I love to invite people on to it to tell them the traditions about this flower as well as show them how you can enjoy living with the simple things of nature.

“More and more people are interested in a return to nature and I think the violet will become fashionable again. I don’t think people want to buy bouquets though so I am developing violets in pots. It is wonderful because it is a winter flower and if you have it on your balcony you get a wonderful aroma as you pass by.”

Mrs Vié is undaunted by the fact that there are so few growers left: “As a child I grew up with the smell of the perfume from my grandmother and great grandmother and I loved the vibrant colour. I am passionate about passing on my knowledge to the next generation. I have two daughters and they will take on the business from me.”