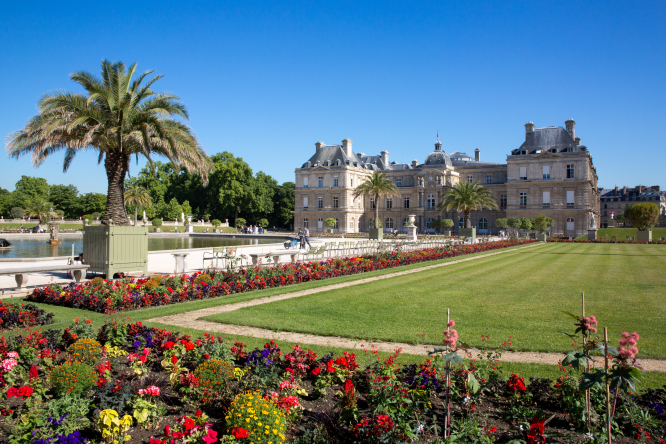 Le Jardin du Luxembourg, in the centre of Paris on the border between Saint-Germain-des-Près and the Latin Quarter, is worth visiting not only as a green park to stroll through to escape the noise of the city, but also as a garden with many horticultural treasures.

It also has a rich history which reflects the story of Paris, and it is at the heart of French culture, favoured by many of its most illustrious writers and philosophers such as Baudelaire, Victor Hugo, Verlaine, Balzac, Jean-Paul Sartre and Simone de Beauvoir and painted by the greats such as Rousseau and Van Gogh.

Benoît Priel, technical director of the gardens, says they are recognised as the most beautiful gardens in Paris: “They are very varied with parts which are in the classic French style and areas planted à l’anglaise. There are important collections including  a greenhouse with tropical orchids, an orchard with 600 varieties of apples and pears, 3,000 trees, flower gardens, 35,000 shrubs, beehives and a horticultural college where the public can sign up to free courses given by the garden staff.”

The gardens have not always been open to the public as they were first designed for royalty by Marie de’ Médici, who became Queen of France when she married Henri IV. She wanted to escape the Louvre after the assassination of her husband and bought the Hôtel de François de Luxembourg which gave its name to the gardens. She gradually bought more and more land to create a garden to remind her of the Boboli Gardens in Florence. It was what we would now call in the French classic style which was influenced by Italy, with geometrical designs, alleys and box hedges. As fashions changed parts were later designed in the less formal English style.

For a short while after the Revolution, the palace was a prison and the garden was no longer looked after. The palace was then turned into a legislative building and it has been the seat of the French Senate since 1879. The gardens which are  therefore owned and run by the Senate were from then on opened to the public.

In the 19th century they were drastically reduced in size when Haussmann redesigned Paris. He put a road through part of it despite five petitions.

During the Siege of Paris in 1870 and 1871 the palace became a hospital for wounded soldiers and the gardens an ambulance park.

Later, between 1940 and 1944, when the Germans took over the palace, they built defence posts and parked their vehicles in the garden. Just before the Liberation of Paris, French tanks rolled in and took back the palace.

The gardens and their horticultural collections are looked after by a team of 30 gardeners and the greenhouses have always enjoyed a worldwide reputation. One, the Serres de Paris, has a collection of 8,000 orchids, 4,000 tropical plants and an annual production of around 3,000 pots of flowers to decorate receptions in the Senate. In 1872, seeds from the tropical collection were used to re-introduce the papyrus in Egypt.

The Orchid collection is one of the oldest in European and was begun in 1838. There are 1,300 different species, and the most important part of the collection are the Paphiopedilums or Venus Slippers from South East Asia.

In the Serres de Longpont 120,000 plants are grown every year to be planted out in the gardens. The greenhouses are only open to the public once a year on the European Heritage weekend.

There is also an Orangerie which, in winter shelters 200 palm trees, pomegranate trees, oleanders and citrus trees, some of which are more than 200 years old.

There are 50 flowerbeds which are planted out three times a year; spring, summer and autumn so that there is colour from March to November. In spring there are primula, pansies, tulips and hyacinths which are planted in November to avoid empty beds during the winter. There is some spring planting, including poppies which would otherwise be eaten by the pigeons over the winter.

There is a great deal of forward planning for the summer planting as the gardeners try never to repeat the same composition twice. They use around twenty different species to ensure a range of colours and continuous flowers over a five month period.

Geraniums are often used as a base with petunias, ageratum, dahlias and sage.  More unusual plants give variety, for example the castor oil plant, cardoon and pennisetum. Compositions are tested out first in smaller, more discrete beds.

Many of the 3,000 trees in the garden are more than 100 years old and some are no longer healthy. The orchard was originally part of a Chartreuse monastery which used to be to the south of the palace. In 1650 one of the monks who had originally been a gardener, developped a vast collection of fruit trees, which in 1712 produced more than 14,000 trees which were distributed throughout Europe. After the Revolution the monastery was closed but the collection was saved and planted in the Jardin du Luxembourg, and ever since the gardeners have given free courses in the art of growing and caring for fruit trees. All the trees are labelled and those with the logo of a monk are those that were cultivated by the Chartreuse monks.

We tend to think of urban beehives as a new concept but the first beekeeping school set up by the Central Society of Apiculture was in Le Jardin du Luxembourg in 1856. It could house twenty bee colonies and displayed examples of different types of hive and beekeeping equipment. The original hives were destroyed when Haussmann reduced the size of the garden, but a new one was established in 1872 which was then entirely rebuilt in 1991.

You can play chess, tennis, basketball and pétanque, enjoy a pony ride, sail model boats on the lake, go to a concert or an exhibition and there is also a traditional roundabout and a puppet theatre.

There are guided visits to the gardens on Wednesday mornings from April to October.

Open every day and times vary with the seasons. For full details see www.senat.fr/visite/jardin/index.html