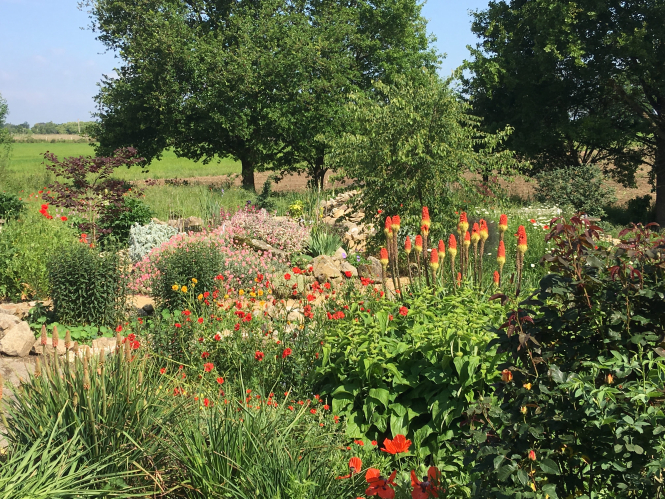 Angela Rowland’s garden, in the Mayenne, is the only one to visit for Open Gardens in September
By Jane Hanks

Angela Rowlands has single- handedly created her 1.5 acre Mayenne (Pays de la Loire) garden from what was largely a wilderness four years ago.

She says there was a sort of garden – a field with some trees on the boundary and two large areas of weeds and nettles – when she moved in, plus a large agricultural hangar.

Now there are several different areas of interest. There is a large herbaceous border in place of what was a field, the rest now being mostly lawn with specimen trees.

There is a gravel garden, with poppies and salvias.

She has another area devoted to dry loving plants which is in the shape of a star.

The area which was once green with nettles is now themed red and yellow with a blue streak down the middle.

In the top garden there are masses of roses. She has a stumpery, where ferns grow in tree stumps, though she says it is small “and not nearly as big as the Prince of Wales’ stumpery at Highgrove!”

There are two ponds, which she had dug out by the men who came to put in her septic tank, and which she is in the process of connecting by a stream. She also has a small fruit garden and vegetable patch.

She has arranged to have the metal cladding removed from the agricultural building and is growing various climbers to surround the barn.

She says she did not plan much in advance, but as she went along and to suit the plants she bought, rather than buying plants to put into a pre-thought out design.

It was a titanic task, especially as the land was particularly rocky and she moved about two tonnes of rock in total.

A neighbour did come and help her move the biggest ones, and she has made a stone circle out of them, plus two large rockeries, but, even so: “Every time I put in a plant, I had to take out three or four boulders measuring about 50cm by 30cm.”

She says the soil “isn’t bad”, much of it is sandy, but there are also clay areas. Due to it being formerly farmland, it is quite fertile.

However, it has been a labour of love: “I worked as a doctor before I retired in October 2016 and moved around the UK a great deal and though I always had a garden I couldn’t devote enough time to it to be able to open it as part of the National Gardens Scheme. I had always wanted to do this. Now, instead, I have been able to sign up for Open Gardens in France.”

She says she has bought many of her plants in England: “I go to the Malvern Autumn show, where they sell off the unsold plants on the last day at 4 o’clock and I take my people carrier and fill it up. I bought a young eucalyptus tree for a pound, and now it is 20 feet tall.”

She also took plants from her Herefordshire home: “I brought my raspberries with me, though they do not do as well here. They have been better this year, because there has been more rain.”

Rain, though, is one element, she has had to get used to doing mostly without: “Where I live is particularly dry and we seem to be in a microclimate that misses all the big storms that are announced for the area. That is why I have concentrated on dry-loving plants in many areas of the garden. In the summer I will spend three hours watering on some evenings. I do this every few days because it is better to give plants a thorough soaking rather than a daily sprinkling which will make them turn up their roots to find the water, and result in weaker specimens.

“My hydrangeas in particular do not like dry conditions. I use water from my well in which I have installed a pump, and a series of hosepipes all over the garden.”

It is a great deal of work for one person: “It has rather taken over my life, and in the future I think I will have to put in plants which are more self-sufficient. It requires more time now it is full of plants, than when I was creating it. I have learnt a great deal, and look things up all the time.

“In gardening, one year will never be the same as the one before. This year, I have noticed there have been more insects than usual, particularly lily beetles and budworms which destroy the rosebuds. To tackle them, I made up my own concoction with a mixture of oil, water, vinegar and bicarbonate of soda. It seemed to work.

“Weeds were a problem this year, with a warm February and lots of rain later on. I had to go to the UK for two weeks, and when I came back the weeds were taller than the raspberry canes!

In September, there should be lots of dahlias in flower, as well as a collection of Michaelmas daisies in white, pink and different shades of blue, sunflowers and other plants which are flowering for a second time.”

Angela Rowland’s garden is the only one to visit for Open Gardens in September. She says this is a great shame as it is a pleasure to show visitors around: “I think people are afraid that they need a perfect garden with no weeds. But in fact what visitors are interested in is getting ideas for their own garden and finding out how people have tackled similar problems to them and to talk plants.”