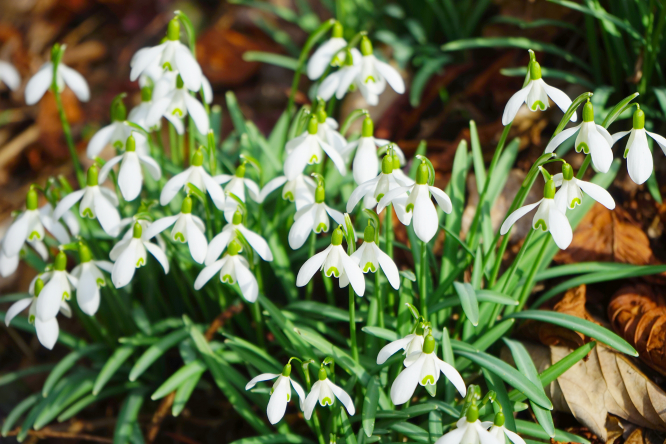 During the winter months, in February, there will be one garden which will be open for the Jardins Ouverts/Open Gardens scheme with a magnificent display of snowdrops. It will be open by appointment to make sure it can be visited when weather conditions are good.

Open Gardens encourages garden owners of all nationalities to open up their gardens, big and small to the public, to raise funds for charity. The scheme started in 2013 when four British gardeners in the Creuse decided to open their gardens to see if they could raise money for charity, and the idea quickly caught on. There are now 150 gardens in 28 departments and in 2017 the association was able to give donations of €23,500, shared between 11 charities.

Sheila Cole lives in La Poste, Arnac la Poste, Haute-Vienne and she is a keen Galanthophile, or snowdrop enthusiast. Snowdrops were named Galanthus during the 18th century and the name comes from the Greek, meaning milk flower.

She has 150 varieties and there are some in flower from October to April. She says her collection is quite small by Galanthophile standards: “150 is really quite modest. I know someone else in France who has 400 varieties. I fell in love with snowdrops 12 years ago. I was given an October flowering variety in a pot and I really liked it but it seemed strange at first to have this winter flower among the dahlias. Then I went to an Open Garden in the UK in February and wondered what on earth there could be to see in the middle of winter.

“I discovered swathes and swathes of snowdrops with people on the floor getting right up close to see them and photographing them with such enthusiasm. There was such variety. There were some on sale and the cheapest pot was £5. I bought four of them and it got me hooked.”

As soon as autumn comes, she says she and her fellow snowdrop enthusiasts look forward to the winter: “The ‘Silly Season’ starts for the galanthophiles. Our knees and noses are brown from gazing at our beloved babies. We salivate in anticipation of what delights the next five months will unfold.”

She says that apart from them being such a beautiful flower which gives joy throughout the bleaker winter months they are fascinating because of their variety. “Their height can range from 4cm to 35cm. There are elegant single ones, doubles, double doubles and the variations are fabulous. If you have a clump of any of them, they make quite a show.”

They are usually predominantly white in colour tinged with green, but a renowned plantsman in the UK, Joe Sharman, who is nicknamed Mr Snowdrop sells new coloured cultivars with yellow in them. He has also developed the first pink-flowered snowdrop. In his catalogue he says it is reliably pale pink and flowers at the end of September. It needs a lot of leaf mould and must be grown in part shade.

Enthusiasts can pay very high prices for just one tiny bulb. Sheila Cole says the highest price she knows of is £1,300. She increases her collection every year and is on email listings for reputable nurseries. She says it is quite difficult to get on to some of these mailing lists but says it is not surprising that the prices are so high; “This used to be an interest confined to the very wealthy, and it is only in recent years that members of the public have been able to get into the world of plant collections. We hear stories of people stealing other people’s rare plants. That too has been going on for years. The famous plantsman E. A. Bowles (1865-1954) used to number his snowdrops so only he could identify them and so tell whether any had been taken. Where I live, in France, this is luckily not a problem.”

She says they are fairly easy to grow. As varieties come from all over the world, with species on each continent, she says that you can find one which will suit your soil and climate conditions. She has sandy, free draining soil on a south-west facing slope and the bulbs like it there.

“The important thing about snowdrops is that the bulbs should never dry out. Unlike tulips and daffodils, you should not buy them as dry bulbs. There is some debate over whether it is best to plant them as bulbs in the summer or just after they have flowered. I think it is best to buy bulbs as, unless they have been grown in pots, plants may well have had their roots damaged when they were dug up.”

The bulbs are available in July and August and Mrs Cole says that if it is dry, it is best to plant them in pots first before putting them out in early autumn. She plants hers in aquatic planters which she sinks in her flower borders. She separates different varieties to avoid cross pollination. “You must put them somewhere where there is shade so they will not dry out. Mine get watered during the summer as they are in the beds with my flowering perennials.

“After they have flowered it is important not to cut the leaves off but to let them die back naturally as they send nutrition back into the bulb. After flowering I put on a handful of blood, fish and bone mix as a feed for the next season. They need dividing every three years, or they will grow blind [without flowers].”

She says they are good survivors: “They have very few predators. Squirrels may move the bulbs around, but will not eat them. Mice may eat the bulbs but I do not have that problem. Slugs will eat the flowers. The narcissus bulb fly larvae is the one pest I know of which may attack snowdrops.”

Choosing a favourite is difficult: “My latest acquisition is a Green Tear and it is stunning. The Three Ships is a good one to have as it is always in bloom for Christmas, whatever the weather conditions. Little John is a hybrid cultivar and with the right conditions grows to a height of 25cm and Vic Horton features twisted leaves. My Vic has a yellowish hue to the ovary. A clump of any of them is fabulous, including the most common variety, the Galanthus nivalis.

To visit Sheila Cole’s garden in February please ring 05 55 60 67 40 or email lavenderflowerpot1@orange.fr. For details of all Jardins Ouverts/Open Gardens to visit, see www.opengardens.eu.