Pull up this plant linked to severe pollen allergies 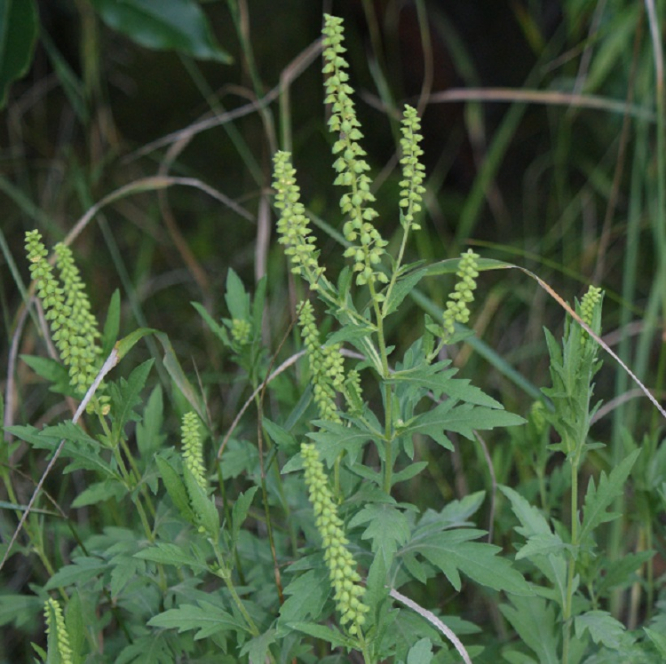 Ragweed is a major cause of allergies
By Jane Hanks

An invasive plant spreading across France is posing a nasty allergy risk in late summer and autumn and should be pulled up wherever they are found, activists say.

About 12% of the population are vulnerable to the effects of ragweed – ambroisie in French – which are similar to hay fever with runny nose, sneezing, conjunctivitis, dry throat, eczema and, for the worst affected, severe asthma attacks.

The problem is becoming so serious that an official advice website has been set up at ambroisie.info by the French agricultural research institute, Inra.

However despite this, campaigners Stop Ambroisie say not enough practical action is being taken to tackle it.

Its president, Philippe de Goustine, set the group up after he moved to Saint-Jean-de-Muzols in the Ardèche, where the plant has become widespread.

He has suffered from allergies ever since, which have now led to asthma attacks during the season.

He said: “I think we need a national plan to eliminate this health hazard but the authorities don’t seem to be interested and I don’t think that even local legislation is properly implemented.

“Switzerland and Canada both have plans which are beginning to show results.

“My advice is destroy the plant if you see it. If the flowers haven’t developed you can simply pull it up, if you find it later in the season it would be better to burn it. I have warned the authorities that if they don’t do anything soon, the plant will be naturalised and it will be too late.”

Unlike many pollen allergies which are common in May-June, ragweed allergies start in mid-August and can continue until October with maximum intensity in September. During this period it is the principal cause of allergies.

It is most widespread in the Auvergne-Rhône-Alpes region though there are signs it is spreading to other areas of France.

The Rhône department has been fighting the problem for 15 years. Landowners, farmers and building site managers in the area are responsible for destroying any plants they find and if they do not, the mairie can do so and pass on the costs to the owner. Roadside verges are cut at specific times to get rid of the plant before it flowers.

Ragweed was introduced into France in 1863 from its native North America and began to spread in the 1950s and onwards, due mainly to construction activity and mechanised agricultural practices. The seeds are not transported in the wind or via animals but in earth stuck to lorry and tractor tyres and through cultivation of land which brings the seeds to the surface and allows germination.

It is commonly found on agricultural land, along roadsides, construction sites and wasteland but can also be found in gardens.

The plant grows to an average height of 70cm though it can reach 120cm.

It is bushy at the base and has large, fronded leaves. The flowers grow in spikes up to 4cm long and are initially green, but later turn yellowish green or brown as they mature. The male flowers produce the fine yellow pollen that is easily carried in the wind and which brings so much discomfort to people. One plant can release a million grains of pollen and 5 grains/m³ can cause an allergic reaction.

In North America up to half of all cases of pollen-related allergic rhinitis are caused by ragweed.

Another plant to be wary of is the fig tree which has a vicious sap best avoided as it can cause acute painful burns and blisters.

Dermatologist Dr Lydie Barelli in Nice told Connexion anyone who is in contact with the sap can be affected. The condition, known as a phytophotodermatitis, is caused by a chemical known as furocoumarin or ficin which is activated by sunlight.

“The properties of the sap have been well known for many years,” said Dr Barelli.

“People in the countryside used to use it to burn off warts. I would advise anyone who wants to collect figs to wear gloves and wear long sleeves and trousers if they are pruning.”

The sap is present in the wood and the leaves but not the fruit. The effects can be extremely painful and should not be ignored.

“The best thing to do is to see a dermatologist as the most effective treatment is a cortisone cream, for which you need a prescription,” Dr Barelli said.