Sowing a biennial trinity for June 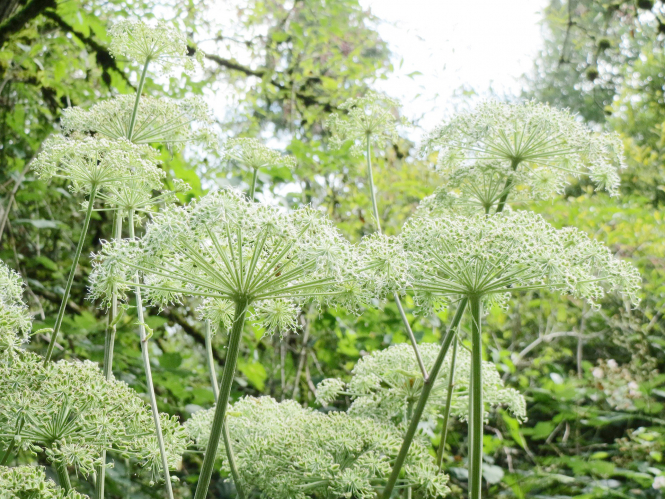 Repetition gets a bad rap these days... but how can anyone arrive at near perfection without it? A garden in which a shape, colour or pattern is repeated is a million times more satisfying that one in which various disparate elements are dotted about. It will be ‘easy on the eye’...

Of course, repeating things in the garden involves buying more than one plant and that can be costly. So I’ll share a small memory... never was my French garden so lovely (or so restful) as the third season after I arrived.

The previous year, I had decided to quickly ‘colour my garden’ and focused on growing a large number of biennials (plants which flower once, set seed and die). I prefer biennials to annuals, since they gift you the aura of a well-established herbaceous border, rather than a bedded out scheme.

Choices – well, purples, lime greens, bronzes and pinks are my favourite colours for a June garden, so I went with my colour palette instincts.

My chosen were Hesperis matronalis, Angelica sylvestris and Salvia sclarea. All grown from seed for the price of three packets – and round about now, in June, is the time to start thinking ahead to next year, since these plants will shortly start ripening seed.

It is worth noting that the best time for you to sow seed is often when the plant chooses to do it naturally –seeds are genetically adapted to make the most of the seasonal conditions in which they ripen. From now until late summer, biennial sowing is top of my agenda.

The Dame’s Violet (Hesperis matronalis) is a fabulous plant. The broad rosettes of mid-green leaves add a satisfying touch of solidity to any border and in June it takes off with pyramids of white or purple flowers, a little like old-fashioned ‘honesty’ (Lunaria annua), but without the papery, coin-like seed pods – and more ‘full on’ in flower power!

There’s nothing to beat Angelica sylvestris for adding a bit of drama to a border – at well over 1.5m tall, with imposing umbels of lime green in May/June, the flower and form look perfect with the frothier Dame’s Violet. And they readily self-sow, even on my clay (although the traditional plant of kitchens, Angelica archangelica, is more reluctant).

There is a greater choice of angelica these days. Try Angelica gigas, with deep purple stems and flowers. Or a luscious A. sylvestris selection called ‘Ebony’, with almost black leaves and pink flowers.

Angelica belongs to the Umbellifer (carrot) family and is a good example of a plant that relies on the freshest seed sown at the right time of year for maximum germination. It may be worth buying one plant and sowing your own fresh seed.

Talking of carrots, there are now some rather fabulous versions of the wild carrot (Daucus carota) about, well worth inclusion in a wilder herbaceous border – try ‘Purple Kisses’.

It is fairly easily grown from seed sown in late summer, when it will germinate immediately. Seed suppliers of this subtle but captivating biennial include Sarah Raven and Seedaholic.

Clary sage (Salvia sclarea) was the last of my biennial trinity and, with the angelica, the one that has stood the self-sowing test of time. It does not smell too nice close up, but plant it where the sun can shine through purple-pink bracts in the evening and you are a believer none the less.

To add my touch of bronze I purchased bronze fennel (Foeniculum vulgare ‘Purpureum’). This delightful, feathery foliage plant is a thug at putting itself where it is not wanted. And so hard to remove – although you could try one of those little tools for whipping out dandelions.

But I must have a very forgiving nature, since I know the hassle has been worth it when I see the way it showcases pink roses or peonies.

My pedigree rose of the month is...

‘Cuisse de Nymphe’ is also known as ‘Great Maiden’s Blush’ in English, but the French name is much more fun, albeit a tad racy. And it perfectly describes the delicate but vital rosy-white tones of this rose, the same colour of which Renoir was so fond. ‘Cuisse de Nymphe’ belongs to the old group of Alba roses, cultivated in European gardens from the fourteenth century.

These tall shrub roses with pretty blue-grey foliage do not really need pruning – and are sometimes considered unsightly after they’ve completed their June flourish.

To my mind that’s a little silly. They are crying out for companionship with one of the late-flowering Clematis viticella, starry-flowered little clematis that can be pruned hard back every February, making them excellent shrub friends.

Areas where bulbs have been naturalised in grass can safely be mown from the end of May.

OVER TO YOU
Give me your stories about the dreaded box blight and box tree caterpillar... how bad has it been and how do you cope? Have you tried a box replacement? I am trying yew and Euonymus japonicus ‘Microphyllus’.
You can send me an email at: editorial@connexionfrance.com.