Vision of a princess: Spectacular and pioneering garden in Normandy 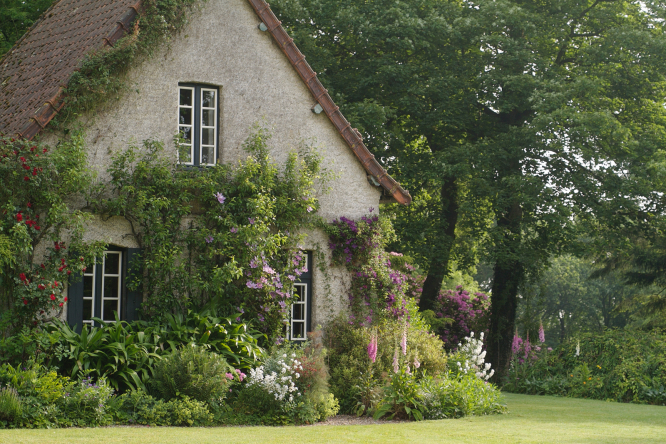 The work on Le Jardin de Vasteriva has been carried on by Princess Greta Sturdza's faithful team of gardeners since her death, aged 94, in 2009, and it is open to the public for visits and workshops on her gardening techniques.

Princess Greta Sturdza bought the property with her husband, Prince Georges Sturdza of Moldavia, from a composer in 1955 and spent the next fifty years transforming 12 hectares of thicket into woodland gardens and introducing more than 7,000 species and varieties to provide interest throughout the year.

She developed a unique style. Her main beliefs in the garden were: careful and prepared planting to give a good start to young plants; mulch to protect and enrich the soil and make it easier to keep the weeds down in the borders; and avoid watering during the summer. She was passionate about botany.

She was a perfectionist and harmony in the garden was her main concern.

'Princess Greta Sturdza wanted to be able to go to any part of the garden, at any moment of the year and be rewarded with a beautiful perspective'

Anything that might spoil that, a yellow leaf on the lawn, a dead branch or a flower that was over was immediately taken away. This perfection became legendary.

The Princess never employed many gardeners as she always did a lot of the work herself, dead heading and mowing between the visits that she guided.

Didier Willery was one of the gardeners who worked with her for several years and is now head gardener. He says there is no doubt she was a pioneer in understanding the natural processes which make a healthy soil: “She introduced the idea of mulch, when she covered the soil with autumn leaves in the 1960s, when everyone else was clearing their soil to make it bare and “clean.”

“Our planting techniques have evolved, but we still observe nature to learn the best methods, as she did, putting a great deal of importance into the quality of the roots and the way they develop in the soil.

She also developed a unique form of pruning to let in the light and the rain, called transparency pruning: “It has both practical and aesthetic advantages. It allows the light and rain to penetrate right down to the soil which means there can be seven layers of plants, one above the other. And also because you can see through the trees and bushes to see the colours, forms and textures of other plants further away.”

Her first influences came from British gardeners like Lionel Fortescue and Sir Harold Hillier: “They were her first mentors, giving her basic advice and introducing her to several plants which did not exist in France at that time. Lionel Fortescue passed on his ideas of discipline and constant research to improve, but I think she was already a perfectionist and his words only supported her own ideas.”

Princess Greta was continuously curious and never stopped introducing new specimens in her garden. Some, when she introduced them were rare sights in the 1980s: Cornus controversa ‘Variegata’, known as the wedding cake tree because of its distinctive, horizontal tiered foliage; winter flowering mahonias and Viburnum plicatum, the Japanese snowball shrub.

More recently she was attracted by Japanese maples, magnolias, ferns and hellebores, bringing in the best species from all over the world.

Her aim was to have a beautiful garden all year round. She introduced new varieties not to create a collection of particular species but to have specimens in flower for as long as possible. For example, her range of around 700 rhododendrons means there are some in flower from Christmas through to at least the end of September.

Her particular method of pruning applied to hydrangeas ensues there is spectacular flowering – many lasting until December. There are more than 300 maples, most of them Japanese. Some are rare specimens, some are evergreen and others have decorative bark.

Hellebores were one of the Princess’ favourites and they cover the ground under the witch hazels and magnolias from February to the beginning of May.

There are also many different varieties of viburnum, silver birch, pieris, skimmia, deutzia, conifers and other rare plants which came from her travelling botanist or nursery garden friends.

Mr Willery says she had a complete understanding of every single inch of her garden: “She knew the qualities and difficulties of each and every spot, and she knew everything about all the plants that were there. She was attentive to both detail and the overall impression. It is very rare that gardeners can do both. She was not against trying out any plant, and it did not matter whether it was rare or ordinary. It only mattered whether it added to the beauty of the garden or not. She also had a great love for nature and succeeded in creating a very natural space in harmony with a very rigorous programme of care.”

He says amateur gardeners can learn a great deal to take back to their own garden from Le Jardin de Vasterival:

“It usually leads gardeners to think about the way they garden, because here they can see new techniques to create beauty which are simple, but very effective. Princess Greta Sturdza developed a unique style of planting which cannot be found anywhere else.”