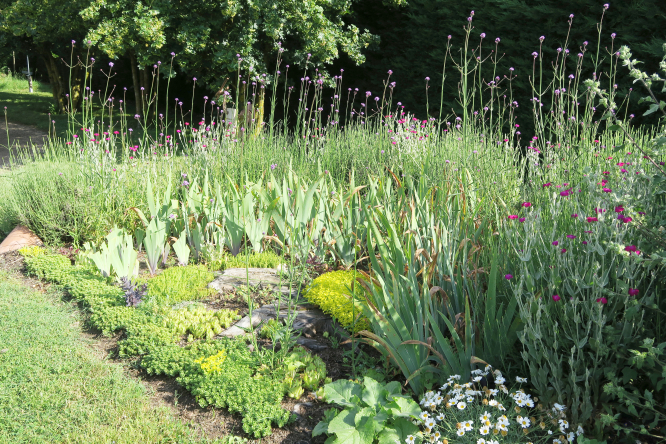 Gardens are open every Saturday and two Sundays throughout France in August as part of the Open Gardens/Jardins Ouverts scheme, which encourages gardeners of all nationalities to open up their gardens to the public, and raise funds for charity.

There is also the Anniversary card, which costs €35 and gives access to privately owned gardens as well as a growing list of prestigious French gardens, which usually charge an entrance fee but are offering Open Garden members free entry with the card.

President Mick Moat says he is thrilled that 40% of gardens this year are French owned, meaning it does not remain a purely British initiative. In 2018, Open Gardens aims to have 200 gardens in 33 departments. Last year they were able to hand over €23,500 to 11 French charities.  www.opengardens.eu

Dominique and Marie-Odile Birault do hardly any weeding or watering, a little planting, often with seeds they have collected and just a bit of tidying up. Most of their plants are perennials that grow in their region, so they thrive without any special care.

They bought their house with its 3,000m² garden in 1991. It was already well established with a collection of trees which are now 50 years old.

Among them are some rare species including one of their only exotic plants, an Algerian fir, which is in danger of dying out in its native Atlas Mountains. There is also a pond in the garden with water lilies and irises and three areas which are left completely natural.

They have introduced flowers for colour in late summer and autumn such as asters and sedum as well as buckwheat, which is grown on farms locally, but which they plant for its flowers which continue on into October.

Mr Birault says they have always gardened like this: “We have always had a good mix of trees and companion planting long before terms like permaculture were introduced.

“We realise we are lucky because we have the luxury of space.”

Above all they love being in their garden: “The greatest pleasure is to be able to observe what goes on.

“In particular, we love watching the wildlife.

“My wife goes out with her camera three times a day and she is always discovering new insects.”

Mr Birault calls his garden Le jardin des plants magiques. “We found we were surrounded by magic plants which have had the same properties attributed to them since 3,500BC.”

They also have a vegetable garden: “It is important to show the grandchildren where their food comes from.

“The garden is good for us physically because it is healthy to work outside and intellectually because there is always something new to learn.”

This is a relatively new garden which the owners started work on in 2016, but it has already won the Best Village Garden award for Saint-Vitte-sur-Briance. It is surprisingly well established but there are also plenty of annuals while the perennials and shrubs grow to full maturity. In August there will be colour from geraniums and nasturtiums and Lorraine Allsworth hopes her roses will still be in bloom, as they were in August last year.

She said the garden is a real challenge because it is on a slope: “We have a flat part at the top so we have somewhere to sit and we are putting as many plants as possible on the slopes to cut down on mowing.

“There are not many Open Gardens in our area, but we are not far from exit 42 on the N20 near Limoges, so would love people to pop in on our Open Day, and maybe combine it with another outing.”

There are five acres of garden which have been created out of what was a wilderness of brambles and nettles 11 years ago. Owner Edward Moss says it is a place where French formality meets English eccentricity so that hiding behind clipped hedges are huge herbaceous borders.

It is full of surprises, with holes cut in hedges to give new vistas, wild flower squares, a “spikey” gravel garden, a lake, a secret grass garden, and when you step into a 44m long, roofless stone barn you discover a new garden with a pond and what he calls a faux tropical area because the walls create a micro-climate.

In August his “vulgar bed”, packed with dahlias will be in flower while behind the barn there is an area with asters and verbena.

Classed a Jardin Remarquable this nine hectare, 19th-century garden has recently been renovated by its new owner after it had been neglected for 50 years.

Véronique Delvaux calls it a garden of trees and has introduced around 150 more to the collection. Colour comes from plenty of flowering shrubs such as viburnums and hydrangeas.

Contemporary outdoor sculptures are sited throughout the garden. There is also a 250-seat theatre and a maze planted with 1,200 olive trees, as well as lakes and a serpentine stream.