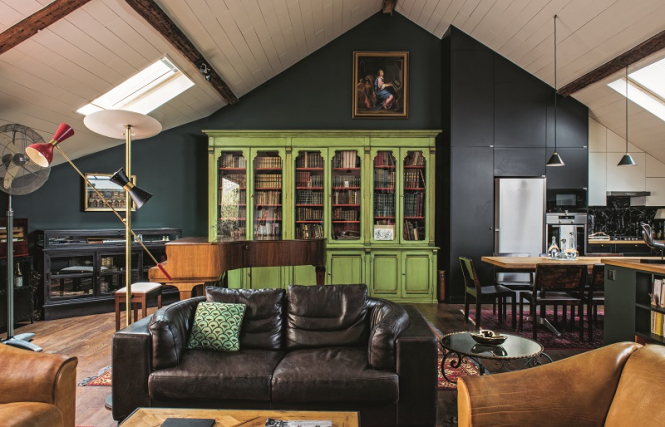 The twenty-five Parisians featured in this book come from a wide range of backgrounds, but they are all united in their love of Paris – of its architecture, the harmony of its eighteenth-century façades, the elegance of its squares, in how much it means to them, how happy they are to come back after being away, and in how much they love and admire the city of light.

For them, it is the only place to be, synonymous with the worlds of fashion and culture, where they find inexhaustible inspiration.

They can take sustenance from its great museums and art galleries and can indulge their tastes and passions in its private galleries, antique stores, and flea markets – as the reader will see from their highly individual and distinctive living spaces, where past and present come together in collections of every variety, and where a wide range of sensibilities and ideas, whether classic or crazy, find expression.

Some of these spaces are startling, none of them are dull.

Many display an exhilarating freedom in their interpretation of a style or era, and in their happy marriages of disparate influences, such as furniture by Jean Prouvé with sculpture by Takis; a table by Ingo Maurer with a bowl by Jean Puiforçat; a chair by Claude Lalanne with a painting by Christian Bérard; a Venetian commode with a vase by Robert Zakanitch.

Whether assembled with patience or brought together by serendipity, furniture and objects reflect each other with a quintessentially Parisian poise and elegance.

Some reveal surprises that may appear bizarre, even disturbing: a life-size figure smothered by an inflated inner tire, or a human head concealed among waving grasses, or a mummy.

The elegant home of conductor

Marc Minkowski’s neighbourhood is haunted by the shades of writers, artists, musicians, and composers, including Halévy – whose opera La Juive he will soon be conducting – and Bizet, who composed Carmen there; André Breton, who lived up the road; and Toulouse-Lautrec, Charles Gounod, and Richard Wagner, who lived down the road, later to be followed by Xenakis. And the Palais Garnier opera house is around the corner.

Music occupied his every waking moment, until he found a way of combining all these passions – the libretto, the drama, even sometimes the horse-riding – in the world of opera.

He speaks of his parents, who were great music-lovers; of Michel Rothenbühler, an inspirational teacher at his Paris school, the Ecole Alsacienne; of Jean- Claude Casadesus, his long-time friend and mentor; of Charles Bruck, who welcomed him into his conducting school when he was a young student in New York; and of Edith Wade, the New York violinist who was his grandmother, whom he scarcely knew but to whom he owes so much.

Friends describe his apartment as a “chic junk shop.” He likes to be surrounded by things, which he arranges in his own improvised, ad hoc style.

He files paper items and chargers in a set of post-office sorting cubbyholes that he found in an antique store in Amsterdam. He hides away the bags that clutter the house, an obsession of his, in cabinets designed for storing gold ingots in bank vaults: “The metal grille is in the industrial style that didn’t do much for me twenty years ago, but then gradually, as I moved into lofts and other spaces…

Some are souvenirs, scientific, artistic, or ethnic in their origins; others, many of them gifts, are inspired by his love of horses.

The bookcases, crammed with books and scores, are a comforting presence; the music system is discreetly placed; and a display case houses a fine collection of conductors’ batons from earlier eras, which he hunts down in junk shops, salesrooms, and antique stores in Vienna and elsewhere.

Made of precious woods, sometimes embellished with engraved silver mounts, the batons are relics of a tradition that has its origins in the nineteenth century and is now – when a pencil often stands in for them – dying out. From his many travels he always brings home an assortment of odds and ends.

“Here, for instance, there was a dance hall, a sculpture workshop, and an architectural practice.”

The wall surfaces were designed to accommodate store fittings such as the original drapers’ shelves; and when he moved in, he found not only a trunk that fortuitously bore his own initials but also the wooden kitchen table, complete with drawers and attached foldaway seats, that is now his desk.

On the walls hang paintings of Wilhelm Furtwängler at the conductor’s podium; a concert at Carnegie Hall; and a portrait of the Duchess of Maine, depicting the famous hostess of glittering artistic and literary salons at the Château de Sceaux in a nocturnal landscape with a lyre and a quill, her eyes heavy lidded and sleepy. This last painting has followed him on all his moves.

We have scoured the French high street and online to steal the style of the conductor’s lovely Parisian pad...

Prices and availability correct at time of going to press.

Get the green light

You need not break the bank, however.

Lounging around in leather

For old library elegance in your sitting room, track down a brown leather sofa with a lived-in look.

This Winconsin Canapé club comes in 2 or 3 seaters.

Understand Currency Exchange
More from Shopping
More from Connexion
Get news, views and information from France
Join the newsletter
Subscribe to The Connexion