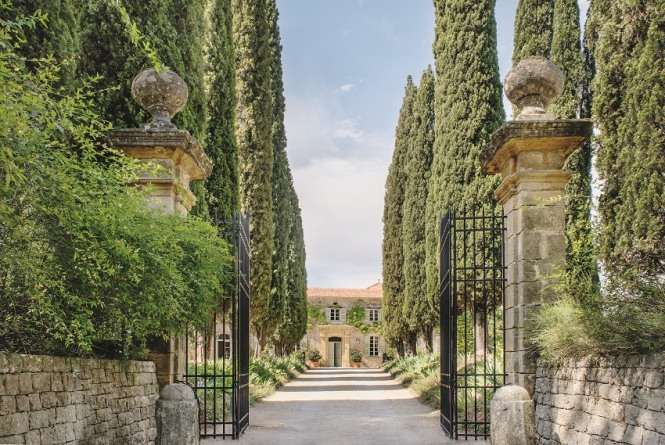 At physical remove from Paris and light-years from the action on the Côte d’Azur, the nineteenth-century bastide La Colle Noire, near Grasse, emanates the spirit of Dior. Its vineyards, olive groves, Renaissance stone lions, and shaded Italian garden mingle past with present. Cool tiled hallways, glimpses of linen velvet, and Emilio Terry influences add calm and charm. If his house in Passy was a civilized nest amid the demands of Paris and Le Moulin du Coudret represented an escape from the city, La Colle Noire, with its solid dignity, was Dior’s chosen home.

Purchased in 1950, the coaching inn turned manor house was Dior’s final domestic creation, and still a work in progress at the time of his death in 1957. Just as another of his last creations – the 1957 city dress “Palais de Glace,” with tidy bodice, slender sleeves, and meticulously gathered skirt – signalled in its sobriety, beauty, and understatement a return to the vision of 1947, the stone house represented permanence. Its atmosphere of storied family house, mixing antiques with the occasional surprise, was gracious and unaffected. Dior, who planned to retire to La Colle Noire, was so dedicated to the house that he eventually sold the mill at Milly to underwrite the renovations, the cost of which, as typically happens, exceeded expectations.

Approached through an allée of cypress trees, the house sat on more than a hundred acres of pleasure garden and working land, accompanied by gravelled terraces, a private chapel, and views across the valley. Dior installed a 150-foot reflecting pool that ran the length of the house. For parties, he illuminated the pool with fifty candled hurricanes around its perimeter.

André Svetchine, the Nice-based architect who had designed Raymonde Zehnacker’s nearby country house, provided Dior with plenty of rein to play gentleman architect. In fact, Dior conceived much of the house on his own, often relying on Svetchine and interior decorator Michel-Jacques Marsan more for execution than conception.

For construction, as for couture, Dior was a curator of time-honoured craftsmanship. He required the use of old materials or, at least, materials made in the old-fashioned manner, whenever possible. Fortunately, Svetchine proved adept at sourcing local and antique elements that reinforced the ambience of an old manor house. Glazed Anduze planters flanked the door, and a new gravel forecourt greeted arrivals.

Throughout the house, white walls, grey panelling, and terracotta or white stone floors, or some combination thereof, weave simplicity and continuity into the décor. Following the notion of a provincial manor that has evolved over the years, formulas were relaxed, never strictly enforced. Periods, styles, colours, and types of rugs varied; the only cardinal rule was that the ambience remain polished but unpretentious.

Decoration proceeded slowly, in part determined by the renovation schedule. Because of a delay in the electrical hookup, only two rooms were habitable as of 1956. With such a leisurely pace, the loose accumulation of furniture gave the impression of having been amassed over generations. Except for one chair by Séné, the furniture was warm and burnished but far from museum quality, generally eighteenth- and nineteenth-century French, with the occasional Biedermeier chair or Continental piece for variety.

With its waxed tiles and patinated furniture, La Colle Noire conveys Dior’s response to postwar reality. Instead of falling back into familiar routines after the war, the world had rushed forward into uncharted territory.

Europe integrated warily, colonies sought independence, the Soviet Union loomed as the new world menace, and the economy transitioned to industrial production. In this mid-century flux, as patterns changed and the pace picked up, Dior was a conservator of enduring custom.

A fashion genius coupled with conscientious businessman, Dior worked incessantly in this new economic climate, designing collections, developing perfume, and licensing new global products, leaving him less time to pursue the friendships, gardening, antiquing, music, and quiet he craved. Others found themselves with less wherewithal, and even less inclination, to observe the niceties of the past.

Even Maison et Jardin, the glossy broadcaster of aspirational decoration, vaunted a plastic tablecloth that could be cleaned with the swipe of a dishcloth. Jewels, hats, and gloves, those precious accoutrements perfected by centuries of patronage, with techniques conserved from generation to generation, were called into question. Emblematically, the actress Grace Kelly, a Dior client, though engaged to a prince, was photographed for Vogue without adornment, just bare shoulders, blonde hair, and American fraîcheur.

Quality, time, and heritage, those hallmarks of Dior, were the new luxuries. Now, interiors and clothes that were in sync with the time were comfortable and timeless, without gimmick or artifice. Frivolity, Dior determined, was passé, and as an artist, he reflected his time. His pet model changed from the aloof Renée to the accessible Victoire. He streamlined his 1954 collection into the quiet H-Line.

Dior was – both as a professional couturier and as an individual – a believer in the accomplishments of French civilization. The hand sewing, beading, embroidery, solid construction, and line of a Dior dress were rooted in French history.

So, too, were Dior’s courtesy, table, and interests in art, music, and antiques. La Colle Noire, indifferent to fad, drew on French crafts in its construction, history in its furnishings, and tradition in its seasonal rhythms.

While timelessness emanated from the time-worn stone of Dior’s last house, its modernity was in its ease, adaptability to contemporary life, loose appropriation of the past, and embrace of its time. Its appeal, like that of the New Look dress, was that it fulfilled a need for romance.

With clever French high street and online purchases, you can effortlessly pinch some Dior country panache...

Prices and availability correct at time of going to press.

Anduze pots represent the ultimate in terracotta elegance for that Provençal garden look.

If walls could talk

Dig around brocantes or vide-greniers or a polished-up bedside table (chevet) or go for a modern/vintage take, such as this walnut ‘Berkeley’ model with criss-cross metal legs.

Understand Currency Exchange
More from Shopping
More from Connexion
Get news, views and information from France
Join the newsletter
Subscribe to The Connexion