A portrait of the artist as chronicler of things past 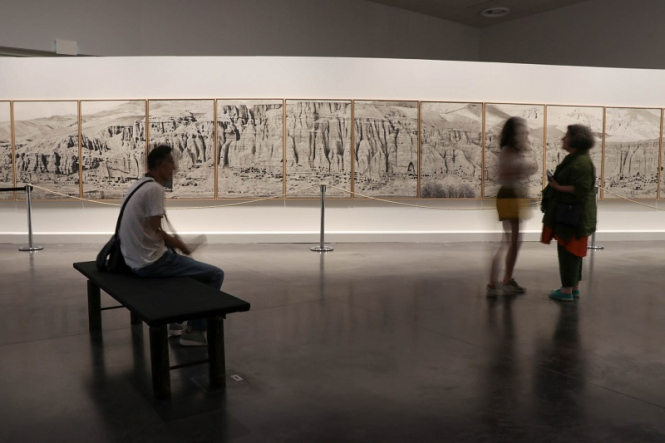 The Buddhas of Bâmiyân, which are on show at Lascaux IV until January 5, 2020
By Jane Hanks

He is well known for works which reveal shocking aspects of modern history, bringing the public’s attention to actions which we might otherwise ignore.

His work has been shown in major galleries in France including the Centre Pompidou and the Grand Palais, as well as galleries across Germany, Italy and Japan, and in New Delhi, Moscow, and Brussels, among many major cities.

He lives and works in Biarritz, but came to the Dordogne to inaugurate his exhibition at Lascaux, the Buddhas of Bâmiyân.

Tell me about the background to this work

The Buddhas of Bâmiyân were two monumental statues sculpted into a cliff face between the third and seventh centuries in Afghanistan.

They were 55 and 38 metres high, absolutely colossal. And they were destroyed by the Taliban on March 11, 2001.

Along the same cliff there were 750 caves, with sculpted interiors and frescoes which were also destroyed.

To me there was a strong link between that incident and the destruction of the Twin Towers exactly six months later.

I wrote about the mirror attacks, which attracted the attention of the French Ambassador in Afghanistan, Jean-Michel Marlaud, who asked me to produce a work of art in 2016 to mark the 15th anniversary of the destruction of the Buddhas.

How did you decide what to do?

It was a huge responsibility and I wanted to do something I felt could be useful.

I contacted ICONEM, a start-up which specialises in scanning heritage sites in danger, often in war zones to help preserve them for the future.

They agreed to take a 3D image of the immense cliff-face, useful for documenting what happened there.

I also wanted to get the sheer enormity of the site across, and thought photography was the way forward. I was able to borrow an immensely powerful camera, used to detect cracks in wind turbines.

We took thousands of photos, and 4,000 of these were selected to make a panorama of the cliff face.

It means that when you look closely you can see every detail, the individual stones and rocks where it is crumbling, a dog in a cave, people who still live there outside their huts, while at the same time you feel the huge scale of the place.

The image, though immensely detailed and clear, is sepia in colour. Why is that?

I have always liked mixing ultra-modern technology, with older techniques.

Once the panorama was created from the thousands of photos by skilled computer technicians they printed out a negative image.

This was laid out in fifteen different bands on to paper, which was painted with a heavy metal, palladium, and with an explosion of light, the positive image was developed in such an intense way, that the image is embedded into the paper. This is a technique which dates from the 1870s.

The ambassador was extraordinarily courageous to mount a project like this. It was a dangerous place to be.

When we arrived at Kabul airport there were armed military everywhere. We were provided with bullet-proof vests and a bodyguard.

We flew to the site in a small private jet. When we arrived, what struck me was the flatness of the open land, which came to an abrupt end with the immense cliff wall, and the mountains rising behind it.

It was winter, but the snow was far off, on top of the mountains. We were witnessing the direct consequences of global warming. Normally there should have been snow on the ground and it was 5°C – much warmer than it should have been.

People still live in these hostile lands, once a bustling place on the silk road between China and Europe.

They are the Hazara people, who are peaceful Shi’ite Muslims who are in mourning for the lost Buddhas, which were part of their daily life, even if they have a different religion. They live in extreme poverty.

Last year, there was a terrible famine in Afghanistan, which we hardly heard anything about in the West.

The local children followed us everywhere. They were beautiful and looked on with intelligence in their eyes.

What did you want to show in your artistic rendering of the site?

People should know what happened. Nearly all of the 750 caves were decorated with frescoes and sculptures.

The Taliban burnt tyres inside the caves so they are now covered in black soot and they threw their shoes at the walls in an ultimate gesture of irreverence which has left prints and which I show in another photographic image.

I also made a film which shows the people living there and which you can see at the exhibition. You can also see the 3D images created by ICONEM.

I am happy the photographs are at Lascaux, so they can be seen by a wider public than the usual visitors to an art gallery.

It shows how lucky we are to live in France, where sites like Lascaux and the nearby Roque St Christophe caves which were lived in for centuries, are preserved with vast sums of money spent on them.

There is a very powerful link. For the Afghan local population, it is as if their Lascaux was destroyed.

Much of your work seems to be that of a journalist, rather than an artist...

The difference is that journalists’ work is here one day and gone the next, whereas an artist hopes that the impression he gives to the public will be longer lasting.

How did you become an artist?

It was a natural step for me. My father was a painter and my mother was a writer, so I never questioned the value of becoming an artist.

I studied literature but at the same time created sculptures and works of art. I like working in wax and glass, which evoke time, light and the lingering after-effects of the past.

When I was a student in Bordeaux, you could live cheaply in the city’s beautiful, old buildings, and I covered one of the rooms, with its oak beams, entirely in glass sheets. But that was a long time ago!

Why did you decide to concentrate much of your work on global current affairs issues?

First, I drew on personal experience and objects close to the family.

Then I expanded to things outside my own life.

In the 1990s, my work began to involve analysis of images of current events, which I used while teaching editing to young students.

Images from the civil war in Algeria, the fall of the Berlin Wall, events in Palestine and Kosovo all affected me deeply.

In 2003, I was asked by the State to create a memorial to the Resistance members and hostages who were shot at Mont-Valérien between 1941 and 1944, which included not just the French, but also foreigners, Jews and Communists.

This caused a great deal of controversy at the time, which lasted for 15 years, and my sculpture was even covered in a tarpaulin for a year.

I had a huge bell cast for the Mont-Valérien memorial with all the names of the victims on it (pictured left and below).

I became interested in the history behind the non-French names on the list which led me to research and write a book about one of them, Joseph Epstein, a Jewish communist from Poland and a Resistance leader who has never had the recognition he deserved for his part in the Resistance.

I often accompany my sculptures and artistic creations with videos and books about the story behind the artwork.

What are you working on now?

I am researching a project on another religious heritage site which has been destroyed.

This time it is in Armenia, one of the first Christian countries in the world. I am fascinated by the close relationship between different religious cultures, as well the stark contrast of their clashes.

Crosses in Armenia rarely show the Christ figure, but instead are ornately decorated with images, which we associate more closely with Muslim art.

In 2006, it was discovered that a cemetery at Nouvelle-Djoulfa with 3,000 graves and their uniquely decorated crosses had been destroyed by Azerbaijan soldiers. It is thought it was bulldozed.

It is now a military zone, and inaccessible. The exhibition, Le Temps du Sacré, will first be on show at the Galerie Eric Dupont in Paris this October.

Why do you work with so many different media?

I like to mix a great deal of technologies because it is interesting to explore the way we look at a piece of work depending on how it is portrayed.

If we look at an image on an iPad we won’t think of it in the same way as if we see it on canvas in a church, or as a sculpture in an art gallery.

Is France a good place to be a contemporary artist?

I don’t really question it. I am an artist, that is what I do.

The general public have a huge suspicion of contemporary art, because it often involves huge amounts of money, and because they think it does not represent anything they can relate to.

But I have seen people in exhibitions by Daniel Buren, a French conceptual artist, overwhelmed by the sheer beauty and power of the image before them.

Money in art does not interest me.

There are great artists around. People did not understand Monet when he was first on show. Now he is very popular.

Banksy is an example of an intelligent artist who knows how to get the general public interested. He is one of the greats.

I also believe in education of art and created the Ecole Supérieure d’Art Pays Basque and an Audio-Visual BTS (Brevet de technicien supérieur).

What do you hope to achieve through your art?

I am not here to shock. I want to tell stories to try and understand and love this complicated world we live in without being provocative.

I want to communicate about the world as it is in all its complexity, its beauty, its grandeur, its terror.