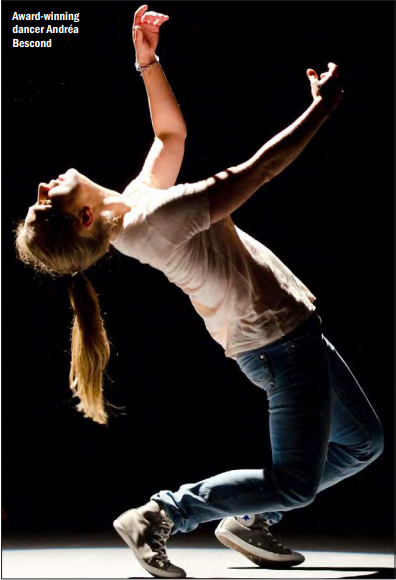 Ms Bescond suppressed the traumatic memories, which gradually came back in flash-backs.

At age 21 she accused her rapist, who was given a 10-year sentence. Ms Bescond has gone on to build a successful career – in 2017 she was made Chevalière de l’Ordre des Arts et des Lettres. However as well as choreographing and dancing she is also committed to changing French law, which she considers too lax.

“France is so backward concerning child abuse: 81% of sexual offences against minors happen in their homes, and the law as it stand does not protect them. Too many barristers defend the indefensible just for the money, and the law is bizarrely full of loopholes and get-out clauses, particularly where there is no physical violence.”

Her show Les Chatouilles tells the story of Odette, a child who is raped by a family friend, and her path through the subsequent guilt, self-blame, anger and pain to redemption.

“Doing this show is salvation for me. When I wrote it, this was all burning in my head and my heart, and putting all this anger and pain out there, writing it all, and concentrating on it, developing it into a real show was cathartic.”

Critics say it is technically brilliant, funny and touching. It won France’s national theatre award, the Molière, for best solo show in 2016.

“Every time I perform it, people approach me afterwards and tell me they’ve lived this too. It’s been hard to hear. My social media pages are jammed with victims.

“Child abuse is all over the place. I had no idea. I thought it was only me. But people from all backgrounds, all locations, all ages tell me they’ve been through this too.”

She adds: “Our world is hypersexualised, and sexual abuse dehumanises children, but through my dance we all share the experiences.

“It helps me to know there are others in the same situation even though it’s horrible knowing the statistics.

Ms Bescond deplores the fact that child sexual abuse not involving penetration is a délit not a crime (only rape, defined as involving penetration, and murder are categorised as the worst kind of offence - un crime) and that time limits mean some people whose memories of childhood rape have been suppressed cannot prosecute.

“Judges accept rape and sexual abuse, and send paedophiles to psychologists instead of jailing them, but since there aren’t enough psychologists these people just go free.”

Les Chatouilles was made into a film, released in 2018, and the stage performance was in London. “I’m really happy because it shows that the theme is universal. But I can’t just dance. I have to continue lobbying alongside other activists for changes to the law.

“Those who are over 28 are a sacrificed generation who cannot complain [due to current time limits on prosecution] but victims should be able to prosecute at any point in their lives.

“I want to see 15 as the age of consent with an exception for relationships between teenagers from 13-15 where there is a maximum three-year age gap between them. I want statutory rape to always be punished by a jail term, with no quibbles or arguments.

“In France men still kid themselves that romantic/sexual love is possible between an adult and a child, but it isn’t. A child is a child. And sex with a child should be a crime.”

No age of consent... and force must be proved in child rape

France has no legal age of consent, meaning there is no such concept as ‘statutory rape’ – it only has an ‘age of sexual majority’, set at 15.

In an ongoing case, a man (aged 28 at the time) claims his victim, 11, consented to sex. He is therefore accused of a sex offence against a minor (punishable by five years’ prison and a €75,000 fine) and not rape – in French law rape must involve force, threats or surprise.

In another case a man who was 22 was accused of raping a girl of 11 and acquitted on the same grounds. It was discovered when the girl became pregnant. The prosecution is appealing.

All sex involving an adult with someone under 15 (18 if someone in authority is involved, for example a teacher) is punishable, but unlike UK law, France considers a child may consent and the issue is considered case by case as with adults.

Outcry over the latest cases led to calls for an age to be set below which all sex is seen as non-consenting and therefore rape (this is 13 in the UK).

France’s Equality Minister Marlène Schiappa proposes an age between 13 and 15 and the government plans to introduce a law this year.

The UK has no prosecution time limit for serious sexual offences, whereas in France the victim may take legal action up to age 38 if aged under 15 at the time of the offence, or 28 if aged 15-18 for sexual offences against children.