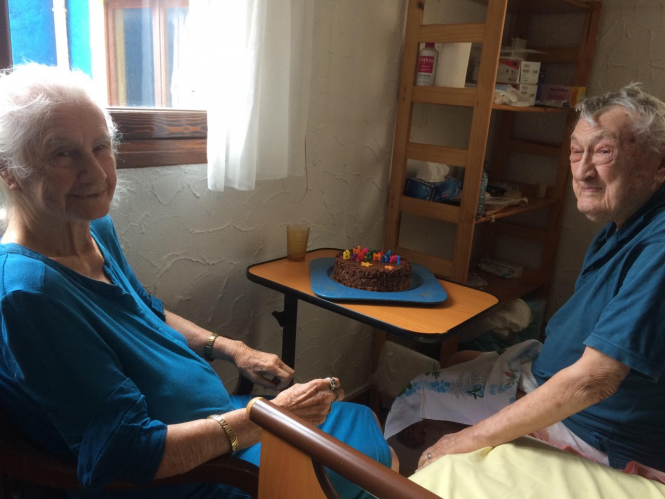 A British couple living in Cagnes-sur-Mer near Nice are celebrating their 71st wedding anniversary this month. Both are 95.

Their son, Professor William Mallinson, told The Connexion they are still very much in love.

“Their story is romantic and extraordinary,” he said.

“My father, David was born in 1926, in a small village in Cumbria and my mother, Tina, was a Greek refugee living in Rhodes, when it was under Italian rule.

“Her father was a refugee from Anatolia. David loved to paint and started studies at the Slade School of Fine Art in Londonl, but WWII intervened, and he was seconded from the Black Watch to the Indian Army in the Himalayan foothills.

“At the end of the war he was posted to Rhodes. One evening, his commanding officer ordered him to attend a dance, and it was there my parents met.

“They walked out together four times, and as they were always chaperoned by a member of my mother’s family, they were never able to kiss.

“My father had to leave for Germany and then the UK, but for the next three and a half years, they continued to write to each other.  In 1950, they married in Rome and moved to London.

“My mother, who speaks seven languages, had a successful career in the Foreign Office, and my father returned to the Slade art school. He produced several well received paintings, but he had to pay the bills, and so concentrated on his teaching career, ending up as Head of Department at Hounslow Borough College, where he established several new design courses, and an international reputation. He had a retrospective exhibition in 2003.”

The couple always enjoyed travelling in Europe with their two sons and daughter. In 2007, they decided to move abroad and chose the south of France, where they had friends.

“They have loved their life in Cagnes-sur-Mer and they have had wonderful care from the health service, '' Prof Mallinson said.

“My father fell over last year and he is now practically bed bound. But they are still in their home, where they want to be able to stay forever, with daily visits from a nurse and a home help.

“I live in Greece and go and see them whenever I can, and it is always a pleasure to see them lying on the bed, holding hands. Last year for their anniversary I asked both an Anglican priest and a Greek Orthodox priest to visit and they both turned up, blessed my parents and had a glass of wine. I hope to do the same this year.”

Prof Mallinson is a historian and writer, specialising in the Eastern Mediterranean. He has written a book, Thrice a Stranger, published by Cambridge Scholars Publishing, about his parents and his mother’s family who lived through turbulent times in Greece, Turkey and Italy.

“My parents are good, solid people, who worked for the British state,” he says. “They have had a rich and varied life. I think it is very special that this year their 71st anniversary is on August 17. The numbers 1 and 7, add up to 8, the sign of eternity.”

The longest married couple in France

David and Tina Mallinson have had an extraordinarily long life together, but incredibly have been married for over 11 years less than France’s longest married couple, Marcel et Berthe Brouard.

Today the couple live in Saint-Éliph in the Eure-et-Loir department in northern France (where they have lived since 1951), and have four children, eight grandchildren and one great-grand-child.

Mr Brouard says that he has enjoyed a simple life and loves the small delicious meals that his wife makes for them. Perhaps that is the recipe for longevity?

'Growing old is a pleasure and brings unexpected freedom'