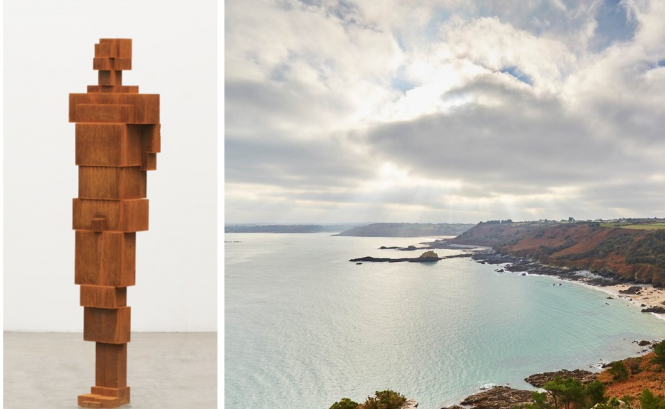 Giant statues similar to earlier works by artist Sir Antony Gormley could stare across the Channel towards Britain from islands off the Brittany coast, if plans go ahead
By

President Emmanuel Macron supports the project, which was born after Sir Antony was invited to France by Philippe Bélaval, chairman of France’s national heritage group the Centre des Monuments Nationaux.

Sir Antony revealed the plans on the arts podcast These Three. If approved, the sculptures will sit on an archipelago of small islands in the Baie de Morlaix, looking towards Britain on the other side of the Channel.

Many have said that the sculptures may be a statement against Brexit as they will face towards the UK in a “kind of farewell to the island from a country that is still part of the European Union”.

But Mr Bélaval said they are actually inspired by the Cairn of Barnenez, a Neolithic monument located in the bay, which contains 11 burial chambers and dates from 4,500BC. It is thought to be one of the world’s oldest man-made structures.

Mr Bélaval told Connexion how the project began: “Sir Antony is an artist I admire a lot and for a long time I was thinking about how I could bring contemporary art to megaliths in the same way that it’s now quite common to have contemporary art shows in historic buildings.

“I knew about Sir Antony’s projects and work in Britain along the coasts and I had the opportunity of meeting him at his exhibition at the Ropac gallery in Paris.

“I invited him to Brittany and we visited various places. He loved the Baie de Morlaix and thought the site was very interesting and promising. Since that time, we’ve been working on a project planned for 2021.

“The Baie de Morlaix is a place filled with very strong cosmic energy and he perceives that and is able to make something out of it.”

In an interview with The Observer, Sir Antony said the sculptures would be created from up to 30 slabs of iron, balanced in a humanoid shape on top of each other – similar to previous works by him. The final piece would stand up to seven kilometres out to sea.

He said: “They are sort of massive houses of cards, but made out of blocks that do actually cohere.

“They are an attempt to say something about the human condition – that we are all of us provisional.

“We stand up, but we are always in danger of falling over.”

Although not Brexit-inspired as first thought, the sculptures will foster a feeling of amity between France and the UK.

Mr Bélaval said: “I know that President Macron feels strongly about British artists being made to feel at home in France, even after Brexit, and we are doing our best to implement that with this project.

“I think that the ability for British artists to be able to work in mainland Europe, and vice versa, shows that there is a common belonging, a common culture, and a common civilisation between us.

“This sense of belonging cannot be affected by the changes that Brexit will bring.”

The Brittany coastal sculptures project is one of many Philippe Bélaval is coordinating in his role as chairman of the Centre des Monuments Nationaux, a position he has held since 2012. Connexion spoke to him about his work.

The centre is in charge of 100 monuments across France, including the Arc de Triomphe, the Panthéon and the towers of the Notre Dame Cathedral.

Many historic buildings in France fall into disrepair because they are not all publicly owned and there are not enough funds to renovate and maintain all of them.

The National Trust provides a solution to this for some buildings in the UK by charging an entrance fee or an annual membership. The money goes towards renovation and upkeep of the sites.

Asked if a similar organisation could help France, Mr Bélaval said: “The main role of the Centre des Monuments Nationaux is to manage monuments or sites belonging to the state or public agencies, but I think we now have the experience and the capability to be a kind of equivalent to the National Trust.

“However, I do think that France and Britain cannot be exactly compared because the relationship between a nation and its heritage is different in every country.

“The heritage of a country reflects so much of its ident-ity that, of course, the same solutions cannot be used in different countries and places.

“Even within countries, there is such a wide range of different factors which affect this issue and so I don’t think that there is a single financial answer to solve all of the problems at once.

“But we are widening the range of responses we have been coming up with to meet this challenge.”

He said he first became interested in France’s national heritage sites as a child, when he would accompany his parents to historic buildings and sites for days out.

He said: “I found those visits entertaining and I never lost interest in the subject, even when I was working in very different fields to what I do now.

“The problem now is creating interest in the younger generations. I admire people like [historian and heritage lottery organiser] Stéphane Bern and others who try to do this. We are a good team, as we are all very strongly committed to doing something for the nation.”