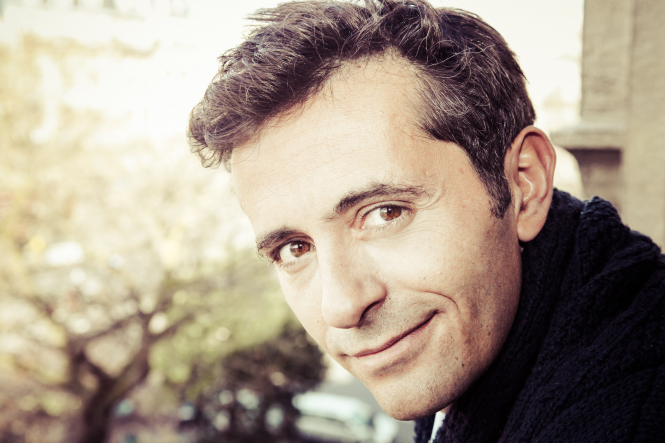 You have just landed in Paris. It is your first time. You are excited: it is the city of lights! The city of love! You get in the taxi, and with your best accent you say: “Bonjour!” Your voice is full of hope. The driver stares in front of him, says nothing. You arrive at your hotel, and cheerfully say: “Merci!” He continues to stare, and says: “€68”.

This rude awakening was what awaited Olivier Giraud upon his return from the United States, where he had just spent almost five years working in Palm Beach’s top French restaurants as a sommelier and restaurant manager. Shocked by the contrast with his time in America, Giraud realised what a brutal experience a first arrival in Paris must be for tourists and others who are new to the city.

There and then, he started writing a show based on the idea of teaching tourists, expats and his fellow Frenchmen from the countryside how to fit in. And perhaps teaching the Parisians a little lesson about themselves along the way...

The result is a runaway success. Four times a week, Giraud stands up on the stage of the Théâtre des Nouveautés to teach people how to be as arrogant and abrupt as a Parisian would be. And if that was not risky enough, he does it all entirely in English.

At the intimate, velvety venue, the audience pours in to the sound of peppy French jazz. Three South African men squeeze past an Indian couple, while a distinctly Parisian-looking woman lets two giggling girls through. An older couple in furs, some gay American men and a grey-haired gang of golden girls happily rub shoulders with lithe Argentinian men and a lady from the Ivory Coast.

Giraud makes his entrance, still bright-eyed and bushy-tailed after eight years of making Paris laugh. He asks the audience where they are from. The entire planet is represented here tonight. As he registers the countries being called out, Giraud stops: “Did I hear someone say Paris?”

A girl on the balcony shouts back, and when he asks which part of Paris, she answers: “The Yvelines.” Giraud smirks: “That’s not Paris, that’s the suburbs. A true Parisian would rather die than live there!” And with a complicit wink, he sets the tone for the rest of the show.

It is brutal and yet friendly, condescending yet inclusive.

In a highly-accented and easily accessible English, How to Become Parisian in One Hour guides the audience through ways to adapt their attitude to the city in eight practical lessons. In just over an hour, tourists become locals by learning what to wear – “black, or if you’re feeling a little crazy, a bit of grey” – and how to deal with shop staff  – “put your hand up and say ‘je regarde!’ quite loudly” before leaving the three outfits you tried out on the floor of the changing room: “It’s not your job to tidy them.”

The Parisian “bise”, Giraud teaches the audience, uses only two kisses to greet people – “three or four kisses mean you are from the south of France, they kiss more there as they have nothing else to do” – and in the Métro, the audience is taught how to “ignore the smile of the old lady next to you, she just wants your seat”.

To be truly Parisian, you should ignore pregnant women, too: “It’s not your fault she’s pregnant! She played, now she pays!”

Finally, after Giraud has managed to get the entire room to practise the perfect hair flick to get into the discothèque, he teaches the whole audience to pronouce, loudly and enthusiastically, the “p*****, m****” that should be shouted at the taxi driver that does not stop.

By now the room is hooked, and ready for one final lesson: how to climax in the bedroom – men repeat after Giraud the perfect sound of pleasure mixed with Parisian restraint, and for women, “only the slightest lift of an eyebrow is enough”.

Foreigners and newly arrived outsiders get an easy laugh from Giraud’s clownish imitation of the sometimes violent clash of cultures in the French capital. But surprisingly, even the Parisians get a chuckle out of the show. “I thought the French couldn’t laugh at themselves,” says Giraud,
“but I was wrong! There are a lot of Parisians in the audience. They come and say ‘Ahhhh, we’re awful!’ It’s an exaggerated portrait, but they recognise themselves well enough.”

According to the comedian, originally from Bordeaux, a Parisian is not just someone who was born in Paris: it is anyone who has come to the city and stayed. “Either you adapt, or you leave,” he says. “It was very hard when I left home. I was 18, and I couldn’t believe what life in Paris was like. I thought ‘I’ll never keep up’.” But he soon got into the rhythm, and after his stint in the US, he could think of nowhere else he would rather be.

“Some people can’t cope but I love it,” he says. “Now, when I go to the countryside, I can’t believe how long everything takes. Everyone chats for ages, it takes you three hours just to buy a baguette!”

Every day, Giraud gets new inspiration from walking around his adopted city. “I worked with Parisians for a long time,” he says, “and I observed the people I was waiting on, too. I still spend a lot of time in cafés watching people. It just came naturally to compare the experiences I had.”

It was not always smooth sailing, though. Before filling a 600-seat theatre four nights a week, Giraud had to fight just to put on a show at all. With the script under his arm, he did the usual rounds, trying to convince production companies to take him on.

They all came back with the same shrug, telling him a show in English would never work. Day after day, theatre doors slammed in his face.

Instead of giving up, Giraud simply rented a venue himself for one night, creating his own buzz online.

“It was a full house,” Giraud beams. “I worked like a madman on social networks and it ended up being so full that I had to do a second show to accommodate the demand.”

The success was so obvious that the theatre ended up asking him back themselves. Just a day a month to begin with, which grew to once a week, then three months at a time, then six. Now, he is hired by the year.

Two weeks into the production, Giraud spotted an American woman in the front row. “I ribbed her for the entire show,” he recalls, “As usual, I was trying to be sharp but kind. It’s a balancing act, but it was hard to gauge in the beginning. I still don’t understand why Americans don’t kill me at the end of the show.”

Whatever he said must have hit the right note: the woman turned out to be a reporter, and soon Giraud’s show had a review in the New York Times.

For sound and lighting, he turned to his wife, Claudie, who he had met when they worked together in the same restaurant in Paris. “She had never done anything like this before,” says Giraud, “but someone showed her how to do it, and she did great!”

Claudie produces Giraud full-time now. “We control everything from A to Z, and that’s much better for us,” says Giraud, who had the pleasure of putting on his show for the very people who turned him down in the beginning. “They came to see me, trying to produce me, but now it’s out of the question,” he exclaims.

Having your own production means a lot of work. “For eight years, we haven’t really had a holiday,” he admits. “When we do go away, Claudie answers the phone 24/7. The phone rings at 3am? She picks up. We give it everything.”

This work ethic is the very reason the show is still going. The material is hilarious, yes, but they are also tirelessly promoting the show.

“We are afraid that it will all end one day,” says Giraud. “But it’s good to be scared! You should never think that you have won!”

The Paris terror attacks in 2015 taught Giraud that. From one day to the next, everything had changed. “It was dramatic,” he remembers. “I was very scared to get back on stage. I thought: what’s the point of getting back up there and making fun of Parisians when they have just been through such atrocity? I cancelled for a week, but then I got back out there, thinking it would fail, and it worked. Better than ever. People just wanted to laugh.”

And they still do. Night after night, the room is full. Giraud’s crazy dream has already brought him an audience of over half of million viewers.

“I always knew I would be on stage,” he says. “I grew up in a building with 10 floors, and my mother sometimes came home a little later from work to find a house full of people. I would make my own flyers and put on a comedy show for the whole building. I would imitate the neighbours, tell secrets that I had overheard people tell my mother. She would get into real trouble!” Of course, Giraud’s parents did not really think a career in comedy was a suitable aspiration for an eight-year-old boy, so Giraud was sent to learn about the hospitality industry instead. But the boy told his mother: “One day, I will play at the Olympia in Paris, maman. And I will buy you a beautiful dress.”

In 2010, that is just what he did: filling the 2,000 seats of the iconic concert hall, Giraud fulfilled his childhood dream. His mother refused the dress: her son’s success was enough to satisfy her.

“It was a great day,” he recalls. “I was very relaxed. I hear people tell me what a stressful job this is, but I love it. It’s hilarious. I know the show works, so I’m confident.”

After every show, Giraud stands at the exit, taking pictures with the audience, asking questions about them with wide eyes and a cheeky grin, looking like a boy who can not believe he has been handed the keys to the sweet shop. “It’s been eight years, and I still can’t believe that it’s happening,” he smiles.

The audience leaves with a knowing grin, and as they shout “p*****, m****” down the street, they realise that at least one of the Parisians they met was not so unfriendly after all.