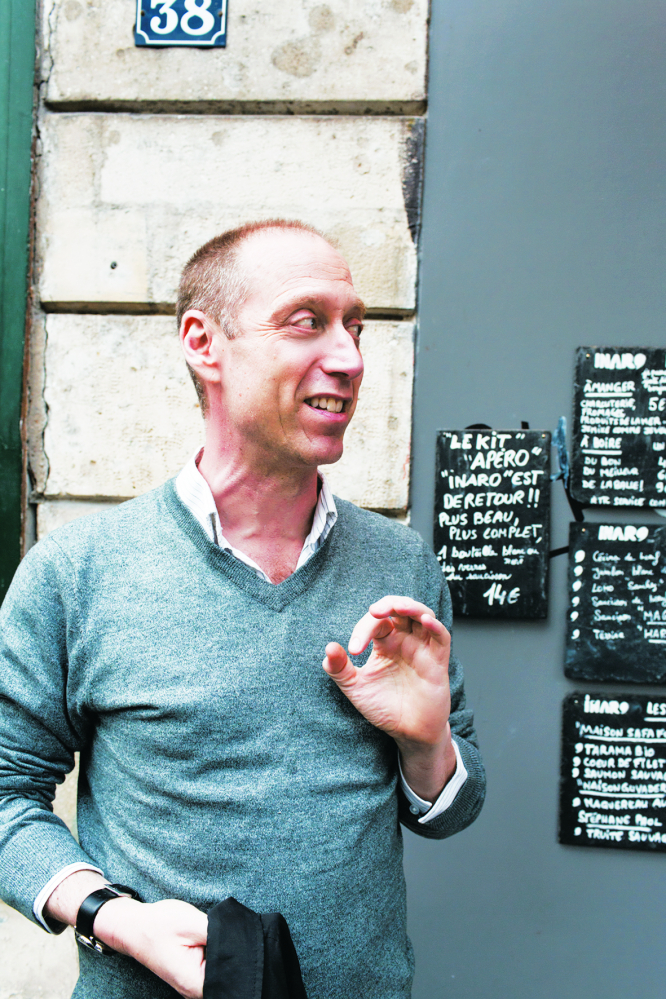 A man sits in a chambre de bonne apartment, overlooking the Paris skyline with the Tour Eiffel in his sight and taps into his computer. He has just finished cooking in his tiny kitchen with a temperamental oven, pans left to cool on the windowsill, and a work surface only just big enough for three bowls at a time.

He is David Lebovitz and he has just arrived from America where he had worked in restaurants from the age of 16 and ended up as a top pastry chef working in the prestigious Chez Panisse in Berkeley, California.

In his garret, he is creating one of the first and now one of the most famous and most followed food blogs across the globe.

Since those first recipes posted on line he has been able to move out of his garret existence and into an apartment with a real kitchen. He tells the story of the ups and downs of that move in his latest, witty book L’Appart: The Delights and Disasters of Making My Paris Home.

How and why did you get involved in writing a blog?

I had just written my first cook book, Room for Dessert, and I thought it would be good to use this new medium, the internet, to communicate with readers.

I often think people find it frustrating when they try out a recipe, and so I wanted to be able to answer their questions. I wanted to make people happy cooking my recipes. Friends said I was wasting my time, as it was a new idea back in 1999.

It started as a website and later when technology changed, around the time I came to Paris in 2004, it turned into a blog.

People ask me now, how do you write a successful blog and I tell them it is not instant, you have to work at it. For around six years I was writing with just one or two comments a week. It took a long time before people caught on.

In your blog you share your enthusiasm with the reader and cover many different subjects, from Jerusalem Bagels to Bonnat chocolates, made in Voiron, near Grenoble, and filled with Chartreuse liqueur and you reveal the best places to eat and shop in Paris. The photos are enticing but a great deal of the success of your blog must be because of the way you write, which draws the reader in. Have you always loved writing, just as you have always loved cooking?

Not at all. I had a writer who helped me with my first two recipe books and I learnt a lot from him. What I feel is that every recipe is a story and it is the story that makes one person’s recipe for a chocolate cake different from another person’s.

What makes me different I think from other bloggers is that I like to be conversational. I carry that over into my books and My Paris Kitchen, for example, is not just a list of recipes but also the story of my life in Paris.

You are an American living in Paris. Do you think there is still a romance associated with that idea?

People from all over the world are really fascinated by Paris. There are a number of people blogging about it but a lot of them do not stay here long term. There is the romantic side, but there is also the business of getting on and living here and I like writing about that stuff, not just the romance. French people say they like my blog because it is not stereotypical, it is real France.

How long did it take you to really know Paris?

It took me around ten years to feel I was really at home here. First it was more like being a tourist, enjoying buying croissants and drinking coffee in a café.

But really living here is a challenge. It is unlike any other place. So when you have been struggling to get paperwork done and the bureaucrat signs and stamps a paper, you say, yes, I did that, I’m beginning to be French.

I was in a taxi today and the driver was complaining about this and that and I understood what he was talking about and joined in and felt French in that way. However, I want people to know I am American. However integrated you are, you are still an American living in Paris.

Do Americans have a good image in Paris?

Yes, I think so. Vendors always tell me that the Americans are appreciated because they are so polite. We always say sorry and excuse me. And we are naturally happy all the time. We are hard wired to be happy.

As a Brit, I feel it was quite an adventure to cross the Channel to live here. But you have come from much further away and it was a much bigger step to take. So why did you come?

I did it at a point in my life when I had been working in a restaurant for many years and it had become too physically demanding so I wanted a change and I started writing. I have now written eight books. French cooking had always been the basis of my life and in California we have a Mediterranean type climate and use similar ingredients like garlic. So part of coming here was the fantasy of living in Paris and part was the culinary culture.

Did it live up to your expectations?

Yes, because of the accessibility to great ingredients with so many markets and food shops. For example, there are five bakeries a block away from my apartment.

And no, at first, because it was at a period when the food quality had dipped in France and there was a risk that the country was actually in danger of losing its culinary culture. I saw burgers taking over from jambon-beurre baguettes.

In California, where we were influenced by French country cooking you never bought anything without knowing the farmer who grew or produced it.

My restaurant Chez Panisse was at the forefront of getting French and Italian country cooking into the US. San Francisco was particularly special in this way. I knew the people who started making their own chocolate from beans in the bean to bar movement. When I came to Paris it was ‘Where are the farmers?’

Has France lost its cooking culture?

No, the country realised in time that changes had to be made and the “fait maison” label was introduced in restaurants and bakers were only allowed to be called boulangeries if they made their bread on the premises.

Now there are young chefs who are making sure they only use local and seasonal produce. But it is hard to say what French cuisine is now. Young chefs in Paris are doing great things and are influenced by world cooking. There is now a gin distillery in Paris. Globalisation has affected all countries.

Is your style of cooking French?

I would say it is French ingredient inspired cooking. Tonight, for example, I am cooking asparagus with eggs mimosa, with ingredients I was able to buy from the market this morning. For dessert we will have chocolates made by a wonderful chocolate maker I have discovered in the Alps.

I love going to the market. I love being inspired by what I find there. I do not make fancy things. It is home-based cooking, but I like building up the flavours. For example, as we speak my shallots are in a marinade with herbs for the sauce I am making for tonight.

I like vegetables. I know the people in the market now and the advantage of staying in the same place for a long time is that you get to know where you can find anything you might want.

People at home might imagine that a food blogger has a dream kitchen, but it wasn’t like that for you at the beginning. Can you describe your first kitchen in Paris?

It was in a maid’s room on the top floor and it was not built to have a kitchen, so the cooking area was tiny.

There was a fridge and an oven which did not work very well and a tiny work surface. I often had to mix my ice cream in the bedroom or put things out on the window sill.

However, you do not need a lot of stuff to cook well. You need a couple of good saucepans, you do not need fifteen; a good knife; a good chopping board; a big dish for making casseroles, and I think a dishwasher is essential, to keep up with all the washing up. It is not difficult to make good food on a crummy cooker. What you do need is good ingredients.

Your latest book L’Appart is not about cooking but about the trials and tribulations of buying and renovating an apartment in Paris.

I did manage to cook in a tiny kitchen, but after my first years doing that and working hard to get my blog known, I eventually wanted a good kitchen and my own place.

In the book I talk about how difficult it was first to find my apartment, and then how renovating was a huge challenge, and did not go as expected.

I said tu to the builders and made them cakes. I should have called them Monsieur, not Bill.  My partner warned me that was not the way to go about it in France, but I didn’t listen.

I was later told that Americans have a reputation for being gullible and so I paid for not listening to advice from my French friends.

There is a social structure. They killed the King, but the King is not dead. You have to be the boss, the chef – and though I am good at being a chef in the kitchen I found I am not good at being the “chef” directing renovation works. I wrote it to be amusing. It was hard, but that is life.

And now you are in your own apartment, do you feel at home in Paris?

Going through the process of buying and renovating made me understand France better and why I am here.

I feel I belong now I have gone through this.  I love writing and cooking. There is the dream and the romance, but you have to work hard to live here just as anywhere else.

So what makes Paris and France so special for you?

Above all the food culture. The fact that people talk about food and it is important to them. That you ask someone where they come from and they will talk about their regional dishes. If there weren’t so many verbs in the language, France would be erfect!