François Hollande was funny, but he was rubbish 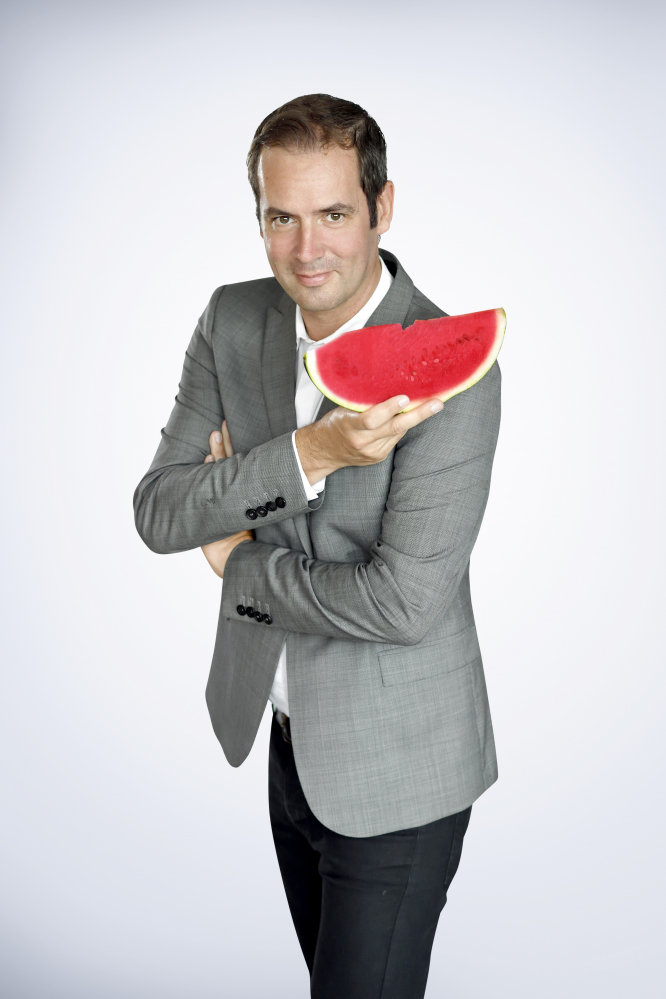 Who said the French don’t do political humour? Tanguy Pastureau shows that – with his quick wit and ability to turn the news of the day into a text which is, quite frankly, funny – yes, they do.

He is known for his appearances on the C8 TV show Les Terriens du Dimanche, and for his daily radio slot at 12.10pm in the Bande Originale programme on France Inter. He has recently turned his talents to the theatre and his one man show Tanguy Pastureau n’est pas célèbre is at the Théâtre du Marais in Paris from September 19.

How did you become a comedian?

Quite by accident. In the early 2000s, I was working for France Bleu, Île-de-France, the capital’s local radio station, actually on the streets of Paris. Every hour for three minutes, my job was to get the real Parisians to speak about themselves, their life, their town, live on air.

But, after about a month or two, I started to have fun with them and get them to say any sort of nonsense, because I hate routine conversations, I am incapable of talking about what the weather is like, and I can’t even imagine being someone like (TV weather presenter) Evelyne Dhéliat.

The radio station manager heard my reports and said that I was rubbish as a journalist but that maybe I had what it took to be a comedian.

So, at their request I started to write sketches and crazy news reviews until I had quite a pile of them. By then I had got the bug and I thought there could be worse jobs in the world than working to make people laugh.

How would you describe your type of comedy?

I have no idea, myself, what I am. I know I like taking the political or social news of the day and making something funny out of it by making comparisons, using metaphors and adding a bit of impertinence and a bit of the absurd.

I want to have and use freedom of speech and freedom to laugh. Not only at politicians, who are always way behind the evolution of society, often by several centuries, but also at ourselves, and myself. The ecological disaster, which we talk about all the time while everyone continues to lead their lives as if nothing is happening, is exasperating, but at the same time, funny.

The British tend to think we are the Kings of Satire, but has satire now found its place in French comedy?

Satire is French. Molière and Montesquieu were both satirists. It has, then, not found its place in France, on the contrary it is at the heart of everything.

It is a secular tradition, even the King’s jester made fun of the people at court, and so too of those in power.

Comedians today have exactly the same role: they are the only ones who have the authority to poke fun at everyone without having to suffer eventual negative comebacks. When you think about it we have an amazing amount of freedom.

What and who makes you laugh?

What makes me laugh the most are the little everyday mishaps, someone who slips in the street, the dogs who start mating under the shocked eyes of their elderly lady owners who have forgotten that Fifi the poodle remains, despite his perfect grooming, an animal with natural urges. All these little slip-ups which kill the artificial perfection we try to role play every day.

Then to talk of professional comedians, I like the use Pierre Desproges (a comedian reputed for off-beat black humour and anti-conformism) made of the French language, and the absurd humour of Monty Python, who are the unsurpassed masters of comedy. In contrast, I hate divisive humour, minorities who make jokes about minorities against minorities. In comedy, you should address everyone. It makes no sense if even humour is exclusive.

Do you think that satire is important in a democracy, so that politicians do not take themselves too seriously?

Of course – but the politicians, in spite of our jokes, continue to take themselves seriously, because the Fifth Republic, which is a constitutional monarchy in disguise, wants that.

President Macron lives at the Elysée, a palace with a room for every day of the year with more gold than Puff Daddy’s or Melania Trump’s bathrooms.

Inevitably, as soon as he steps into the palace, he lives an enhanced life of his own. When he thinks of himself he is on the verge of caressing himself. We can make as many jokes as we like but he, from the top of his ivory tower, will never hear them. Just like the Kings who never heard the satirical songs of the people singing about them just before a revolution.

Should we all laugh more often in our daily lives?

Not necessarily. I am against the idea that laughter is always necessary and that there should be comedy everywhere. François Hollande was funny, but he was rubbish.

I think it is a good thing that there are people who are serious by nature and who don’t want to spend their life laughing. However, the more people want to laugh, the more they will come and see me on stage, and the more money I will make – so you understand, I am rather divided on the question.

How does it make you feel, when you make people laugh?

The satisfaction of a job well done and the feeling that I have taken people out of their daily lives, just by talking, and by distorting things a little. And the pleasure in seeing that my world can please other people and not just me.

How do you work? Is it easy for you to write, or does it take you time to find the right words?

I work alone, in my office at home, and in light of the amount of work I have – radio, television, theatre, and I also have a project to be a fire-eater on the pier at La Rochelle this summer – I cannot allow myself to vegetate for hours in front of my paper.

So I work fast, by instinct, taking what is in my brain at that moment, and I improve it afterwards with a change here and there. Usually, it is pretty fast. I like the punk side of things, not overworked, which leaves space for a slip.

Is 2018 a good year for subjects for comedians?

Yes, because all the different media on the internet means that everyday you can find ridiculous controversy, unthinkable goofs and bizarre news stories. There has never been so much material to draw on, even just the choice itself is vertiginous.

Thirty years ago, comedians had to go to the newspaper stand every day, excitedly buying the newspaper they hoped would give them a good idea for their anecdotes, knowing that some days, there would be nothing.

It must have been much more difficult. Today, it is easy to be a comedian.

Is Macron a good subject?

An excellent subject. His win culture, his desire to get ahead, like a trader on steroids, the fact that he wants to save the planet while making us head into a free market with fewer and fewer controls which will drain all our resources, his total lack of dialogue, because he thinks he is always right…

Everything about him is funny. Over the top, so funny.

Do you prefer television, radio or stand-up?

At the moment, I like being on stage, because it is new for me and so it is a challenge.

I have done radio and television for several years now, so it has become routine. I’m not saying that every morning I go to work like a Chinese miner to his hole in the ground, but it is inevitably more exciting when something is new.

The challenge is to continue to live from these media activities with the fresh amazement of a beginner, the keenness of the amateur – and not to behave like a professional who has succeeded.

Are you happy in your work?

Yes, to the extent that it allows me to live by my writing, my imagination and the world we create when we are children and then do not make the most of later.

To be a comedian is to never grow up. That is to say that the child within you is always there, and it is good to be like that.

You can be Peter Pan, without having to put on green tights, which cling to your buttocks. And when you don’t do any sport, that’s fatal.