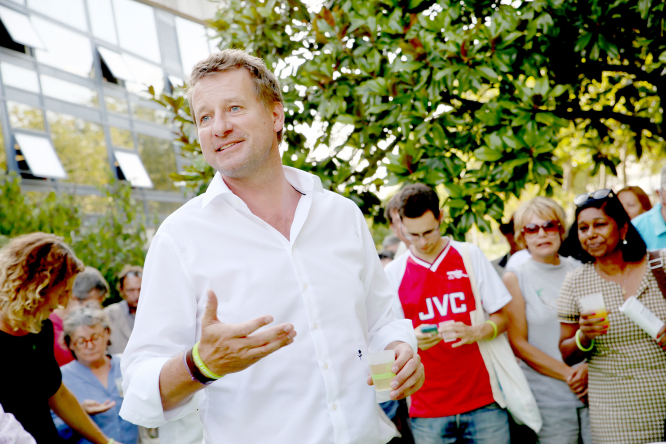 'People need to be engaged with good news, rather than turned off with bad news all the time' says Yannick Jadot
By Samantha David

As an economy student in Paris, Yannick Jadot was an active member of numerous environmental groups then, after university, worked for various foreign NGOs spending several years in Burkina Faso and Bangladesh.

From 2002-2008 he was a gung-ho campaign director at Greenpeace, and hit the headlines when he sailed an inflatable zodiac into the Ile Longue nuclear submarine base, near Brest, to protest against the French nuclear arms programme, which Greenpeace said was illegal under the Non-Proliferation Treaty which France had signed.

“Oh yes, that was mad,” he says with a laugh. “And they took me to court you know, for spying, threatening the interests of the State... as if that was possible, just a few of us wobbling about on an inflatable, with dozens of journalists along!”

He also made headlines when energy giant EDF hacked his computer at Greenpeace to spy on its campaigns (the case went to court in 2011 and some EDF staff were found guilty).

It would be tempting to ask about all his adventures but they could fill a book, so I got to the point...

What, in his opinion, is the biggest single ecological problem threatening the planet at the moment: climate change? pollution? intensive farming? pesticides? single-use plastics?

“Of course they are all linked, but the culmination of them all is climate change, which is the most urgent.

“Tackling air pollution, changing our agricultural systems, banning the use of pesticides... for the good of the environment as well as because of their harmful effect on human health, protecting our biodiversity and the earth’s atmosphere... all of these are important, but climate change is the leading thing and all these other issues have to be resolved in order to deal with it.”

As an MEP, a lot of his energy goes into informing people, raising public awareness and pushing politicians into action. “There are things already in place, like the Paris Climate Agreement, discussions on energy production, public transport, intensive farming. So we have to raise awareness of what’s in place and ensure it is respected.”

The European Parliament voted to cut plastic bag use and the Com­mis­sion is cracking down on single-use plastics with plans for a ban by 2021 on 10 single-use items such as straws, cotton bud sticks and cutlery that make up 70% of marine litter. It also demands states recover 90% of plastic bottles while making producers fund waste management and clean-ups.

“The use of plastic is linked to the use of fossil fuels and the pollution of our bodies. It damages environments including the oceans and the countryside, and in very deprived countries with no structures for rubbish collection it’s catastrophic.

“There are plastic bags everywhere, in the sand, in the trees, and in the earth. You try to plant something and the ground is full of plastic. Beaches, too, are covered in plastic.”

All this needs urgent attention, and all mainstream political parties have environmental policies as it touches on almost every conceivable issue; unemployment, immigration, durable fisheries and agriculture, the fight against genetically modified products, energy production, housing stock renovation, societal questions.

“The trouble is that their action tends to stop where financial interests start but ecologists, from street activists to MEPs, we don’t stop where profit begins, we go all the way.

“That’s our role. To push everyone, to raise awareness and to force governing political parties to make good on their election promises.”

He goes further and wants to see European societies completely restructured. “Take energy transition; we want to transition to using renewable energy sources, produced locally by small local companies rather than by energy giants like EDF.

“The Green Party has a conception of a green society that is very different from the one we have now.”

Which is why he sees Greens as natural partners with left-wingers and socialists. “I’m an ecologist before I’m a socialist, but it’s true they are very close, but even left-wing politicians do anti-environmental things.

“Ecologists are outside the old questions of left and right-wing politics. Nuclear power, intensive agriculture, ecologically damaging waste disposal; all of that was set up by both left and right politicians.”

He concedes the left tends to be more pro-Europe and pro-environment than the right but in France the left is in disarray; fractured, divided and lacking clear leadership.

“Since Hollande betrayed his promises, failed to stand up to globalisation and didn’t help working people, he lost the public’s trust. So now we have to reconstruct the left with the objective of governing, but we can’t just offer the same again. Voters need new hope for the future.”

He says the three preoccupations in Brussels right now are:

• Is the EU aiming to be a mini globalised free-market, even if it results in destroying the environment?

“I am pro-European but do not want the EU to remove regulatory and regulation-based governance in favour of completely liberal free marketeering.”

• How can we make the EU immediately useful to Europeans?

“We have to deal with healthcare, ecological transition, public transport, and energy. We have to create jobs right across the territory, and re-give a sense of Europe.”

“We need a common vision, we need solidarity across the EU bloc. The lack of it was a factor in Brexit, we see the effects at the polls in Italy, in Hungary.

“Across the EU, people are against ‘the other’. This absence of solidarity is a crisis for us all. It’s not simple but we need a communal answer.”

“That exists already, and our role as politicians is to reduce the barriers against it, and give space to that good society. We know we have to change the development model but the new one is already there, we just have to put it at the heart of policy.

“We have to spotlight what is working well rather than just pointing out the disasters. People need to be engaged with good news rather than turned off with bad news all the time.”