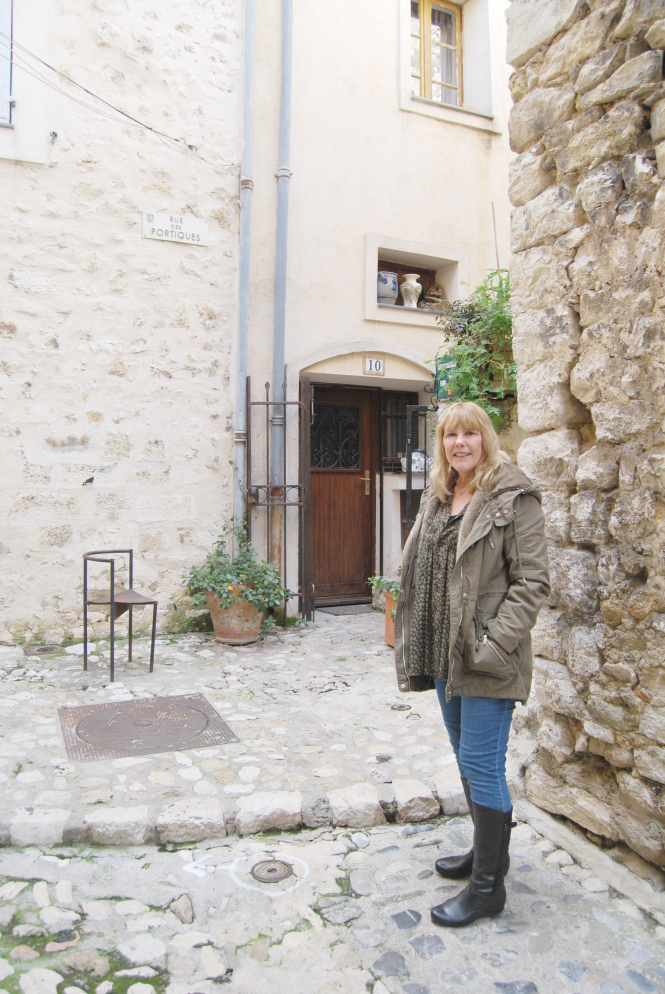 It is a crisp, sun-kissed morning in Vence, above the Riviera, and New Zealander Rosie Richards – better known as Alison Roberts, bestselling author of medical romance (category fiction) novels for publishers Harlequin – is talking romance over a cup of tea.

Not her own love life but her success in France: “I actually sell more books here than any other country in the world,” she says with a broad grin.

“I’m not sure why the French love romantic fiction so much. Maybe France is just the most romantic nation in the world?”

Her success is remarkable. She shifts, as industry experts say, ‘serious units’.

She is writing her 86th book (she writes around five a year) with many translated into 26 languages. “I don’t tend to study royalty statements but I remember noticing the print run of one book was for 60,000 copies.”

Her titles include The Doctor’s Wife for Keeps, A Life-Saving Reunion and The Surrogate’s Unex­pected Mir­acle. One is also in a Japanese Manga version: “You know you’ve made it when you get a Manga book!”

‘Category fiction’ are novels often read in one sitting and Rosie’s ‘niche’ is stories involving paramedics – a field she knows well as she was one (she was also married to a doctor).

It was her writing that, 20 years ago, pushed her to become a paramedic.

“I was writing a book, my fourth or fifth I think, and it had a train crash in it. I attended a research expo and noticed a tent for the ambulance service so I took advantage and asked how they would manage a train crash.

“A very nice guy said to come along for a ride, so I rocked up to the ambulance station, went out for a night shift with the crew and absolutely fell in love with the job.

“It was like I’d found what I was meant to be doing my entire life. So I trained and became a paramedic.

“It’s a job like no other and was the perfect antidote to solitary writing, with full-on people and situations.”

These days ambulances are behind her, so solitary writing takes place every morning (often in bed on her laptop, she confides wryly) in her tranquil top-floor flat in historic Vence, high in the hills behind Nice.

Just 18 months after upping sticks from Auckland, New Zealand – she moved there after the devastating Christchurch earthquakes in 2011 – she is realising, and loving, her long-held vision of a life in France.

“It has always been a dream and the earthquakes made me realise a dream will only stay a dream unless you do something about it.”

A life-long Francophile, she took an interest in the language from a young age. “My mother started teaching me French phrases when I was five. They still stick in my head, even though I would never use them today.”

She studied French in high school, and despite ‘life taking over for a while’, she always had a burning ambition to speak French well. “It’s the most beautiful language in the world.”

Her goal? “I want to be able to open my mouth and not have somebody speak English back to me.”

She has plenty of chance to brush up her skills in Vence, spending as much time as she can with French people, joining a marche nordique club to walk to Col de Vence (one of the Cote d’Azur’s famous passes for cyclists), chatting and picking up phrases.

“I was with two women the other day – they spoke English to me and I spoke French to them and we corrected each other. They are just so kind and keen to help me.”

Her life in Provence is all about getting involved. “I don’t want to be in France watching the French people live: I want to be part of it.”

She takes lessons, reads as much French as she can and listens to podcasts in French. “It’s hard work and frustrating to not be able to say what I want, but I’m getting better. It’s such a long process, especially as you get older, but I am determined.”

Her efforts are paying off – she recently gave an interview with Nice Matin entirely in French.

But it comes after three years’ work, starting with a month’s language immersion course in Villefranche-sur-Mer. One bus trip took in Vence and it was a coup de foudre – love at first sight.

“Walking down these medieval streets, it felt like I had lived here in a previous life.”

Vence, she says, is like a living museum – and she cites Eze and La Colle sur-Loup as other favourite places to wander.

Making a living as a writer is not easy. “When you go into a bookshop, just 15% of the authors whose books you see will make a living from them, and out of that 15%, the vast majority will be romance authors.”

One myth she can at least partially disprove is that only women read it: “Oddly enough, the only fan letters I have got have been from men.”

She is also keen to defend ‘category fiction’ against snobbery. “The people most passionate about how awful it is, are generally people who have never picked one up or read one.”

When it comes to writing technique, happy endings are obligatory and she said: “That is one promise a category romance gives you.

And I like that. That’s the magic – things can get as grim as you want but there’s got to be hope,” she says, before adding, with a glint in her eye: “If you want to read totally miserable endings, read a newspaper or a Booker prize winner.”

The toughest part is to keep the writing fresh with new ideas.

Her time in Villefranche-sur-Mer inspired her to set some of The Baby Who Saved Christmas in nearby millionaire’s playground, Cap Ferrat, and life in Vence is inspiring further ideas.

“I’m working on a project which isn’t a category romance, but a longer book set in Vence.

“I want to capture how I feel about the place.”

Still in the planning stages, this will be a standalone novel, but still a romance. “Because I enjoy them and it’s what I’m good at I suppose, and in a longer book I can do a lot more with other characters.”

She does not give details away but it will be about Scottish girls who inherit a house in Vence. “A lot of the characters will be French but the book will be from my perspective of a foreigner getting used to the culture.

“Any character is an amalgam of people you know. But I would be very careful not to feature people directly; that’s an invasion of people’s lives.”

It is clear she feels at home in Vence. “The thing that captured me first is a sense of peace, which I only found in one other place in the world – the island of Iona in the Hebrides.

“Then there’s the climate, the colours and the sense of history and the language – everything comes together to create something very special.”

New Zealand is a long way if you miss family

Life for a long-distance expatriate in France, such as for New Zealander Rosie Richards, can be challenging. No flying visits home for the weekend and friends and family cannot simply “pop over” for a catch-up.

“It’s daunting. It’s such a long way for visits and it is expensive. That is obviously a downside,” says Ms Richards.

However, she admits that some of the feelings of isolation felt by a lot of expats are tempered because of her choice of work.

“Working as a writer, you isolate yourself anyway – it is a solitary job and I’m okay with that. But I do miss friends and family.”

Some friends have already come over to see her in Vence and her daughter, an artist, visited for a couple of weeks at Christmas. “She is doing a Masters in fine arts, and loves working with stone, so I knew she would love it here. We walked a lot in the old town.

“We are known as a nation of travellers and adventurers,” says Ms Richards about her compatriots’ itchy feet and desire to experience life in other countries. “At home, whenever some major story breaks in the world, you can almost guarantee there’ll be a Kiwi involved somehow, ready to provide their take on it.

“And we punch above our weight in a lot of arenas, if you go on success vs population numbers. Possibly in fiction writing as well as sports.

“It’s hard not to be proud of being a New Zealander.”

France under the long white cloud

There are no exact statistics for the numbers of New Zealanders in France. Their Paris embassy does not keep figures and France’s embassy in Wellington could only say about 220 people had visas.

The Kiwis who live here continue a deep and rich shared history between the countries, best illustrated by the many Kiwi rugby players in France’s Top 14, among the world’s best-paid players.

In New Zealand, too, there is an intriguing Francophile link. The small town of Akaroa – billed as ‘the most French town in New Zealand’ – is in the South Island’s Canterbury region.

In 1838, Le Havre whaler, Jean-François Langlois saw Akaroa as a town to service whaling ships and bought the peninsula for families to set up a French colony. By the time they arrived two years later the Akaroa chiefs had done a deal with the New Zealand governor, who declared sovereignty over the whole of New Zealand.

In spite of this, the arrivistes stayed on, and Akaroa is New Zealand’s only French settlement. The French legacy is seen in its street names and lovely colonial cottages as well as the Festival Français d’Akaroa and shops such as La Boucherie.