Lack of GPs affecting almost all of France 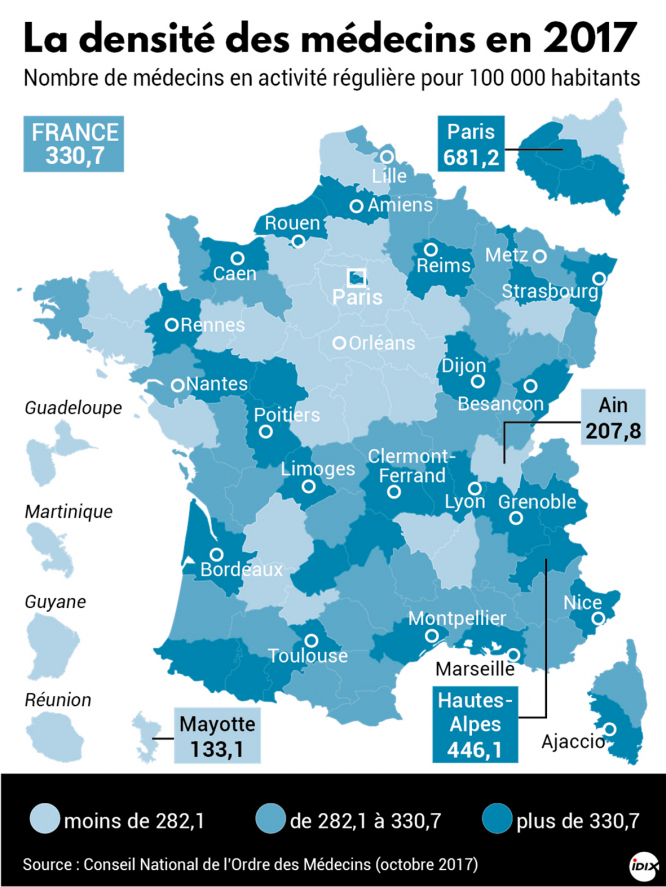 The Ordre des Médecins has also flagged up concerns about declining numbers of GPs and notes a trend in recent years of more doctors choosing salaried posts as opposed to traditional private practice.

The government says it seeks to ‘transform’ the current system – are you impressed?

The government makes a lot of announcements but it’s been in power for eight months and we’ve not seen a lot of action. ‘Desertification’ of private practice doctors is spreading rapidly and we need extremely urgent measures but the government acts as though there’s plenty of time.

It’s frustrating. We asked for changes to medical studies so students in their last three years can have experience of private practice medicine and then be able to set up very quickly afterwards, but there’s been nothing – no experience, no new incentives, no measures to recruit extra placement supervisors to look after the students.

Is it due to students not wanting to work in the more rural and isolated areas?

No, the only place not affected, that has far more doctors than the rest of France, is Nice. All other areas are fragile or becoming fragile – Paris has lost 20% of its GPs in 10 years.

I am in Clamart [in the southwestern suburbs] and in this commune and two neighbouring ones we’ve lost 15 GPs in four years, who have not been replaced. We’re 2km from the 14th and 15th arrondissements – it’s not an underprivileged area.

What is the reason for it?

At the moment 5,000 salaried doctors are retiring each year and students are more tempted to go into salaried posts because of the job security and more family-friendly hours.

At the moment private practice medicine doesn’t allow us to work comfortably, with employees like a secretary or with decent premises, and the health authority caisses [eg. Cpams] have a poor attitude towards us. They see us as delinquents and harass us about things like prescriptions for sick leave or ambulance transport. We are constantly checked on and pressurised.

I don’t understand why the government doesn’t invest massively, not for more pay, but so we can work in better conditions and offer a better welcome to patients, who should not be piling into hospital A&E.

Students prefer to work in a nursing home or a health centre with 35 hours and paid holidays and €5,000/month salary [centres des santé are run on a non-profit-making basis, by bodies like councils, mutuelles, social security caisses or associations]. Some councils think having salaried doctors makes for savings, but to do the work of one private practice doctor it takes two salaried ones.

We have asked for a facilities payment of €50,000 to welcome patients in decent conditions and take on students but the government refuses. It would cost €3bn, but the state pays €35bn to top-up health insurance providers, who have €8bn in administration costs, which is astronomical, as well as a crazy publicity budget. We could recover €3bn from them easily.

We’re disappointed. The real reform that’s needed is to help private practice doctors welcome patients properly and make sure hospitals just do ‘hospital’ work. As it is now demanded that hospitals turn a profit, they avoid doing tasks that will be costly and prefer to do our job. Instead of being complimentary, the system is competitive, but competition is costly to us as we don’t attract students any more.

Are there enough medical students?

Yes, we train enough doctors but only 9% go into private practice medicine in their first year and in the longer-term it’s only 30%; it used to be 60%.

Also the EU has deregulated the sector so a lot of people go to countries like Romania or Portugal to train because they are less selective, and then return and their diploma is recognised. In Romania you can even be taught in French.

The number of doctors per person is above the EU average. The problem is attracting doctors into private practice, because we are going to be faced with a situation where there are fewer and fewer. The government thinks it’s solved the problem by opening up the numerus clausus [this fixes a set number of those students with the best marks who may go on to the second year of medical studies, to avoid having more doctors than required] but the problem of attractiveness of our sector will remain.

We should get rid of the small hospitals, many of which have dubious safety conditions, and hospitals should communicate more with private sector doctors to ensure patients only stay as long as necessary in hospital. Each time a patient sets foot in A&E the hospital gets €250, and this stupidity costs local authorities €3bn a year, so we should change the financing of A&E and ensure people only go to hospital for emergencies or because their GP or specialist sent them.

Why does France make little use of ‘télémedicine’ – technologies enabling consultations and health monitoring at a distance?

The interest of this job is the contact with the patients, so the day that’s replaced by télémedicine I will stop. It has its uses, for example, in islands so people don’t lose a day travelling to have an examination. It could also help in under-populated areas, so a specialist can cover a large area.

People could consult a dermatologist or cardiologist over the internet if the connection is fast enough for good images. It could be good for youth psychiatry, because young people are used to communicating over the internet.

In retirement homes too, where due to the 35-hour week, out of hours there are temporary staff who don’t know the patients, télmedicine could avoid unnecessary weekend hospitalisations.

From time to time I use the internet to send photos to an ophthalmologist or dermatologist for their opinion, and they ask two or three questions… but then there is the problem of payment for the specialist – and there’s also the issue of how internet consultations are paid for, because the caisses don’t seem amenable to investing in equipment or paying for consultations properly.

Are efforts being made to resolve that?

We are negotiating with the caisses, but I don’t think the state will spend a lot on this and it just wants to give the impression of being modern.

Télémedicine will not replace personal contact. Also we are not in Australia with enormous distances, so I think it is going to be a lot of talk for not much result, unless we’re more cynical and imagine for example the government wants to use télémedicine so as to replace doctors by nurses.

They have increased the length of studies of certain nurses and I have the impression they want to recreate 19th century ‘health officers’ [who used to practice medicine without having the title of doctor].

What about people using connected devices to monitor their conditions at home?

It already exists for diabetics and people with devices for their hearts. But we will still need a doctor to interpret the data, so it won’t change a lot, apart from reducing contact with patients.

Has le tiers payant généralisé [plan to offer everyone consultations with no upfront payment] been axed?

No, they’ve replaced généralisé [universal] with généralisable [capable of being made universal], but are moving ahead as if it was universal. Fortunately it’s the French civil service that’s dealing with it so we’ve probably got a few years yet, notably for it to be technically possible.

We already offer tiers payant to those who need it – people on low incomes who have the CMU-C or ACS, people on aide médicale de l‘état [immigrants who have not yet obtained residence rights] or for work accidents, for maternity and for most costly procedures. So, people must stop claiming that money is preventing people obtaining healthcare.

Those who can’t access healthcare are those who don’t go anywhere, such as ATD Quart Monde people [charity for those living in precarious situations], who we have to go and look for to treat – not people that seek us out.

Almost all doctors take cartes vitales and people are reimbursed before the fee leaves their account.

Eleven vaccines are obligatory since January – was that necessary?

The health minister has come in for criticism for making them obligatory, whereas in fact the French were gradually regaining confidence in vaccinations anyway.

The large majority of parents already have their children vaccinated with all of the ones that are now obligatory.

The minister had the sense not to include several where there are doubts over how effective they are.

The main vaccination problem at the moment is measles. Ninety per cent of over-50s are immunised anyway because they had measles in childhood, but generally speaking for those who have had a childhood vaccination the question also arises as to whether we should not be giving them a booster at age 30, 40 or 50 to avoid them getting it in later life, which would be devastating.

But there’s no question that children should have a measles vaccine – any doctor of my age has seen catastrophic cases which caused encephalitis or major lung complications, and the recent epidemic we’ve had, including the death of a young woman, reminds us how important it is.

However we could perhaps have done things differently, as I believe most EU countries do not make vaccination obligatory and we are not the best in terms of the numbers of people vaccinated. That’s partly down to two badly-completed vaccination publicity campaigns that made people doubt their effectiveness and suspect a collusion between the government and the laboratories.

What would you say to reassure parents?

We’ve been vaccinating against most of these illnesses for some time.

It’s true hepatitis B is more recent and is debatable but on balance its benefits clearly outweigh any risk.

The government would benefit from being open about side effects and how infrequently they occur. There will still be a minority of eccentrics who will say vaccines are killing people, but the evidence is vastly in favour of vaccines.