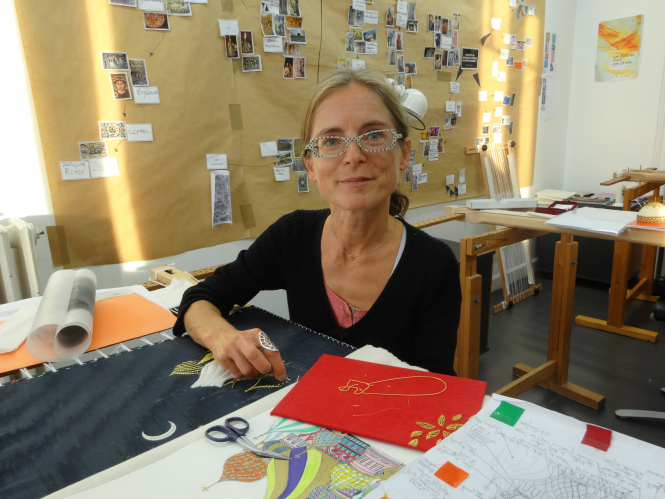 Sylvie Deschamps was 15 years old when she first held golden strings of cannetille.

“I loved its coldness and its glitter,” she says, showing the fine, gold-varnished coil that she’ll cut in pieces to embroider like pearls onto fabric.
“When I held it in my hands, I didn’t want it to stop. I didn’t find this vocation; this vocation found me.”

That vocation is gold embroidery. Thirty years later, Ms Deschamps is France’s premier master of the craft –and the art. She holds the prestigious title Maître d’Art (Master of Art), awarded sparsely by the Ministry of Culture in recognition of those with unparalleled know-how of an uncommon craft and who practice it to an exceptional degree of excellence.

Since receiving the title in 2010, numerous haute couture and luxury goods houses have come knocking at the door of Le Bégonia d’Or, the small workshop she oversees in Rochefort, in Charente-Maritime.
When this visitor came calling, she immediately put away her high-tech magnifying eyewear and hid from sight the prototypes that she and her fellow gold embroiderer, Marlène Rouhaud, were developing for luxury watchmaker Piaget. Exclusivity breeds confidentiality. However, Ms Deschamps and Ms Rouhaud are welcoming and quick to share their passion for their work.

Rochefort, a town of 25,000 in Charente-Maritime best known for its historic naval dockyard founded in 1666, would seem more apt to teach the twisting of hemp into rope to hoist sails than delicate embroidery with cannetille or gold thread.

But in this town once brimming with military uniforms bearing stripes and braids, fine embroidery was part of the fabric of the military economy... before restoration work became a part of the post-military economy.
Rochefort’s Lycée Professionel Gilles Jamain is France’s only vocational high school offering a diploma in gold thread embroidery. Both Ms Deschamps, 45, and Ms Rouhaud, 33, studied there.

Diploma in hand in 1989, Deschamps immediately found work at Etablissements Bouvard et Duviard in Lyon, a workshop specialised in the restoration of religious vestments and other antique fabrics. Her time there deepened her understanding of embroidery’s technical and artistic aspects from as early as the 14th century. When her mentor there retired, Ms Deschamps, still in her early twenties, became the first hand of the workshop, managing orders and doing design work.

In 1995, after six years in Lyon, Ms Deschamps returned to Rochefort and entered a programme to become an assistant professor at the vocational school where she’d once studied. But just two weeks in – and shortly after the creation of the gold embroidery workshop Le Bégonia d’Or by Marie-Hélène César – the workshop’s first director left, and Ms Deschamps was in the right place at the right time to assume the position. The craft that had found her at age 15 now found her at the head of a workshop at 24.

Le Bégonia d’Or (The Gold Begonia) has gold in its name because gold represents the pinnacle of the craft that has long had its place in Rochefort. The begonia, too, is intimately related to Rochefort’s maritime history. An expedition to the Caribbean in 1688 under the patronage of Michel Bégon, intendant of the navy at Rochefort, gave birth to the classification of plants previously unknown to Europeans. One of them would be named begonia, after the expedition’s sponsor. (See the panel on the right.)

Le Bégonia d’Or is a non-profit association that operates like a small business. In addition to original and restoration work, it holds workshops and sells embroidery kits and supplies.
The workshop purchases their precious threads and cannetille from Carlhian, a company in Lyon created in 1870 to serve the silk trade that is now known for its gold and silver thread, braids and trimmings. Carlhian is the only producer in France of this range of gold products, and Le Bégonia d’Or, in addition to using them in its own work, is the only retailer in France of Carlhian’s products.

In its early days, Le Bégonia d’Or was primarily called upon to restore the embroidery on military garments, while there was also work restoring religious vestments and heraldic banners. Then as its reputation grew, so did the diversity of work.

A major turning point came in 2010 when Ms Deschamps received the title Maître d’Art from then Minister of Culture, Frédéric Mitterrand. Since its creation in 1994, only 124 men and women in France have earned the title, which one holds for life.

“It’s the reward of a long career,” says Ms Deschamps. “I needed to show that I was capable of restorations, of contemporary creation and of performing techniques of great difficulty.”
The workshop now counts major brands in haute couture and luxury ready-to-wear among its clients: Chanel, Dior, Versace, Valentino, Ferraud, Saint Laurent, and others.
Ms Deschamps has also performed detail work on bags for Louis Vuitton, necklaces for Cartier, and watches for Piaget. “It’s thanks to the title that luxury houses came knocking at my door,” she says. “I would never have seen them otherwise.”

The title not only brought these high-end clients but in some cases also created the need for gold embroidery. “We became a think-tank for new ideas where a luxury house would say, ‘I need a Master of Art for this project and here’s a gold embroidery Master of Art, so how about integrating some gold thread embroidery into a watch or into a necklace.’ What I love is taking on the challenges that others aren’t able to take.”
She gives as an example a Philippe Starck project that saw her embroidering gold on the leather for a couch at Moscow’s Baccarat restaurant.

She then goes into a back room of the workshop to bring out an exquisite fragrance bottle. In 2013, for the 160th anniversary of the creation of Guerlain’s emblematic Bee Bottle, originally designed for Empress Eugénie, the fragrance house gave carte blanche to nine Maîtres d’Art to create work inspired by the bottle.

While the eight others created one-of-a-kind displays for the bottle, Ms Deschamps dared to decorate the bottle itself, wrapping it as though with a transparent imperial cape embroidered with golden bees. (At the time of this interview she is briefly in possession of the bottle as it is in transit between an exhibition of the work of Maîtres d’Art in Montpellier and its owner who purchased it from Guerlain.) “Having the title opens doors,” she says. “It gives access to fabulous places where art has its rightful place. It gives real visibility and prestigious orders.”

It also carries with it the obligation of taking on a student to whom the title-holder transmits her know-how, her savoir-faire. Ms Deschamps didn’t have to look far for her student. Marlène Rouhaud was already here, being mentored at Le Bégonia d’Or for five years before Ms Deschamps received the title.

Ms Rouhaud was already familiar with sewing and embroidery from an early age through her family, but it was an encounter with Ms Deschamps at the age of 15 that allowed her to fathom the beauty that could be created with gold and silver embroidery. Like Ms Dechamps at that age, Ms Rouhaud also felt drawn to the feel and shine of gold cannetille. While still a teenager, she showed Ms Deschamps some of her work.
“When I saw that I said to myself ‘Wow!’ What she’d done was already perfectly executed, with a regularity in the embroidery that already pleased me,” says Ms Deschamps. “Later on, when she completed a training workshop, I saw that she had rare qualities: she was an excellent technician and she was passionate.” She became a salaried employee in 2005.

There is also a third set of hands, those of Thierry Tarrade. He embroiders as well, though not at the level of his two colleagues, and is largely involved with conducting workshops. He also happens to be Ms Deschamps’ companion in life.

She hesitates when asked if she would be willing to take on another student to the extent that she has with Ms Rouhaud. “I don’t know. It happened so naturally with Marlène because she’s passionate about the work. It would have to be the rare pearl with both the technical aptitude and the passion,” she says. “Every 10 years there might be someone about whom I’d say ‘Oh, she’s got something that the others don’t have.’ Still, even with the rare pearl I don’t feel that I’d have the time.”

Ms Deschamps’ workshop remains a small structure, and despite its reputation there’s competition in this rarefied domain in France. Students graduating from Rochefort’s vocational school programme with a diploma
in gold embroidery – perhaps a dozen per year – may find work in the luxury and restoration fields.

“What will save the workshop in the future is its ability to respond to orders that others aren’t able to treat because they don’t have technical expertise or the innovative techniques to do so. Because that requires real sacrifice. Yet it’s the work we love to do, Marlène and I. We like to be pushed to the extreme of what is most difficult. The challenges change and we have to meet those challenges.”
Asked if she can imagine practising her moveable skills somewhere other than Rochefort, Ms Deschamps says that for now she’s happy to be here and to develop the workshop. “I believe deeply in the potential of this town,” she says. “It has some beautiful tools and need only play its cards right to become better known.”

Rochefort’s historical reputation has long been as a place that one left to sail elsewhere.

Now, though, thanks to the construction of the replica of the 18th-century frigate the Hermione which calls this its home port; thanks to showcases of its maritime history at the Royal Ropeworks and the Maritime Museum; thanks to the presence of Europe’s most important begonia collection, and thanks to the growing reputation of Le Bégonia d’Or and its Master of Art, the pleasant town of Rochefort has become a destination in its own right.

The workshop will be open to the public for demonstrations on European Artistic Crafts Days, March 31 to April 2; www.broderieor.com

Do the twist: knot tyers of Rochefort

Sylvie Deschamps and Marlène Rouhaud may have the most nimble fingers in Rochefort but they are not the only ones tying intricate knots.
At the Corderie Royale, or royal ropeworks, a whole lot of other knot tying is going on as rope is being turned, twisted and braided.
It is part of the historic naval dockyards known as the ‘arsenal’, which in 2016 celebrated the 350th anniversary of its founding during the reign of Louis XIV.
It is the base for the French branch of the International Guild of Knot Tyers, an organisation created in the UK in 1982.

Here, visitors can learn through displays and demonstrations how string made from hemp can be twisted into thick rope for the great ships that sail the world – including the replica 18th century frigate Hermione, which crossed the Atlantic in 2015.

The corderie (www.corderie-royale.com) also includes a workshop where knot tyers (mateloteurs in French) make traditional and contemporary pieces, both utilitarian and decorative, with many for sale.