Not a woman's job? I proved them wrong 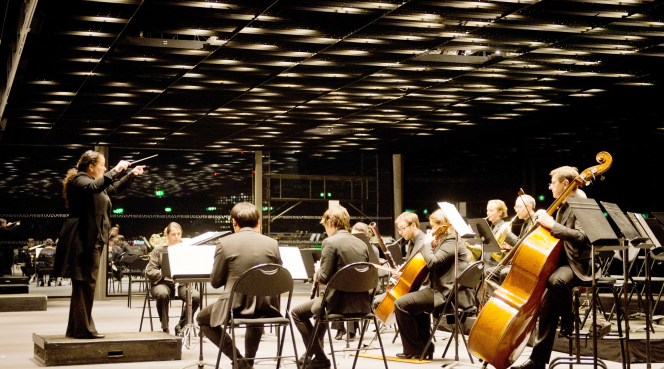 The Divertimento Symphony Orchestra in Paris, conducted by Zahia Ziouani
By Samantha David

Zahia Ziouani is the artistic director and conductor of the Divertimento Symphony Orchestra in Paris. As a woman, that makes her a member of a very select club, but as a young woman (39) of Algerian extraction, that makes her unique.

She is also the director of the Stains School of Music and Dance in Seine-Saint-Denis and in 2008, she received the Chevalier de l’Ordre National du Mérite and in 2014, the Officier de l’Ordre des Arts et des Lettres.

Her work schedule is hectic, so when we caught up with her it was fascinating to hear her views on families, prisoners and how classical music can help job seekers.

Q: Do you remember the moment you fell in love with classical music and realised it would be your life?

Not at all. It was always part of my universe; I’ve listened to it since I was a baby, and went to concerts with my parents, and was always in love with it. So learning an instrument was obvious and as a child I learned classical guitar.

Classical music was part of our family life. (Her twin sister Fettouma Ziouani is a classical cellist.) But I was fascinated by orchestras – which don’t include guitars – so I learned the viola, which meant I could join an orchestra and discover all the instruments.

And then I realised I wanted to conduct. I was very young at the time, but I was lucky to know early what I wanted to do. By the time I was 12 I was conducting the school’s orchestra.

Everyone said it wasn’t a job for a woman, but despite them all I refused to give up. I went to the Sorbonne and got a degree in music, and then trained as a conductor. My teacher and mentor Sergiu Celibidache encouraged me to continue and to conduct.

Is that why you founded your own orchestra so early in your career?

Yes, I realised I would have to create my own orchestra in order to become a conductor because the music world is very masculine, there is no parity. I wanted to develop my musical ideas, my artistic direction, I wanted to decide everything.

So I had to conduct, and to do that I had to create my own opportunities. Many other female conductors have also created their own orchestras because there is a lot of resistance.

Conductors always have the same profile, a white man of a certain age, so they keep reproducing that. It’s the same with musicians, although there are more women players now.

But you feel very strongly that classical music should belong to everyone, in all walks of life?
I want to play in prestigious concert halls, in small venues in deprived areas, even in prisons, so that everyone has access to classical music. I want people to understand that its roots are everywhere, it can spring from Arabic music for example, from jazz, from all kinds of music.

I think highlighting the links makes the music more accessible to a wider public. My repertoire is very broad, and what ties it together is hearing it played by a symphony orchestra.

Did you just say ‘prisons’?

Yes, indeed. I managed to get permission to do this and it is amazing how it changes live. We explain the instruments, what they’re called, what they sound like, their role in the orchestra. We also explain the composers, who they were, what they wrote and why, the various styles of classical music, and then we play.

We go back several times and sometimes the prisoners even play with us. We’ve had excellent results. It’s human and convivial. Our visits allow prisoners to discover new things, to regain their powers of concentration and confidence.

You also do a lot of work with people in deprived suburbs, too?

We try to teach a learning method, a way to find confidence. Even if they don’t become musicians, people acquire skills which propel them forward. Learning music teaches patience, resistance, and persistence. People who practice it develop big ambitions.

So you are building your own, more diverse audience?

It takes time to change things, to make audiences evolve but it is happening slowly and our audiences are becoming more diverse. It’s one reason I like to use lighting effects as well as a very varied programme, so that concerts remain visually interesting and stimulating.

We might start with a full orchestral piece, for example, and then dim the lights and do something much more jazzy, including some improvisation, before moving onto something else with its roots in world music. But in some of the prestigious concert halls, they just don’t have the equipment to do everything I want. Changing things takes time.

Where is a good place to start, if you don’t know much about classical music but would like to find out more?

It’s important to go to concerts, in order to experience the energy that is produced by a live performance. In order to get the most out of it you need to prepare by listening to recordings and reading up a bit about the composer and the music, so you know what you’re going to listen to.

I think everyone can enjoy classical music, and it’s up to us to reach out and explain, we try to deconstruct the idea that it’s only for some kind of elite. Of course, there are some people within classical music who would prefer to keep it for themselves and not share with everyone, as well as members of the public who feel that it’s not for them. The resistance comes from both directions.

And how do you manage to balance your work and home life?

I have a three year-old daughter, and juggling childcare with my professional life isn’t easy, but I manage it. It certainly is possible to be a conductor and a mother.

I just try not to do very long tours or be away too long while she’s still so small but other than that, I think music and motherhood are compatible.