Our new man in Paris 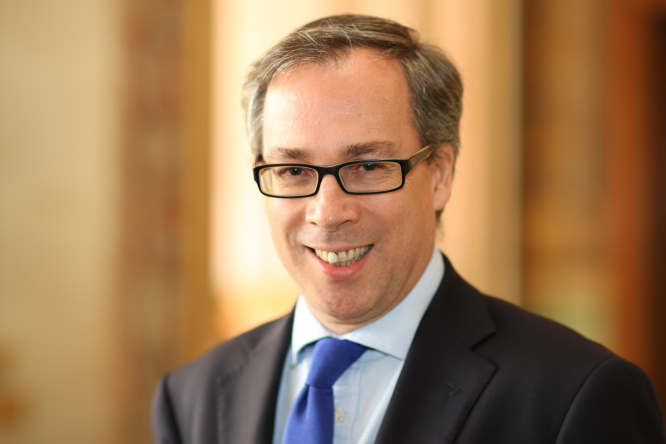 How do you feel about taking up the post and can you
comment on the role you expect to play with regard to Brexit
and how you feel your experience fits you well to the job?

I’m extremely honoured to have been appointed British ambassador to France, and to be taking on the leadership of our embassy team here. This is an important moment in relations between Britain and France. France is not just an ally, but our neighbour and a friend. We share so much – democratic values,
of course; our economic ties; and the fact that millions of our
fellow citizens visit or live in each other’s countries.
Above all we are two countries of similar size, with similar capabilities and we face similar challenges, from growing economic competition to the threat from terrorism. So it makes sense for us to cooperate closely across the board.
Britain will be leaving the European Union – but we will not be leaving Europe. We intend to remain fully engaged and to play a central role in our continent’s future. Understandably, we’re looking to secure an agreement that reflects the kind of mature, cooperative relationship that close friends and allies enjoy. We want a strong Britain as a partner of a strong EU – that’s in all of our interests.
Concerning my experience, I have worked on challenging and sensitive issues throughout my career, including the handover of Hong Kong and the Bosnian peace process, and most recently during six years in Downing Street. This experience will doubtless stand me in good stead in my future role.
What aspects of the job are you especially looking forward to and what areas do you expect to be especially prioritising?

In my first ten days in the job I have been honoured to attend
ceremonies commemorating the end of the offensive on the Somme and the first anniversary of the attack on the Bataclan as well as a very moving service organised by the Royal British Legion at Notre-Dame Cathedral. Those events have reminded me how our countries have stood by each other in times of adversity and how we continue to do so today.
Our security and defence cooperation will of course be a top priority, including the excellent and growing cooperation between our armed forces. So too will protecting the safety and the interests of Brits travelling and living in France – we have a superb and very experienced consular team and I look forward to working with and supporting them in their vital work. I’m also looking forward to meeting the British community here in France.
Promoting our mutual prosperity will be an important priority
– including building on the €50 billion trade links between our two countries, which support so many jobs and livelihoods in both our countries.

I understand you speak fluent French and are married to a Frenchwoman? It sounds like your interest in France is
something that goes back a long way?

France has always played a big part in my life. I did an exchange here when at school and studied French and German at university.
For the last nearly 30 years, my career has brought me to Paris repeatedly – not only while working at No 10 in recent years, but also in my previous positions in Hong Kong, Bosnia and in Brussels, posts in which I have worked closely with French
colleagues. These jobs have also involved a lot of contact with
colleagues here in the British Embassy in Paris.
As for personal links, my wife, Anne, is from Paris and we
were married at the mairie in the 7ième. She and our three small children will be joining me before Christmas and are hugely
looking forward it. I’m already something of an expert on Parisian merry-go-rounds thanks to my kids but I’m looking forward to discovering even more...

3 hours ago
4
Covid-19: What is known about the Indian variants in France

G’day Sheila could have been b’jour Bruce
16 August 2019
More from Interviews
More from Connexion
Get news, views and information from France
Join the newsletter
Subscribe to The Connexion