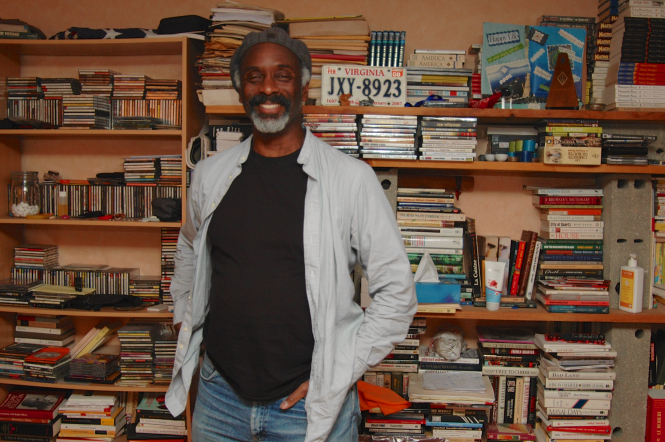 Out of Angoulême’s train station steps a tall, black man with a large backpack, his tidy grey sideburns poking out from under his flatcap. Eddy L. Harris, traveller, writer and expert on the topics of identity and displacement, has just arrived from a trip to Washington DC. How long was he travelling? “Oh….,” he marks a long, weary silence, “for about 50 years!” And then comes the laugh – a deep, gravelly, disarmingly sincere sound.

As we drive to Harris’ house in sleepy Pranzac ('the centre of the universe!'), Harris tells me how he ended up deep in the rural parts of the Charente, of all places. “I was living in Paris, and I decided I needed to go to the country for a year,” he said.

“I wanted to live somewhere with nice weather, with proximity to a town or city. I had already lived in Provence, but that was too crowded and too expensive, so I just followed my nose and started looking for adverts near here.”

He found Pranzac, a village a few kilometres from La Rochefoucauld, and a little further from Angoulême, where he can easily connect to Paris or Bordeaux.

“I had never been here before, but I called one ad and said that I would rent the house, sight unseen, because I was too busy to come and visit.”

The landlords initially refused, wondering what type of strange bird would rent a house without seeing it, but Harris finally convinced them, and the deal was done.

Ten years later, Harris still rents the same house, ready to take off at any moment. However far his travels take him, though, he always lands back here.

“And it’s not just them, it’s the whole clan, the grandkids, the whole village!” The acceptance was immediate: on the very first day Harris arrived, his furniture was being shipped over and his removal truck was blocking the road in front of his house. The village’s mayor was soon introducing himself, telling Harris that he couldn’t leave his truck there. “He goes away,” said Harris, “and then comes back a short while later with a ladder to help unload. Soon people were spilling out of the local café to help, too!”

Sounds like there’s a Peter Mayle-style A Year in Pranzac book in there somewhere. “No!” Harris exclaims. “People keep asking me when I’ll do that, but this is my home, it’s not an adventure. Nothing goes on here! And Peter Mayle’s village in Provence hated him after he published his book. I would never jeopardise my place here.”

That could be avoided by disguising reality in a novel, but Harris isn’t interested in writing fiction anymore. In fact Harris’ first book, recounting his time alone in a canoe on the Mississippi, was a direct result of him not succeeding in getting any of his attempts at fiction published.

“I was in a low place,” he recalled. “I thought: ‘I’ll go and kill myself!’ I didn’t know anything about canoeing, so I figured it was likely that I’d die out there…”

Far from perishing in his little boat, though, Harris came back reborn as a travel writer, with a copy of Mississippi Solo under his arm. He had finally found his place in literature.

The book was published, with great success, and soon publishers were asking for more: “One tracked me down and said, ‘What are you going to write next?’ Without thinking, I replied ‘I’m going to Africa!’ Where it came from, I do not know…”

The result of that particular trip was Native Stranger, a harrowing account of the poverty and corruption that Harris witnessed on his journey throughout the African continent. The book was criticised for its negativity, and Harris lost a lot of his black readership.

Continuing to act on impulse, Harris bought a motorcycle and continued his ancestors’ journey through the US, down to the deep south. Out of that came South of Haunted Dreams, which has been lauded as one of the best books ever written about race in America. “It felt like I was on a particular kind of journey,” Harris said, “so I followed the blacks back up again, to live in Harlem.” There he wrote Still Life in Harlem, which was selected as a New York Times' Notable Book of the Year.

Geographically, the one constant in between all of Harris’ trips was Paris. Harris would return to the French capital again and again. Why? “This I cannot answer,” he said. “It just feels good. It has always felt good.”

Harris first discovered Paris as a young man travelling across Europe on a Eurail pass. “I couldn’t afford hotels,” he said, “so I used the night train to sleep. Paris became the centre of all of these spokes, and I thought ‘why not live here one day?’.”

Paris wasn’t the first home away from home that Harris had settled in. He has lived in a castle in Chinon, a house in Provence, and once made his home in Yorkshire: “The fancy dancy, hoity-toity school I went to in St Louis was an offshoot of one in Ampleforth,” he explained.

“One of my monk friends from back then knew where I could borrow a house to live, so off I went!” Harris has punctuated his life with many of these opportunities – he once lived in London because a fan sent him a letter after reading one of his books, and then ended up lending him his house for two months… “I’m always just looking for a home, like the boll weevil!” Harris burss into that open, deep laugh again.

The TV version of Mississippi Solo was born from a similarly fortuitous encounter. An enthusiastic cameraman wrote Harris a fan letter, and attached a movie he had made about the Mississippi for the BBC. Harris immediately replied and together they decided to film their own collaboration about his canoe trip down the Mississippi river. This time, at almost 60 years old, Harris reprised his journey with a camera instead of a pen.

It isn’t his first documentary. More than a decade ago, Harris filmed a show for the BBC called My Roots in Wales, about his Welsh heritage. That’s right, Harris has Welsh ancestors: “When a friend of mine, who is a TV producer, got married to her actor husband in LA, they didn’t know many people,” he said. “So they decided to invite anyone from around the church who had a Welsh last name. Everyone who showed up was black!”

This prompted Harris to research his own ancestry, and the furthest person he could find back on his family tree was a white, Welsh farmer in Virginia.

“Despite the mythology,” said Harris, “the Welsh were involved in slavery. They think they were all goody two-shoes, but that was the second wave of Welsh immigration to arrive. The first wave were just like the English.”

Despite this heritage, Harris feels well-and-truly American, although that doesn’t stop him feeling like a stranger in his home country: “I’m in France for a reason,” he said. “I like it here, the sensibilities are closer to my own. What is appreciated here is the same as what I appreciate. And if you count all of the time I’ve lived anywhere in my adult life, I’ve spent more time in France than anywhere else.”

His most recent book, Paris en noir et black gives us a closer look at his reflections on this: “In Paris, I am what I can’t be in the country that should be mine. In Paris, I am a writer – I’m black, but I’m a writer (...) In the US, I’m just black.”

In Pranzac, it doesn’t matter what colour he is or what accent he has when he speaks French – he has become one with the village. Harris is deeply involved in anything that goes on  when he is in town. “There’s a casse-croûte at the café? I’m there. Fête de la musique? I’m there. Whenever anything is happening, I’m there, so now, they expect me to be there!”

Finally, we arrive at his front door. Inside Harris’ home, the backpacks and temporary furnishings confirm that he could leave at a moment’s notice. From the window hangs an American flag (“It’s more a joke than anything else… Actually it was the flag draped over my uncle’s coffin”).

Makeshift bookshelves of wooden planks set on cement blocks support a picture of a young Harris and his brother dressed as cowboys in the snow, as well as books of all sorts, including a few titles in French. “There’s a lot of stuff that anchors me here. I can’t bear to dispose of books. But there’s nothing I couldn’t live without. Maybe my cashmere coat… No, my Winston fly rod. I’ve probably never caught a fish on it, but it’s really nice.”

Suddenly, Harris stood up, unfolding his body like a big, friendly giant. “Would you like something to drink?” he asked. “A cup of tea? A whisky? I’m having a whisky.”

The bar is well provisioned: Scottish Ballachine and a bottle of Irish Writer’s Tears rub shoulders with vodka from Iceland. These are not your average supermarket tipple. In fact, they are the only souvenirs Harris allows himself to bring back from his travels. There’s even a bottle of Armagnac with Harris’s name on the label: “There was a moment when I was famous around here,” he shrugged. What about now? “If you want to be a rich and famous writer, you‘ve got to write!” he laughed.

It’s true, Harris leaves long gaps between each of his books: he doesn’t go looking for book topics, instead the topics choose him. “If I had to write a book every time I travelled, I’d have a book published every week!”

As it is, there were almost 10 years between the publications of Still Life in Harlem and Jupiter and Me, an exploration of his relationship with his father.

For now, Harris is giving all of his attention to his TV documentary, and to music: he has been the president of the Musiques Métisses festival in Angoulême for the last three years. The festival, which has been going for 42 years, takes place every year around the time of the French Pentecôte holiday. This year it will be spread over three days, from 2 to 4 June. “It’s a big deal,” Harris said, proudly. “The first time Cesária Évoria played in Europe was at this festival.”

The rest of his time belongs to Pranzac. Harris has travelled, and lived, all over the world; he has seen places that most of us have only dreamed about. And yet, what is his favourite place? “You’re in it right now,” he beamed. “This house, in this village… When I’m not here, all I want to do is get back to it. I love Budapest, and Paris will always be Paris, but this is home. I’m home here.”