I am an artist who creates books for children 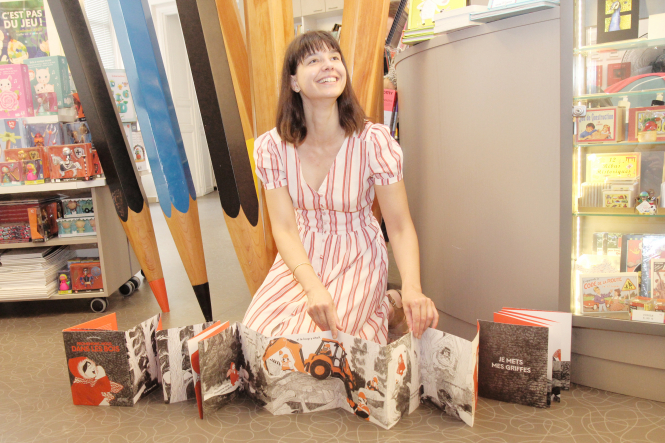 Pauline Kalioujny’s version of the perennial classic children’s story, Promenons Nous Dans Les Bois draws heavily on the influences of stories she heard from her Ukrainian father
By Jane Hanks

Pauline Kalioujny writes and illustrates children’s books. She has won two awards in 2018 for her book Promenons Nous Dans Les Bois – the Prix Pitchou at the Fête du Livre de Jeunesse at Saint-Paul-Trois-Châteaux, Drôme, and the Grand Prix de l’Illustration awarded at the Museum of Children’s Illustrations at Moulins, Alliers.

She is an established author/illustrator and publishes books regularly. Baba Yaga came out in October, and she has another book due for release for the Spring.

However, as she explained, it is a long road from loving to draw as a child to having a book published with your name on the cover.

What attracted you to writing and illustrating?

All children love drawing and being imaginative but most stop when they are older. Artists like me, decide they will not stop being like that. I grew up in a family where my mother and grandmother were both interested in children’s literature and we had a house full of books.

I didn’t want to create books when I was young. As a teenager I wanted to be a painter, but I didn’t get a place at Les Beaux Arts and I was devastated. Instead, I went to the Ecole Nationale Supérieure des Arts Décoratifs in Paris.

At first I wasn’t keen, but I then found it interesting to learn all sorts of different methods, such as graphic arts, photography and video and to learn how to create an image which will be shared.

The wonderful thing about creating a children’s book is that it will be enjoyed all round the country by adults and children.

You write as well as draw and paint, so how do you like to describe yourself?

I do not like the term illustrator because it is not just about drawing. I prefer to be called an artist who creates books for children. I like to create an artistic adventure from words and images.

It gives a great freedom of expression and creativity. I think our work is often undervalued and that the work we do is an art form.

I also think it has an important role, as surrounding children with beautiful books is vital to their development and children should have access to art just as adults do. Art helps you understand the world around you.

How do you go about creating a book?

It takes a very long time. I have masses of ideas, all the time, and they develop slowly into what may or may not eventually become a complete book. I have a sketch book and little by little a character might emerge. Some ideas have to be discarded along the way and others might suddenly grow when I see or hear something which adds to it, or observe a child who acts in the way I think my character would act. It is a very long process.

For example, I am obsessed by flowers, and the way they are constructed and I draw them all the time.

For several years, I have wanted to include them as a theme for a book, and now I have eventually come up with an idea that a publisher has accepted, about a young person who goes into a garden and is confronted by the different characters of the flowers and what they represent.

Now I am doing the illustrations and it should come out in April.

Doing the drawings is really the last step, and, because I have years of practice now, it is the easiest and quickest part, though it may still take some months. However the birth of the book has begun!

What are your inspirations?

I like to explore the link between man and nature. I think ecological issues are very important and in Promenons Nous Dans Les Bois the wolf is not the big bad enemy as it is in this classic French song, but comes to the aid of the characters in the book and at the end the little girl and the wolf are merged in the same image.

I do not want them just to be for children, but also for the adults who are reading them to their children so that they work on different levels.

I am also definitely influenced by the fact that my father was Ukrainian and my mother was French.

I was brought up with the fabulous illustrations from Russian books in the thirties and my characters are often pictured in the winter, wrapped up snugly in hoods and soft scarves. The colours I use are often red, black and white.

It was just not possible for me to remain indifferent to the legends and the songs of my paternal background. However, I did not go to Russia until I was grown-up, but then it made a lot of things fall into place.

When you grow up with two cultures in one country, you often do not understand why you don’t quite fit in, until you visit that other country and recognise things in it that are in you, and that are not in the country you grew up in.

It can be hard growing up like that, but in the end you appreciate it for the richness it adds to your life.

Is France a good place for children’s books?

It is one of the best places in the world for illustrated children’s books.

There are several publishers and they are very popular. I know Italians who come to work in France because this culture just does not exist in Italy. Why it should be so strong in France, I just do not know.

Can you describe a working day?

Today, I am lucky enough to have enough work to concentrate just on my books. For a long time I had to do other jobs to make ends meet. But now I live above my workshop and go into it in the morning. It is a bit like being a craftsperson. I have all the tools of my trade around me and I get to work. I draw and paint.

I write and there is a lot of administrative work to do as well; drawing up quotes, answering emails and so on. It is solitary and you have to be disciplined as there is nobody with you to encourage you. Being in my workshop is like being in my brain and so I do also need to go out and have a break.

I meet with my editor and my art advisor and I like to work with them in a team. Sometimes I go for a drink in a café for a change of scene and I also like to go to exhibitions and have a rich cultural life I can draw on to add to my books. It is great to live in Paris, to have all that around me. I am often invited to schools and to book fairs so my week in the workshop may well be broken up by a trip.

What is it like when you see your work published?

It gives me a feeling of great joy.

It is a huge struggle to get to that point, but it is worth it. I am happy to be doing what I do. When children ask me questions about the characters in the book and I feel they have entered into the universe I have created, I forget how difficult it all was and it is pure magic.