The life of a soldier: boredom, exhaustion and terror 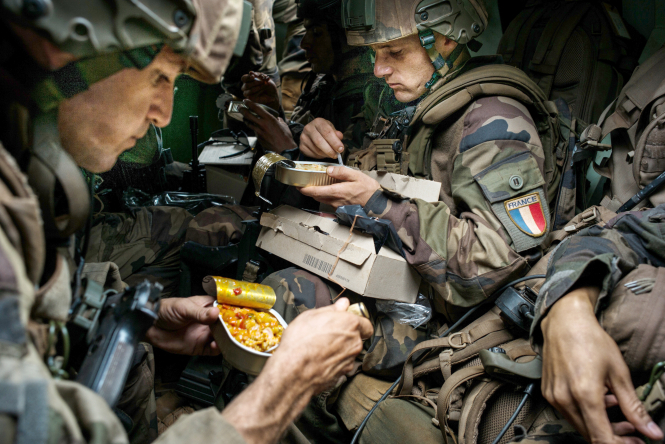 In summer 2012, aged 21, Edouard Elias went to Syria. It is the kind of decision that can see a name going on file with anti-terrorist officials but for Mr Elias it gained him a name as a photographer willing to take the risks to cover a war zone and the know-how to bring home telling images.

The alternative, he says, would have been to do his final collège stage in a photo ID shop in France.

As he tells it, meeting photojournalist Luca Catalano Gon­zaga, founder of Witness Image, along with the inspiration of various books and documentaries, made him “eager to watch history in progress”.

He went to Syria without a commission but within months of his return to France his first photo reports were appearing in major publications.

On his website Mr Elias describes the ease with which he crosses borders. “My childhood allowed me to acquire the faculty of movement, not limiting myself to the borders of my village or the cities of my region.”

Nevertheless, a year after that first trip to Syria, the dangers took a personal turn when he and three other journalists were stopped by armed men and taken hostage. They were held for 10 months, until April 2014, when a negotiated release brought the four men back to France.

“It’s the risk we decided to take,” Mr Elias said on his return, describing himself as frightened but not panicked when the ordeal began.

In public he refused to linger on his personal ordeal. In interviews he spoke of disliking being the centre of a group or of being the topic itself. He would rather be on the edges, observing, looking for the subject rather than being the subject.

He was eager to return, perhaps not immediately to Syria, but to another war zone. That summer the French army gave permission to spend several weeks embedded with the Foreign Legion in Central African Republic.

“There was a moment of hesitation when military headquarters wondered if this was going to be positive or negative [as a photo report],” he recently explained on the occasion of the exhibition Dans la Peau d’Un Soldat at the Musée de l’Armée in Paris.

“I was showing something that shouldn’t be shown, meaning doubt, fatigue, the difficult conditions in which French soldiers evolve.

“That’s when I realised that maybe I was hitting the right chord, that it’s in that vagueness that we reach something important, where we can pierce the intimacy of these soldiers that we don’t generally see in other reports.

“I went as an independent photographer, without a magazine commissioning the photos. I proposed the subject [to publications] beforehand but it didn’t interest anyone. So I went hoping to publish later, which happened with [publication in] L’Obs.”

Subsequently, the Musée de l’Armée contacted him, interested in acquiring some of this work for their archives.

One of his images, of a legionnaire shaving his head, is on the poster of the ‘Life of a Soldier’ exhibition.

The exhibition also presents work by Philippe de Poulpiquet. At 45, he has photographed war zones in Afghan­is­tan, Middle East, and Africa but his exhibition photos, however, were not taken on foreign soil but in France. His work looks at the consequences of war back home: the healing of the wounded and the mourning of the dead.

An example of Philippe de Poulpiquet’s photos, showing the personal effects of an officer killed in Afghanistan

After starting as a freelancer in 1996, Mr Poulpiquet has worked since 2000 with Le Parisien/Aujourd’hui en France and made his first foray into war photography that year when Le Parisien sent him to cover soldiers involved in conflict in the Ivory Coast. As a freelancer he had taken and sold photographs in Africa before, although not in war zones, so when the opportunity came up he wanted to go.

“There’s a bit of fear at first,” he said. “But, little by little, it goes away or we learn to live with it.”

After that first war report, he took a training course offered by the French army for civilians such as journalists authorised to enter a war zone. The course teaches dos and don’ts of being embedded with troops, understanding the nature of various arms, and how to survive in a mine field.

Over the years he has found himself under mortar bombardment and sniper fire and, although not injured himself, knows several colleagues who have been wounded or killed.

As his knowledge of international conflicts and of French soldiers taking part in them intensified, so did his desire to carry out a more in-depth study than possible on assignments that lasted between seven and 10 days.

In 2010, while continuing to work for Le Parisien, he embarked on a project to examine the human consequences in France of the country’s role with the International Sec­urity Assistance Force in Afghanistan.

For three years he followed 13 individuals, some wounded physically, some mentally, some in mourning.

The result was the book Pour la France (For France). Published in 2013 as France pulled out of Afghan­istan following a 10-year intervention for which the country mourns 89 French dead and about 700 wounded, it was particularly meaningful in its representation of the aftermath of war and of service to the nation.

As with Mr Elias, the Musée de l’Armée contacted him to buy images from that project for the archives, a collection of 60,000 phototypes dating back to a Daguerréotype of 1845.

“To have one’s photographs among the archives of the Musée is somewhat the culmination of our work, because we take photographs so that the images live on,” says Mr Poulpiquet. Beyond the news cycle of a daily, weekly, or monthly publication, he says, “they may not reveal their true value for 10, 20, 30 years, even longer.”

The Life of a Soldier exhibition ends with a section about wounded soldiers, medical care and the mourning of war dead. It includes Mr Poulpiquet’s photograph of a war widow looking at the contents of a drawer in which she keeps precious objects belonging to her late husband, who was killed in Afghanistan.

Beside it, a display presents the actual objects of that drawer, while nearby those objects are echoed in another display presenting items found in the grave of a Roman soldier who died 1,800 years earlier.

There are also images from Mr Poulpiquet’s current project, begun last September, on behalf of the Musée de l’Armée, to photograph life inside the Institution Nationale des Invalides.

An in-patient, out-patient, research and long-term housing facility for wounded soldiers and disabled veterans, the hospital was founded by Louis XIV in 1670 but continues its mission of serving war wounded, a status that now also includes those injured in terrorist attacks.

Running until January 28 at the Musée de l’Armée, this exhibition examines not combat, strategy or arms but that which takes up most of a soldier’s time: waiting, resting, eating, washing, and preparing for missions... a time of doubt, healing, even mourning.