The man who lived with wolves for three years 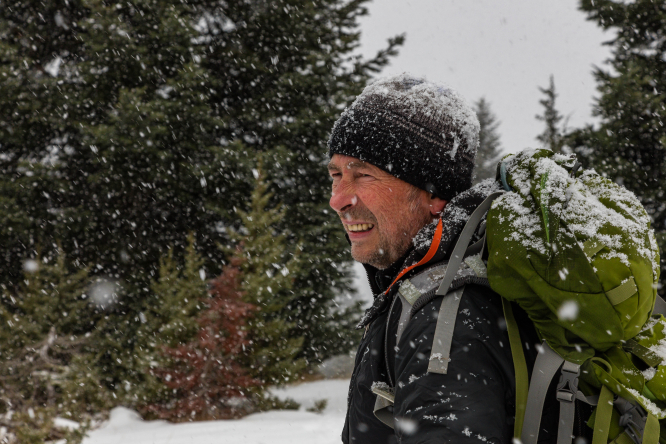 The DVD of a film showing the first footage of native wolves living in the wild in France is to be released at the end of August.

It was made by a man who spent three years patiently waiting to do so in a secret valley in the heart of the Alps.

He made a film for the cinema and has written a book about his experiences, called La Vallée des Loups, which charts his extraordinary adventure and the emotions he felt when he first came face to face with a wolf.

Jean-Michel Bertrand grew up in the Alps but his career as a producer of documentaries took him to many remote corners of the world.

But he was always happiest back home and began to wonder whether wolves might be living in a valley he knew that was only accessible on foot and rich in wildlife.

He tried to get backing for the project from Paris producers but no-one was prepared to fund a film when the hero, the wolf, might not even exist. So he decided to go it alone.

There followed three years of trekking, setting up static cameras, looking for tracks in the mud and the snow and sitting in his hide, camera at the ready.

He was there in all weathers, wind, rain, blizzards, cold, and heat. His epic filming schedule started in March 2013 and he saw his first wolf that June.

After that he had to wait a year for his next sighting. He was eventually rewarded by a daily showing of six wolf cubs playing on the slopes opposite his hide.

He told Connexion why he didn’t give up: “Nearly all footage of European wolves we see on the television are of those in captivity or trained by man.

“I was determined to film wild wolves in their natural habitat and show that nature won’t reveal its secrets easily and that a huge personal investment is required if you want to get results.”

He describes the first time he saw a wolf: “It was a big male. It was a huge shock. It stayed just five seconds and left like a cat. It was incredible.”

The next year, he found traces in the snow and caught some images on a static camera but though he spent hours and days in the vicinity he saw no wolves himself: “Sometimes it was very frustrating. I doubted myself. Maybe somebody else would have done better. But I had plenty of time to reflect on my own life and observe nature around me.

“It humbles you. We should learn from nature. There is harmony and balance compared to the chaos generated by humans.”

In May, one of his static cameras showed a female wolf.

He lugged all his film equipment to the site and camped. The next morning a wolf came towards him: “It was an incredible emotion. The pictures I took suffered because I was trembling so much with excitement. It was like a dream, extraordinary.

“When the wolf looked at me and then urinated where I had done so, it was a moment of extreme privilege.”

On the following days he was able to film the wolves.

There were five adults. He believes they accepted him because he followed the same routine every day. He only walked in the day, he always slept in the same place and they came to understand that he was not dangerous.

He said that he filmed them for a month and they looked at him, they knew he was there.

During the winter he saw a solitary wolf – but throughout the spring and well into the summer he began to lose hope again.

Then, in August, he had his reward. He was able to watch the wolves with six cubs play on the slope opposite his hide for almost a month.

In mid-September he took the difficult decision to leave them alone. He knew he must not let them get too used to the presence of humans for their own safety.

He has been back once since then: “I went back in the winter and I found traces in the snow. It made me happy to know that they are still there.”

Jean-Michel Bertrand is convinced that wolves are not dangerous to man and that we can live in harmony with them: “I was never frightened of being close to the wolves.

“The big bad wolf is just a myth that has been told for so long that it has become part of our culture. A wolf might attack a dog but never a human.

“I have filmed in Mongolia where there are lots of wolves but the local people have learnt to live with them and aren’t frightened.

“I think wolves should be allowed to live in nature. If I have a message to give it is to say that coming face to face with the natural world is a huge privilege.

“Man is very arrogant and thinks he can control everything but nature is bigger than humans and we can learn answers to our questions about life in the wild.

A recent authoritative report suggests that wolves are beginning to lose their fear of man in France and could attack not just animals but people too.

The study was carried out by the French National Institute for Agriculture Research, Inra together with the Centre for Studies and Pastoral Activities in the Mediterranean Alps, Cerpam, and is based on 22 in-depth interviews with farmers, hunters and other residents of the village of Seyne-les-Alpes, in the Alpes-de-Haute-Provence, where a teenager claimed to have been under threat of attack by wolves near to his house in a well-reported event in 2015.

Though the area is not identified as a zone where there is a permanent wolf pack, 14 adults said they had seen wolves in the area, suggesting that there is a new pack there.

Several reported seeing a large male close up which did not seem frightened.

Farmers have said that cows have changed their behaviour and seem fearful and some herds have escaped from their fields and fled several kilometres for no apparent reason.

The interviews with the 16- year-old, his brother and father convinced the researchers that a wolf had tried to attack him.

The mayor of the commune told the study he felt so many people were reporting sightings they were becoming banal and he felt there was a danger from wolves in his commune.

It adds fuel to the growing debate over the extent to which the population, of what is at present a protected species, should be controlled.

Latest government figures for 2015/2016 show there were an estimated 282 wolves in France last winter.

The preliminary report for the summer 2016 does not give the number of wolves but says there has been an increase in the number of packs from 35 in the winter 2015/2016 to 41 last summer. Numbers have grown since the first few came over the Alps from Italy in 1992.

There had been none in the country up until then since the 1930s. They are concentrated mainly in the southern Alps, but also in the Prealps, the Provençal hinterland, the Massif Central, the Pyrénées, the Vosges and to the East of the Paris basin.

The Connexion reported recently that the presence of wolves had been confirmed in the area of the Millau Bridge after tests by ministry scientists said they were responsible for at least one of seven attacks on sheep in southern Aveyron, France’s largest sheep-breeding area. Wolves were blamed for 9,000 farmed animal deaths, mostly sheep, in 2015.

Permission has been given for some wolves to be shot where they are seen as a threat to farm animals and 36 were killed from July 2015 to June 2016. Forty more will be killed by June 2018.

At present the government’s position is that the wolf population is still vulnerable from the same threats that led to its extinction in the 20th century – poaching plus danger from accidents on the road.
However, while it is protected it will be able to regain its original territory.

The government summary concludes: “The future of the population depends on the capacity of French society to live with an animal which is symbolic and upsets farming.”