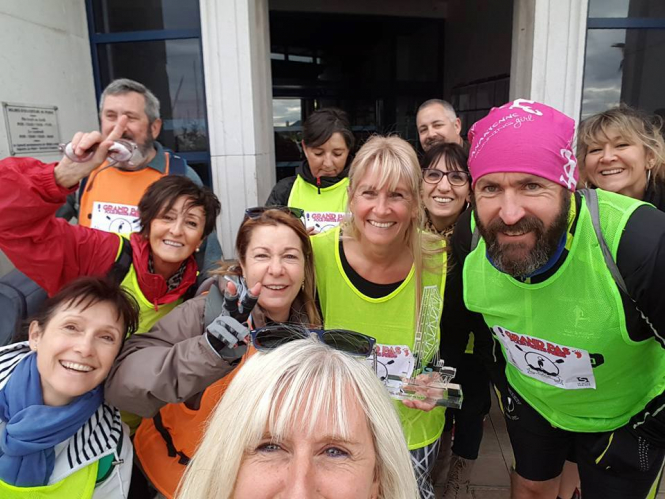 She became involved in charity work after losing her left leg to a staphylococcus infection in 2005. “Being confined to bed for 13 months was devastating,” said Valérie, 53, from La Seyne-sur-Mer in Var.

“I couldn’t stand it. So as soon as things improved, I asked to put my treatment on hold and focus on rehabilitating through sports.”
But she also realised it must be very hard for children stuck in hospital with no sport – she had been a sporty child herself: “I was born in Toulon but grew up in South Africa and played a lot of sport there.”

“I was so tired of doctors and hospital visits and not being active anymore, so I can empathise with the children.”
She tried wheelchair basketball, tennis, CrossFit and paddling and saw big improvements. Paddling was especially useful as it helped balance and worked out her entire body.

Now a keen paddle-boarder, she entered a 220km event in the Netherlands and was its first competitor with reduced mobility – it inspired others to compete the next year, when she completed the tough course.

“I did not think it would have such a big impact, but it appears I opened the door for other amputees to explore more sports opportunities.
“Seeing them grab the courage to compete feels like the biggest victory.”

Her experiences convinced her to help children and the active mother-of-three organised a charity walk earlier this year and a concert at La Seyne, raising €2,600 for children in Toulon’s Hôpital Sainte-Musse.

Valérie said: “I want to improve their time in hospital and help them get better. We asked the hospital to list things the children needed and we are spending the money in the best way possible.”

In the walk she went 62km from La Seyne to Marseille, with about 17km on her prosthetic leg and the rest on crutches. It took two days.
“At first, I wanted to do it by myself, but friends and family insisted on accompanying me for safety. I thought “What if they slow me down?” but now I am glad we did it together.”

Friends and supporters did the walk with her while disability transport group Ulysse transported people of reduced mobility and provided vans full of supplies donated by the local rugby club and supermarkets.

Now Valérie has founded two associations – one for children, the other to encourage other amputees into sport.
The first, Valérie Jusqu’au Bout, Plus que Jamais Debout, (tinyurl.com/Cxn-Valerie) is for donations for her children’s work. Association Ren­ais­sance (donate at tinyurl.com/Cxn-Valerie2) aims to host sports events where competitors can borrow prosthetics to take part.

She said: “It is a shame only very few people with a disability can try sport. Prosthetics can cost up to €45,000 – literally an arm and a leg – and expenses are not reimbursed, so regaining the ability to move comes at a huge personal cost.”

“I hope to inspire people with a handicap to not lose hope. Life is good, even if you are missing a limb or two.”