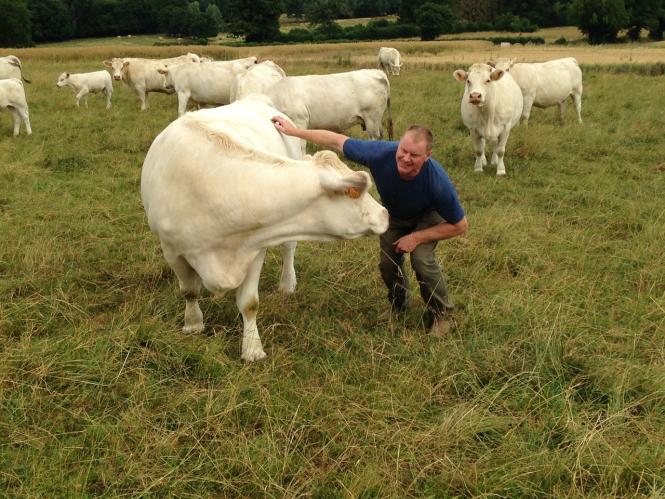 Robert Rogers farms 250 acres of land in Burgundy, including 50 acres of cereal and 77 Charolais beef cattle, but he is now trying to sell up.

The 58-year-old has farmed from the age of 16 and says it is a tough life, made worse by “constant farmer bashing” from the public and the press.

“Despite having the highest number of calves reared per cow in my department [Nièvre], I have been receiving social security payments for three years for the first time in my career, even though I work 60 hours a week.

“On top of it being so hard to make a living, farmers now seem to be blamed for every­thing.

“People have never had such long and healthy lives but hold such a low opinion of the people who feed them.

“It seems to be the fashion to say environmental problems are the farmers’ fault. There are less cattle on the planet now than when I started farming but a billion more vehicles on the roads – and we are told eating beef is causing climate change!

“Farmers are strictly regulated as to what they can and cannot do regarding the environment.

“A European directive is in place to stop the destruction of pasture because of its varied species of plants, insects and wildlife compared to monoculture intensive cropping. I don’t like working with chemical pesticides and they are expensive but without them the result is poor quality crops due to fungus and insects, and low yields due to weeds.

“Why should organic cattle have to suffer tick and parasite infestations to qualify as organic? I do not want to eat infested animals or plants.

“An article in the farming press recently stated that although there has been a rise in cancer over the years, this is not found on the farms where the farmers are using the pesticides. In particular, the vegan lobby seems well supported and to be getting their message across, but they do not give the whole story.

“The price of food eaten by vegans and vegetarians is subsidised by livestock farmers, who buy surplus from vegetable crops to feed to animals.

“Sugar beet is one example: 33million tonnes are grown in France, of which only 17% is turned into sugar.

“The beet is sold to sugar manufacturers for €30 a tonne. Waste pulp is then cooked and dried and sold to farmers for €165 a tonne. I also buy rape and sunflower leftovers after they have been pressed for oil.

“Sixty per cent of the plants used to make vegetable oil spread is sold for cattle. Livestock farmers also buy citrus pulp from fruit juice, soya bean pulp from soya milk, and barley residue after the malt has been extracted for whisky and beer. The list is long.

“The vegan takes the best and the rest would have to be dumped if it was not sold to livestock farmers. What would the price be if cattle didn’t eat what the vegan won’t?

“Where I live, a great deal of the land is unsuitable for market gardening and even for cereals. It is hilly, clay-based and stony.

“We maximise land use by rearing cattle, which in turn produce fertiliser. My cattle produce 500 tonnes of manure a year which is half my fertiliser needs. Crop farmers with no livestock are wholly reliant on artificial fertilisers to maintain fertility.

“I don’t see why people cannot have a varied diet, with meat, and not an extreme vegan diet.

“I am surprised that the public seem more disconnected from the land in France than the UK. There are few agricultural shows and they tend to be very big and mainly for business.

“You see farms and farmers far more on British TV, like programmes where you can see lambs being born. I hope people will reconnect with farming and realise the vital role herbivore farm animals play in our eco-system.”