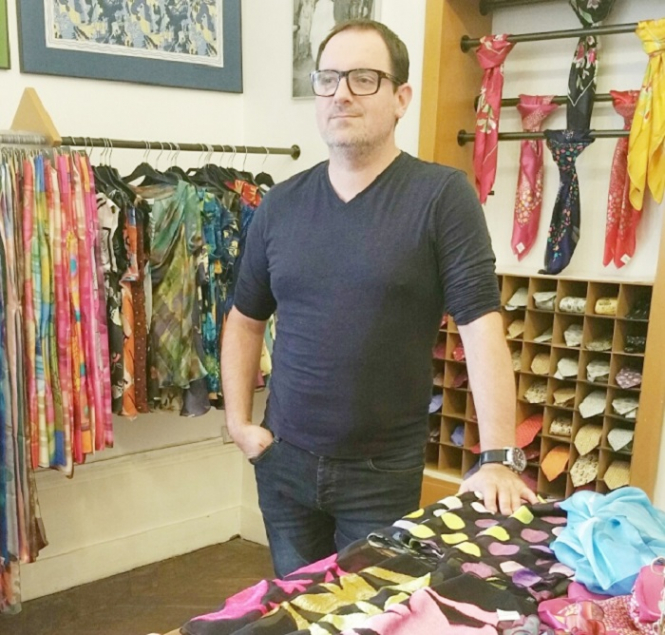 Cyril Genet and some of his silk creation
By Jane Hanks

Lyon was once the silk capital of Europe and in the mid-19th century, three quarters of local industry was related to creating material from silk. Now, there are only a few weaving manufacturers left and just two workshops which transform and decorate the basic, woven, white silk material.

Cyril Genet is the descendant of a local silk decorating family and he explained the ancient techniques he practices in L’Atelier de Soierie, which is open for the public to visit.

What do you produce at the Atelier de Soierie?

Our family business started in 1890 and is dedicated to the printing and colouring of silk, the last step in the long silk process. We mainly produce scarves, shawls and ties and specialise in the reproduction of art for museums and art foundations around the world.

We have more than 100,000 designs which represent all the artistic periods from classic to contemporary, from Monet to Picasso.

We have been silk colourists in my family on my father’s side since my great, great grandfather and we are one of the last workshops in France to carry out silkscreen painting by hand.

Why did Lyon become the centre of the silk trade in France?

It was mainly down to François 1er (1494-1547) who rather liked Lyon and gave the town sole rights to receive raw silk thread as it arrived in the country from the Far East, firstly via the Silk Road.

At one time more than 50% of the city’s workforce was in the industry. It was important up to the 20th century but declined with the introduction of synthetic materials.

Did the silk always come from the Far East?

Silk was also produced in France, from the 16th century onwards and there were silk worm farms in Provence, Ardèche and the Cévennes up to just after the First World War.

But they never managed to produce enough silk for the country and farms were often destroyed by disease and, of course, you need enough mulberry trees.

These are not native to France and were brought into the country by early botanists.  You also need the right climate which should never be too cold and a particular altitude, so it never really succeeded. Now the big three countries producing silk thread are China, India and Brazil.

What are the techniques you use to colour and decorate silk?

There are three. The first is sérigraphie, which was developed in Lyon in the 1920’s and is also called printing à la Lyonnaise. It is called silk-screen printing in English, which I think is due to the fact that the material stretched across the wooden frame was originally silk, rather than because it was used first on silk.

The method consists of layering up the image colour by colour squeezing the ink through the screen except in the areas made impermeable by a blocking stencil. There is a great deal of preparation in creating the stencils and also the colours.

We receive the basic pigments and then mix them to get the shades we want. We must make a stencil for each colour and usually we use around 10 to 15. I think the most we have ever used here is 22.

Once all that is in place it takes about two hours to make each scarf, with a resting time of seven to eight minutes as each colour dries. Sometimes that can be up to 30 minutes if the weather is humid.

It must be very difficult to get each screen with its stencil in exactly the right place.

We have special tables with wedges to position each screen which helps. But it is a very meticulous process. I think in screen printing the most difficult thing is to get the colours right. It is a very specific technique which you have to learn and master and this is what makes any craft so interesting.

There is a lot of satisfaction in creating a screen print as little by little an image appears from the colours you apply.

What is the second process?

This creates the most luxurious and most expensive material which is usually used for shawls and drapes rather than the smaller squares we screen print for scarves. It, too was invented in Lyon at the end of the 19th century and is applied to an exclusive fabric called refined velvet or silk velvet, which is only woven in our city.

We create patterns or take patterns from the many designs in our archives and then weave silk velvet using a local weaving company.

They send us the woven pieces in black and white: black for the silk background and white for the velvet raised patterns. We then choose the colours and paint them with liquid dies using paintbrushes or cotton buds.

This kind of material is often sought after by big Haute Couture fashion houses. It creates a luxury article; the cheapest shawls we sell cost €130 and go up to €800, whereas a silk scarf costs from €50 up.

And the third method?

This is the oldest technique which came from India in the 18th and 19th centuries. It consists of carved wooden blocks which are placed on to the material. I think this is the most difficult and most artistic.

You need to know exactly how and where to place each design and it requires a very steady hand. Eight hours of sleep, no coffee and no aperitifs for this one! Some of the oldest print-blocks were engraved by hand over 200 years ago. The ones we mainly used are in our own family collection but sometimes we borrow or even buy others from other silk families in the area.

How did you learn your craft?

There is nowhere to go and learn these techniques. Most of it is done in-house. There are three of us who are designer decorators in our workshop. It is the same with all traditional jobs, you have to learn the particular skills related to that craft, in the place where it is carried out.

Silk colouring and decoration has been in your family for many generations; what qualities do you need to be able to continue the tradition?

You don’t necessarily inherit all the right qualities, but first you have to really want to do it. Then you need above all patience and discipline and to have a love of beautiful things and like the old traditional ways. Many of my friends say that I have a beautiful job, but that it is ringard, old-fashioned. I think though that I have a joli métier, a great job.

L’Atelier de Soierie is open from Monday to Saturday  www.atelierdesoierie.com