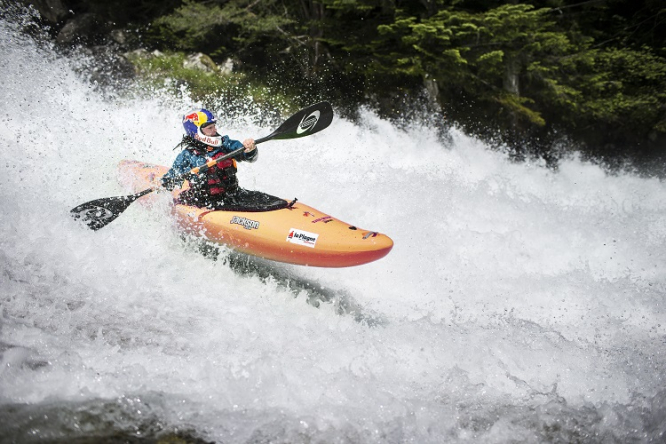 Keeping her head above water
By Samantha David

French watersports queen Nouria Newman is seeking new challenges now she has been recognised as a professional sportswoman – and got her US visa at the second attempt.

Nouria, 28, said: “My visa got denied because I don’t have a stable situation.

“I had to hire a lawyer but I have it now. It’s all good but it was hard not to be able to compete in the extreme kayaking world championships this year.”

The multi-talented kayaker grew up in the ski resort of Val d’Isère and is more at home battling white water than walking the streets of a city, but the biggest races are in the US, with prize money to fund her career.

In her first visa interview, officials at the US embassy in Paris told her to come back when she had a “proper job”, not recognising her professional status in the sport.

“My first attempt got denied because my situation doesn’t quite fit in the forms and it is hard for an immigration officer to understand that I have a job, but not really because it doesn’t generate stable income and it’s also my passion.

“He told me to come back when I would be ‘more stable’ but stability is not something I am pursuing at the moment. With the help of a lawyer in Paris, we explained my case and gathered some evidence which showed that I was an athlete and not trying to immigrate in the US.”

Although she grew up in a ski resort, it is on water, not snow, that Nouria has excelled.

“I’m not really a tomboy but I grew up in the French Alps,” she said. “It’s a good place for being outdoors.”

Nouria said she owed a lot to the local kayaking club, which she joined as a child. Her mother is French and her father a Londoner. “The UK has a great club system – at least for canoeing. The US doesn’t have clubs, but Europe is pretty good.”

She went on to compete in slalom kayak events at international level from 2007 to 2015.

She won medals at the ICF Canoe Slalom World Championships – silver in 2013 and gold in 2014. She also won a bronze medal at the 2014 European Championships in Vienna.

But she lost motivation in that discipline and sought a new challenge.

“I was training in the US and no one was getting on,” she said. “We were using an artificial lake and I just realised I wanted to get back to nature.”

On the spur of the moment, she decided to paddle down the Stikine Grand Canyon in British Columbia, Canada. It is a challenge often described as the Everest of kayaking.

In the process, she became the first woman to run the Site Zed Rapids and followed up by becoming the Extreme Kayak world champion in 2014 and 2017.

As if that was not enough, in 2016 she got a masters degree from Sciences Po in Toulouse, and complemented it with a course in audio-visual journalism in Paris.

All this paled beside her big adventure, the Ladakh Expedition last year, when she spent seven days in India, descending the Zanskar and the Indus rivers in her kayak. She completed the challenge on her own, with no back-up team, no one preparing her camp, and no one helping her at all.

In seven days, she covered 375km and she said she was lucky to survive.

“On the second day, I lost concentration just as I arrived at a fast rapid and I didn’t see the way out of it,” she said. “I got stuck in the wrong place and had to abandon my kayak and swim for it. It was the worst possible situation but I managed to recover all my equipment and continue.”

The video she made during the expedition, and has uploaded to YouTube, is a testament to her courage and tenacity.

“Sometimes people are curious about what I do. They don’t know why anyone would want to go in the river at all. Why would anyone want to kayak down the rapids? They find it shocking that I don’t have kids, at my age. In Western society, people ask when am I going to stop kayaking and settle down, and I’m like but why? I’m really happy. Kayaking is my passion.”

She also went to Argentina, Chile Patagonia and Tibet this year.

“That was tricky,” she said. “My biggest trip in 2019 was Patagonia, it was three months long and the most challenging whitewater I got to paddle this year.

“Dealing with Chinese officials was really hard. Bureaucracy often gets in the way. It was hard in India and Argentina too, but they were more relaxed than in China.” Nature can be unpredictable. “I have to wait for the water levels to be right.

“It’s like skiing: you have to wait for the right weather conditions. You have to respect nature but there are always options – there might be more than one river. There are some rivers that you can paddle with very little water.

“You might not get the best rivers and the rivers you’re aiming for, but you’ll always get something.”

Nouria travels a lot and said: “Expeditions and meeting people are more important than the kayaking itself and the experiences you get out of it definitely make up for sleeping on the ground and living out of a suitcase most of the year.

“I really enjoy coming back to France and settling down at my mum’s place in Pau once in a while.

“I love finding out new things, talking to people, random people. If you stay anywhere long enough, you make friendships outside of the sport, and that’s very important, too.”

She says the psychological aspect of extreme kayaking is important.

“All sports require mental preparation. Even chess has a psychological element to it. Of course I get scared, but a lot depends on decision-making, whether to attempt a challenge or not.

“Some days you’re on top form, mentally and physically and you run it, and others you’re not in the same zone, so you won’t.”

So what comes next? Nouria would love to go to New Zealand, Indonesia or perhaps Pakistan, where there are magnificent rivers.

“Next year I really hope I will be able to go back to the US, to paddle some of the best rivers out there and to compete. I have my visa now.!”