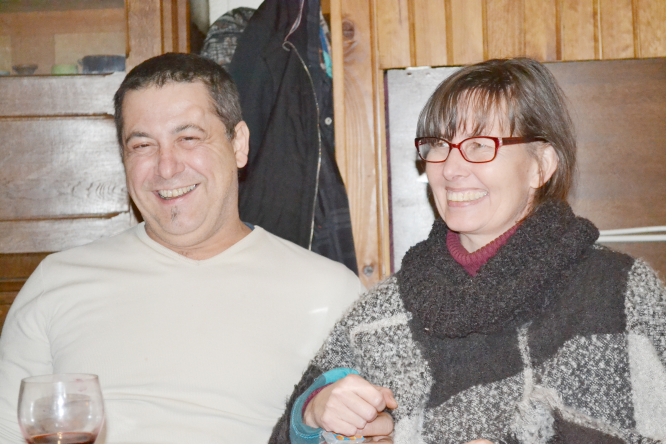 New love for Christophe and Suzanne
By Gillian Harvey

Going through a break-up or bereavement is difficult wherever you live. But moving to a new place with your partner only to find yourself single is particularly challenging.

Moving abroad can put pressure on relationships with “problems amplified as couples try to integrate,” said Christine Haworth-Staines, a Toulouse psychologist and expat advisor. Far from family and perhaps in remote areas, expats who become single may find it hard to know where to start when ready to expand their social circle or find someone new.

Suzanne Masters, 49, turned to the internet when she found herself single in 2013. Having moved over at 22 in 1991, she split with partner, Gareth, 22 years later, although the couple – who have four children together – remain amicable.

First try was with well-known French site Meetic: “It was OK, but you had to pay to actually connect with anyone.”

So she tried free site Badoo: “You start with images of people. If you’re interested you look at their profile. Before meeting my current partner, Christophe, 52, I met one other person, but we didn’t click.

“One reason I was interested in Christophe is he seemed one of the few looking for love, rather than a bit of fun!”

They chatted online, swapping stories about their beloved horses. “After a few days, I had a weekend without the children, so I asked if he wanted to meet for a coffee. He lives 30 minutes away, so we met for a coffee around lunchtime.”

Having never met in person, she was amazed: “I felt comfortable as soon as I walked in.”

Now, four years on, they live with each other on a part-time basis. “I have a flat in Yonne, and I stay there with the kids. He has a house in the country and I live with him part of the time. At weekends, we all go to his house.”

Her children have a good relationship with Christophe – teasing him on his English – and Suzanne gets on well with his 19-year-old daughter and extended family in La Rochelle.

For Leslie Graves, 68, the move to France was to be the start of a new life with wife, Jean. They bought a property in Haute-Vienne with a lake in 2000, to run fishing holidays.

But, just months before the move, Jean was taken ill and died two months later.

Some friends and family felt Leslie should stay in the UK where he had support, but he carried on with the move. “I’d sold the house and I wanted to carry on our dream. I felt as if I had to do it for the both of us.”

Arriving in 2001 with their youngest son Lee, 20, Leslie worked to clear the lake and set up the business. Two years later, when Lee returned to the UK for work and travel, Leslie was living alone. “I was lonely sometimes but I had lots of friends around me; we used to meet up fairly regularly.”

It was through his friends he found love, with Monique, 51, the twin sister of his friend’s wife. “We met when I collected  items for a friend from her family home. Monique had taken a liking to me.

“I arranged a barbecue with friends and invited her family and we got on famously.”

Monique who is a nurse worked in Paris and after a long-distance relationship for a year they moved in together in 2004 when she transferred to Limoges hospital. Eight years on, they married at the mairie.

Leslie said: “For me, continuing to socialise was important. Don’t isolate yourself, get out and about; friends will introduce you to new people.

“Or go online – a friend of mine died a few years ago and his widow has recently found love on a dating site.”

Keith Greenhead arrived in Haute-Vienne in 2007 with wife, Hilary, planning a long, happy retirement. “We moved near a large lake, as I’m a keen yachtsman, as well as golfer.”

Hilary died in 2013 from emphysema, leaving Keith, whose grown-up children are in the UK, bereft.

“I didn’t really think I’d meet anyone else. I just tried to carry on with my life as best I could.”

A friend introduced another friend, Andreia, when she visited from her home in Brazil. “It was literally love at first sight.”

Andreia spoke only a little English, so an online translation site helped them chat and, four months later, she returned to France for good, bringing children Giovanna, now 19, and Alinne, 13, who have settled in well to their new life.

They married last autumn. Keith said: “Before, I was alone; I had time on my hands. Now I’ve got other people to consider. I never imagined a few years ago I’d have such a full life in the future!”

It seems, for those who wish to find love in France, or elsewhere, nurturing and expanding social networks is crucial.

“Having a social network is very important,” agreed psychologist Christine.

“This is not unique to expatriate life; so, the message is that things can work out just as well in an adopted country, it really comes down to the individual”.

Helps users using an algorithm and personality test. It suggests seven matches a day but photos need a paid membership.

Scroll photos of potential matches with basic information, then connect and chat with those who wish to get to know you.

Aimed at expats, it is free initially, with a fee to chat. Tries to avoid spam and the cultural gulf on French sites.