Cookie Consent by FreePrivacyPolicy.com Bob the sink top dishwasher can do it in 20 minutes French News and Views in English | The Connexion
6 may 2021
Classifieds Currency exchange Newsletter
Login Register BASKET
Facebook Twitter

Bob the sink top dishwasher can do it in 20 minutes 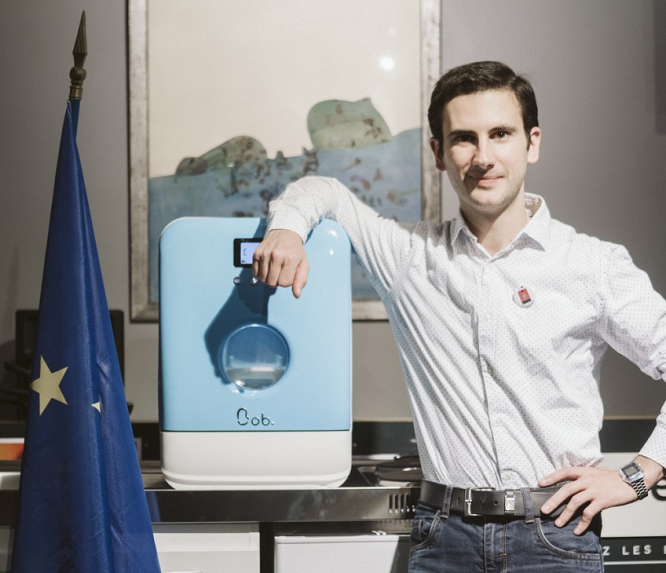 It’s no bigger than a microwave oven... and it’s called Bob.

They are now set to begin full-scale production after selling more than 5,000 machines in a pre-order discount programme.

Damian Py, 25, co-founder and CEO of Daan Tech, the company the pair set up to produce the machines, said: “Dirty dishes just kept piling up in the flat. When we went to look to see what we could buy, the smallest we could find was for six places and took two hours to run.

“We thought we must be able to do better.”

He has been an inventor of electronic gadgets since the age of 11. Having just completed a double masters in electrical engineering, he set out to solve the problem of getting a small number of plates clean economically.

Co-founder Antoine Fichet, who was doing an internship in the same bank, took charge of the mechanical side. The resulting machine uses ultrasound to produce thousands of bubbles to clean plates, glasses and cutlery in a 20-minute wash cycle using just three litres of water.

Bob can sit on a work surface next to a sink, plugs into a normal socket and does not have to be plumbed into the water supply.

The drainage hose can empty into the sink or be plumbed into the waste water pipe.

“It took two years to design the prototype and set up the company,” said Mr Py. “We wanted it to be French-designed and made so we have teamed up with a factory in the Vendée which was part of Fagor Brandt before it went bankrupt and where workers now make coffee machines.

“They are the last remaining factory in France with experience in making dishwashers.”

Parts are sourced in France and Europe, which opened up the path for grant help from the European Commission’s EASME programme.

They have also benefited from incubator schemes aimed at helping new companies.

To launch the programme, the first pre-orders were priced at €199, and 5,000 machines were ordered through the company’s website, daan.tech, in three months. Orders placed now at the retail price of €299 will be delivered as soon as the pre-order backlog is cleared.