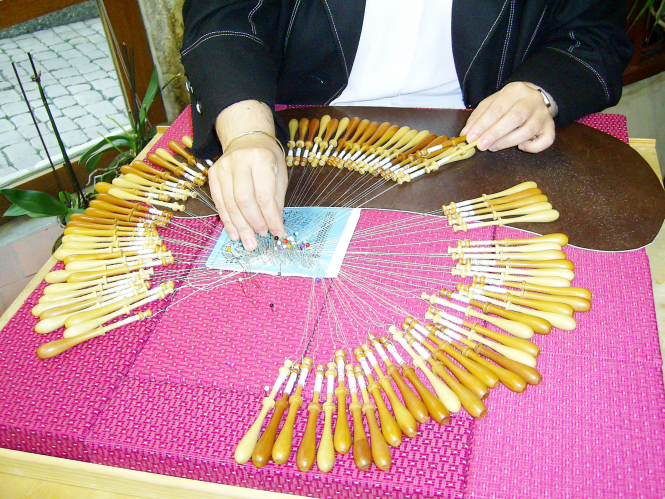 Away from the Institute of Mét­iers d’Art’s poetry, in more practical terms, a lace-maker will use needles, hooks, bobbins or machinery, to knot threads of linen, cotton or silk into intricate patterns.
They need to be creative and capable of visualising patterns on a grand scale, even while working in fine detail, and need to be dextrous and precise, but, also extremely patient, especially when using traditional methods. They also need to have a strong interest in working with textiles.

Lace-making was traditionally seen as a leisure activity in France, often practised in small social gatherings called couviges. Since the end of the Second World War, the increased pace of modern life, the growth of careers for women, and the declining use of lace in fashion, have all contributed to its erosion as both a pastime and a profession.

However, steady demand for lace at the luxury end of the textile market, and a rich network of enthusiastic associations, saw the craft begin to take off again in the second half of the 20th century. There are now two national workshops, based in Puy-en-Velay, Haute-Loire, Auvergne, and Alençon, Orne in Normandy.

In Calais and Caudry (Nord), machine-based lace-making has established an international reputation with 80% of the lace made under the label Dentelle de Calais being sold for export.
The lace-making and embroidery federation (FFDB) represents more than 3,500 workers in about 100 companies with a combined turnover of €230million. Of this, 65% is exports.

A Certificate of Professional Aptitude (CAP) is available in both needle- and bobbin-based lace-making. A CAP is usually taken within the context of a vocational lycée, but no lycées currently offer these courses and the only places they can be taken are the specialist centre in Puy-en-Velay, the Hôtel de la Den­telle in Brioude, Haute-Loire, and Conser­v­a­toire de la Dentelle in Bayeux, Calvados.

The more demanding Brevet des Métiers d’Art (BMA) in needle- or bobbin lace-making is currently only available at Puy-en-Velay. The course is two years long, including a minimum of 16 weeks doing work experience.
If machine-made lace interests you, a CAP in industrial machinery would give you the mechanical basics of the job, but to become involved in the design aspects, you could follow a more general textile- based training course, such as the prestigious five-year degree (diplôme) in textile design that is run by the Ecole Nationale Supérieure des Arts Décoratifs in Paris.

For anyone seeking to get a taste of lace-making without trying for a formal qualification, the Puy-en-Velay centre is an excellent place for information on the 450 lace-making clubs active across the country.

Bobbin lace-making will not make a fortune, but it is therapeutic

The origins of lace-making are unknown, but some claim it was invented in Puy-en-Velay in 1407 by a young embroiderer called Isabelle Mamour. Whether true or not, Puy-en-Velay is to this day a centre of international expertise in bobbin lace-making.

Its Centre d’Enseignement de la Dentelle au Fuseau (Bobbin) prepares up to 13 students each year for the CAP and BMA in bobbin lace-making, and has around 280 participants in training courses, aimed at both professionals and amateurs.

Mrs Mick Fouriscot is the driving force behind the creation of the Puy-en-Velay lace- making centre. She set it up in 1974 with the aim of preserving and reviving what she saw to be a dying art-form.
Rather than continuing to churn out traditional lace objects, such as doilies and antimacassars, for which demand had all-but disappeared, she set about using the centre to make more contemporary artefacts, which are viewed as works of art rather than functional objects.

One example is work they did for the Tour de France’s stay in Puy-en-Velay, where the centre made a beautifully intricate lace version of French cyclist Romain Bardet’s bicycle.
Unlike many of the métiers d’art in this series, and unlike machine-based lace-making, it would be very difficult to make a living from the sale of handmade lace-objects alone.
Centre vice-president Mireille Roche said: “Bobbin lace is time-consuming and is thus very expensive, to make a living you have to teach as well”.

But why teach a craft where it is hard to earn a living? “When people come to learn how to make lace, they arrive with all life’s stresses, but leave at peace with themselves. It’s therapeutic. There is huge demand for such calming activity.”

She also sees it as inspiring to become part of a tradition that stretches back centuries. She said: “When you make lace you are doing what your grandmother did, and her grandmother before that”.
As well as training professional lace-makers and teachers, Puy-en-Velay organises its own network of couviges (lace-making gatherings).

In these, people sit and make lace together. They hark back to a centuries-old sociable tradition where, in the evening, women would get together to make lace and chat, their husbands often using the time to carve wooden objects nearby.

If lace-making interests you as a hobby rather than as a profession, you can contact the centre for information.