Explained: The hundreds of ‘pays traditionnels’ that make up France 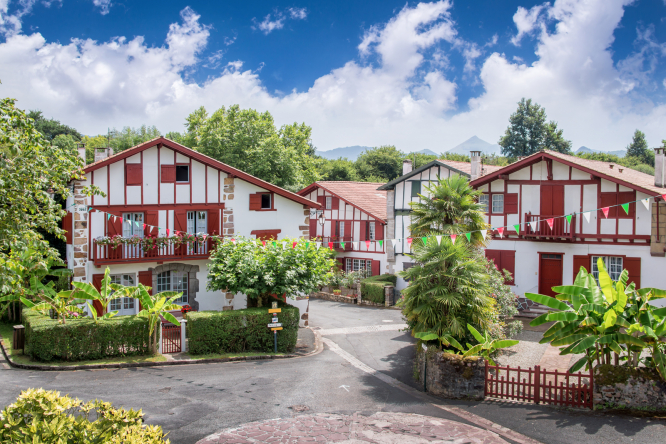 Pays Basque, one of France's 'pays' has its own architecture, language, sports and customs, and a renowned cuisine Pic: Delpixel / Shutterstock

It took me some time after moving to France to figure out where I lived.

Yes, I knew it was the south west. I knew the name of the region, Midi- Pyrénées (as it was then), and of the department, Hautes-Pyrénées. But people around me kept referring to somewhere called Bigorre, as if that were their real homeland, even if I could not find it on any modern map.

As I travelled around France researching travel guides, I began to understand what was going on.

France has a geography other than that which Parisian bureaucrats would have us rely on. The modern divisions of public administration are superimposed on a much older and more enigmatic unit of territory: the pays.

The word pays (the singular and plural are spelled the same, ending with an s) has several translations.

Most commonly, it means “country”, as in nation state: France est un pays d’Europe (France is a European country).

Since 1999, Pays (with a capital) has also been used as an official title for a new item of local government: a group of communes working together to optimise economic and social development.

The oldest and most interesting sense of pays, however, is the pays traditionnel, a micro-region, sometimes referred to as a petit pays or région naturelle – although that term is somewhat misleading because it ignores the input of human beings. The whole of France, including the island of Corsica, is unofficially divided into a patchwork of these pays traditionnels.

No one can agree how many there are because some exist only as nostalgia, and others are best described as subdivisions of larger units.

The two authoritative books on the subject give the total as 426 and 546 respectively. They range from the pays d’Ac’h in Brittany to Yvelines near Paris, which is both a pays and a modern department.

Brittany and the Auvergne each consist of around 20 pays superimposed on the standard political geography. Sometimes, a single department can be divisible into seven or more pays.

Pays may be of varying sizes but the concept behind them all is the same. A pays is an area in which a shared culture is determined by a shared natural geography.

Before the advent of modern farming, a particular local soil, landscape and climate (summed up in the term terroir) dictated what crops could be grown, which materials were freely available for building with, and hence the lifestyle of the inhabitants.

Often the boundaries of pays are known rather than formalised: one pays may stop at a river or crest of hills, and another takes over.

Typically, a pays can trace its roots back to an ancient unit of government. Some derive from the Roman pagus, a domain governed by a powerful and wealthy man.

Almost all pays owe their origins to feudalism and the ancien régime.

'They were once duchies, counties and provinces, or they were tracts of land governed by the abbots of wealthy monasteries'

The important thing to grasp is that a pays is somewhere one could – and often still can – identify with and belong to.

Before modern communications and the mobility of labour, the pays defined the person in a way it is difficult for us to imagine today.

The expression enfant du pays (native son, or son of the soil) encapsulates this attachment to the land.

The very simplest definition of a pays reminds us of the value of hyper-locality.

“A pays,” wrote Elsie Burch Donald in The French Farmhouse, “was generally the distance a man could travel in a day and return home – roughly 20 miles and within this area lay his entire world: his home, farmland, village, local market town, and probably all his relations, for many peasants never travelled beyond the boundaries of their own pays.

“As a result, the pays engendered a feeling of belonging and loyalty that amounted to a concentrated form of nationalism.”

Today, the average pays exists mainly in the minds of its inhabitants and in the brochures and websites of tourist information offices, which make good use of them to attract visitors. In a pays, you can immerse yourself in a distinctive way of life.

This is not to say they have lost their importance. Pride in pays is very much alive, despite the centralising pull of Paris. Preserving the notion of the pays in the 21st century can be a way of the old keeping traditions alive, and giving attention to crafts and methods of building that might otherwise be lost.

Anyone interested in researching local history, meanwhile, needs to understand the organisation of France into pays which existed long before the Revolution sought to rationalise the territory into departments. No book published before the end of the 18th century refers to somewhere called “Hautes-Pyrénées”.

You have to look under Bigorre.

If the centralised bureaucracy strives to make every corner of the countryside fit into a model of standardised rational efficiency, the promoters of pays want the opposite: to celebrate and safeguard the diversity and idiosyncrasy that makes France the fascinating kaleidoscope that it is.