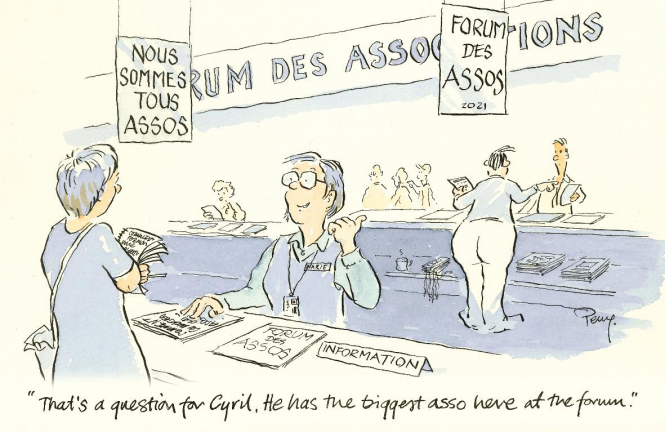 In its most basic form, an association can be defined simply as a group of more than two meeting 'for a purpose which is not for sharing profits'
By Connexion journalist

La vie associative – the association sector – is seen as a vital part of French society. Joining an asso can be a good way to integrate and donations can attract tax relief.

Many French associations recruit new members at an annual forum des associations organised by the mairie, usually held around the start of autumn at la rentrée.

Do not worry if you missed this – many clubs are open to join all year round, and unless you are in a very isolated area, there is likely to be something that interests you nearby.

If not, you could even set up your own to find people who share your interests.

In its most basic form, an association can be defined simply as a group of more than two meeting “for a purpose which is not for sharing profits”.

It is a broader term than the British “charity” and includes many groups sharing a hobby, sporting, cultural, educational or other activity, as well as those that actively seek donations for a good cause.

An association de fait (de facto) is where a group meets for an activity but carries out no formal set-up. It has limited powers and no legal identity.

Most are an association déclarée, also often called associations loi 1901

This kind is officially declared and has its own legal status. It can receive grants, ask for membership payments, open a bank account, employ someone, and own or rent a building for meetings.

Many such associations are also described as being d’intérêt général (of general interest) provided they do not cater for an overly small restricted group.

These can receive donations which allow for income tax relief – the amount of the donation is inserted on the income declaration and 66% of it is available as money off the donor’s tax bill (75% if the body helps those in difficulty, with food, shelter or healthcare).

One of these with at least 200 members and at least €46,000 a year in its accounts can apply to be officially d’utilité publique (useful to the public) if its scope is more than merely local. This includes large charities such as the Red Cross and Médecins Sans Frontières.

Unlike many smaller associations, they can receive – taxfree – bequests.

Certain general interest associations are also an association agréée, meaning the group has an accreditation because it works closely with a ministry.

Examples range from Amnesty International France to the French Federation of Bicycle Users, both attached to the Ministry of Education. This allows access to specific grants.

There are special rules for associations in Alsace and in Moselle. For example, they have to have at least seven members.

Name: Make sure it is one which has not already been taken by another organisation or commercial brand or might be confused with one.

First meeting: Hold an assemblée constitutive to agree on the statuts (the rules), siège social (address) and who will run it.

Statuts: Each association draws these up for itself. They typically include its aims and membership conditions, tasks and functions, and how it can be modified or shut down.

They should also provide for an assemblée générale (annual general meeting) when major decisions are taken for projects and budgets.

The statuts usually create two bodies, the conseil d’administration, made up of all the people with a role in ensuring it is run properly, and le bureau, a more restricted group with named roles and set responsibilities.

Often there is just a bureau in a small association, including a president, treasurer and secretary, sometimes with a vice position for each.

The president represents the association, leads it and has legal responsibility; the secretary is responsible for admin and takes minutes. The treasurer manages the finances.

Declaration: Key facts about the association have to be declared formally, attaching the minutes of the assemblée constitutive, the statuts and name, profession, address and nationality of bureau members.

It will be processed more quickly if you do it online.

This link will take you to government platform France Connect, which gives access to many administrative sites, such as Ameli for state health insurance and impots.gouv.fr for tax.

You can use an existing name and password for these, otherwise you will have to set one up. You can also post or take the declaration to the greffe des associations office for your department).

Inscription: The association will be listed on the répertoire national des associations (RNA) and will receive an RNA number. Registration is complete once it appears in le Journal officiel des associations et fondations d’entreprise (JOAFE), published on Saturdays.

You can also apply to Insee for a Siret number, allowing you to employ people and apply for state and local authority grants.

There is a useful kit gratuit pour votre association with various documents and examples at associations.gouv.fr.

More than 1,000 information points are listed on this site, which advises on how to run your association.

Also useful is helloasso, a free website used by 80,000 associations for a secure online payment system, allowing them to manage their finances for membership, sale of goods and tickets. It is funded by optional user donations.

Our main image was drawn for The Connexion by artist Perry Taylor.

How many kinds of French minister are there?

What Britons in France can expect from the taxman in 2021