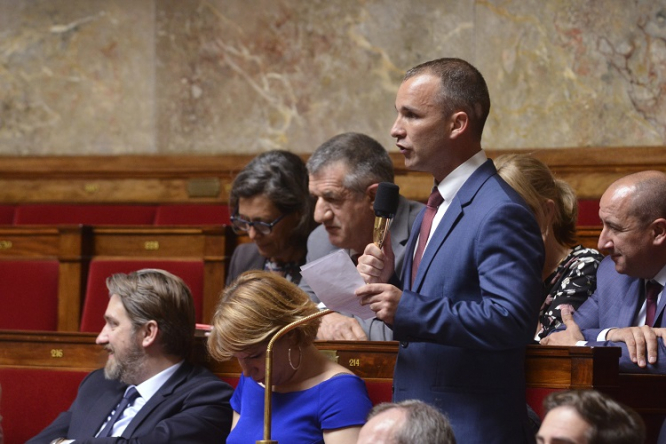 ‘The fines are not high enough. I want them to go up to €375,000’ says MP Christophe Naegelen
By Jane Hanks

An MP is hoping his bill to crack down on unwanted sales calls and improve Bloctel will be successful when it gets its second reading in the Assemblée Nationale this month.

Bloctel is a “do not call” registry that allows consumers to block unwanted business telephone calls.

Christophe Naegelen, UDI MP for the Vosges, says he wants to make Bloctel work for the benefit of the consumer and honest companies, which should remain entitled to use telephone sales in their businesses.

The free-to-use government-backed service has been widely criticised as ineffective.

Two consumer magazines, 60 millions de Consommateurs and UFC-Que Choisir, have reported its shortcomings and many readers have told us it does not cut down the number of unsolicited calls.

Bloctel is run by the private company Oppostel and was launched in 2016 in response to changes in the law.

It replaced Pacitel, which was widely reported not to work.

It takes 30 days from filling in the form at bloctel.gouv.fr for the service to become fully active. Those who then continue to receive nuisance calls can report the incident and the number of the caller but the process of reporting is lengthy and complicated.

Any company that wants to carry out a telephone sales drive has to send its list of prospective clients to Bloctel, which then removes the numbers of any people who have signed up to the scheme.

The Ministry of Finance told Connexion there are four million people signed up to Bloctel but, according to Mr Naegelen, only 800 companies adhere to the rules.

The others simply ignore Bloctel and continue to phone all numbers.

The maximum fine for companies not adhering to Bloctel rules is €75,000 but that is one of the major drawbacks, according to Mr Naegelen.

“The sanctions are not high enough,” he said. “I want them to go to €375,000. I also want to see the fraud department, the General Directorate for Competition Policy, Consumer Affairs and Fraud Control (DGCCRF), use more of its manpower to deal with this problem so the system can be policed properly.”

In 2018, 564 companies were controlled and seven were fined, sanctioned and “named and shamed”.

However, this is not enough, according to the MP, who says resources should be better used to make sure companies are controlled, as this is a matter that affects a lot of people.

He wants companies to sign a charter where they agree to introduce themselves when they telephone and to only phone within certain hours.

In Germany, cold calling is forbidden and there is an opt-in system, so consumers will not receive telesales unless they sign up to accept them.

MP Pierre Cordier tried to introduce a bill demanding an opt-in system for France but, so far, without success.

Mr Naegelen thinks his solution is better: “An opt-in system would not solve the problem.

“Companies find telesales a good way of finding new clients and will not give up easily.

“I think they would just ignore an opt-in and continue as they do today. Companies should be allowed to exercise their right to prospect for business. If it was outlawed, people who work in call centres would lose jobs.”

Another clause in the bill aims to fight fraudulent phone calls, which charge over the normal rate.

Mr Naegelen also wants to ban calls from overseas call centres, as this takes work away from France.

“At present, that would not be acceptable under European law,” he said. “So I am working to find ways round that, and perhaps it can be added to the bill.”

The bill was accepted by the Assemblée Nationale and Sénat in its first reading so he hopes it will be similarly well received for its second reading in January.

Unsolicited business calls are the bane of many phone users’ lives

Bloctel? ‘It’s about as much use as a chocolate fireguard’

Readers who are constantly harassed by unwanted sales calls continue to contact The Connexion.

David Abbott, who retired to France 16 years ago and lives in Deux-Sèvres, between Niort and Poitiers, has found ways to halt the constant barrage.

He said: “I started getting problems when I looked into the ‘insulation for €1’ offer and got flooded with calls from companies. These have gone on for months.

He has managed to block the calls through a free mobile phone app; Should I Answer.

You can block unwanted numbers but still see numbers that tried to contact you, but your phone will not ring.

The app also collects data from users to make lists of “bad” numbers. Whenever an unknown number calls, the app runs a search to see if it is on the blacklist and will give you a warning or block it.

Mr Abbott’s solution for his landline phone is to unplug it, and only use it when he wants to make a phone call. He can check who he needs to speak to on the answering service.

Mr Abbott signed up to Bloctel but said: “That has been about as much use as a chocolate fireguard. I have had to find my own solutions.”

There are similar blocking apps and internal systems available for mobile phones, including Orange’s phone app for all users, whether signed up to Orange or not.

Panasonic has launched the KX-TGH720 phone, which asks callers who are not registered on the phone to enter an access code before the handset rings.