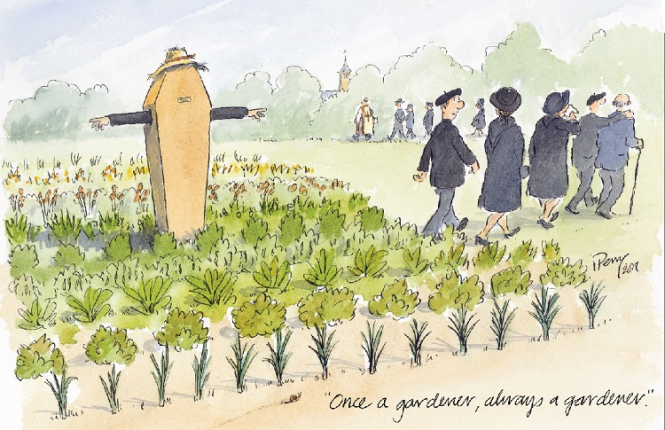 An increasing number of people are turning towards civil funeral ceremonies.

Religious ceremonies are still the most popular choice but 38% of people – according to a study of 15,000 people who used comparative website Meilleures Pompes Funèbres this year – would prefer a civil service.

In France, burial or cremation must take place within six working days of death unless there are exceptional circumstances, so it is worth knowing the options in advance.

Families can create their own ceremony, ask the funeral parlour to help, or call on one of the few English-speaking ‘celebrants’ in France.

The ceremony can take place at your home, the cemetery, the crematorium or the funeral parlour.

Leslie Mitchell (lesliehumanist.com) is a registered celebrant of the Humanist Society Scotland who lives at Saint-Pardoux, Haute-Vienne.

He said that, after talking to the deceased’s family and friends, he can create a sympathetic ceremony with two to three days’ notice. He aims “to give a recognisable portrait of the deceased, and to provide a ceremony which is dignified, warm and memorable”.

He charges €200, plus travel expenses, and will consider anywhere in France or give contact details of other celebrants if more appropriate. He will speak in English or French, or both, as requested.

Elicci (elicci.fr) was created in 2014 to provide musicians and singers to play classical, jazz or gospel music, either from their own repertoire or music of your choice.

Amateur violinist Aliette Frangi came up with the idea after being asked to play at a funeral. She has developed a network of nearly 250 professional musicians across France.

She said: “We can help families create something beautiful for their ceremony and we can work at very short notice. It is a new idea in France but is gaining popularity.”

It costs €360 for one musician who will play three or four pieces of music. Prices increase with the numbers of musicians.

Britons wanting a Church of England service can contact the Anglican church in France.

Often, an Anglican funeral service will not take place in an Anglican church, as there are not many, but a priest will travel to hold a service at a crematorium chapel or local Catholic church.

Under normal circumstances, a coffin must be buried in the commune-owned cemetery where the deceased lived, died or where there is a family tomb. It is possible to arrange burial in another commune, with the consent of the mayor there.

As cremations began to grow in popularity, a 2008 law introduced stricter regulations for the disposal of ashes.

You cannot keep an urn with ashes in your home, or bury it on private property, without permission from the mairie. You cannot scatter ashes in your garden or a public garden, or on a public road.

You can scatter ashes at sea or in an open, natural space. In this case you should notify the commune where the deceased was born, so they can record where the ashes have been scattered. This would seem difficult for someone not born in France, so if you want to be sure, ask your mairie.

Most cemeteries have burial areas for urns, columbariums or places to scatter ashes.

There are a few ‘natural’ cemeteries. Niort mairie opened the first one in 2014.

Instead of rows of stone and marble graves and tombs, there is a garden with trees and grass. You can scatter the ashes, or bury a biodegradable urn or coffin.

Only natural flowers are allowed on the site. The cemetery was awarded Best Local Initiative by the Senate, so maybe other communes will be tempted to follow in the future.

There are two privately- owned cemeteries where biodegradable urns are placed at the foot of a tree, which were created before the 2008 law made it illegal for new ones to open.

The Jardins de Mémoire, at Bono, Morbihan, are full but owner Lionel Le Maguer says families call him daily, asking for space. He is planning a new garden for next Easter. Families will not be able to bring their ashes but can have a tree dedicated to their loved one.

Director Réginald Freuchet said it is a shame that France no longer allows similar privately-owned cemeteries to open, unlike many other European countries.

His site is available for people from all over France, and he says he has British clients.

Martine Saussol from Alès, Gard, was a pioneer in 2015 and sells cardboard coffins for €390 including transport costs.

They can be ordered directly from her website (eco-cerc.fr) or via an undertaker.

She said: “Not all under-takers are willing to sell eco-coffins yet, but more and more people are looking for this for ecological reasons.

“There are 540,000 deaths a year in France and one tree of at least 60 years old is needed to make five coffins.” She also sells biodegradeable urns.

You can have a landscaped garden tomb, and many companies offer this service. Find them by searching online for sépultures végétales.

Some French lifeboat stations will make a special journey to take ashes to be scattered out to sea, and you can make a request directly to one of the SNSM branches.

There is no charge but in most cases a donation is given in return for the service.

As it is likely to be for someone who lives locally to them, they may feel personally involved in the ceremony.