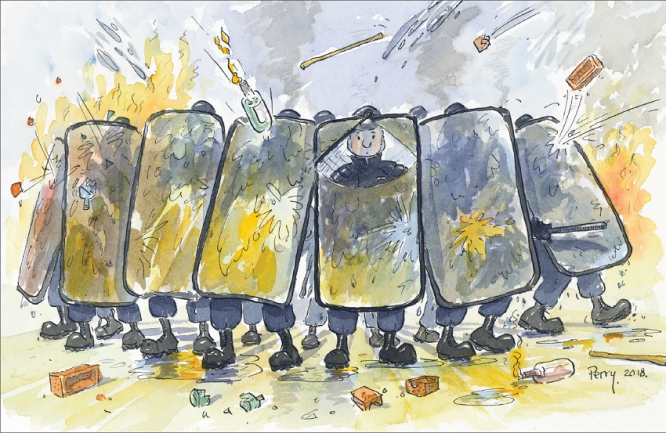 Events were tense during the recent gilets jaunes protests against fuel prices and general tax rises. On the Champs-Elysées in Paris, CRS riot officers used tear gas to push back protesters attempting to breach police lines.

They also had water cannons ready and grenades assourdissantes (stun grenades that flash and bang and are thrown into the air) were used.

One CRS member told BFM TV it was the worst situation he had seen in 19 years in the job.

“At one point they were throwing things at us and we were saying to ourselves ‘we mustn’t get to the point where we have to use our weapons in self-defence’,” he said.

The TV station reported that – in scenes reminiscent of the May 1968 student and worker protests – bottles and paving stones were thrown. Makeshift barricades were created by protesters out of planks, building site barriers, plastic bins and other street furniture.

The CRS officer said: “Peo­ple don’t realise we’re human too and the uniform we wear doesn’t protect us from death.”

According to left-leaning newspaper Le Monde, the CRS was heavy-handed at times on the last weekend in November, with barrages of officers equip­ped with reinforced trucks at the end of the Champs-Elysées nearest the presidential palace.

This came after they were caught out the weekend before when protesters came near the Elysée. Le Monde said: “On Sa­turday morning they straight away started using tear gas against little disparate groups which until then had been perfectly non-violent.” Elsewhere around France there was a CRS presence at locations where the gilets jaunes protesters were active, on roads and roundabouts and at motorway péages.

A reassuring presence helping to keep the peace and public safety – or an oppressive tool of the capitalist state? It depends on your politics. CRS forces are generally recognisable from their heavy protective gear, often with riot shields and helmets, and the red and white logo on the uniform showing a flaming torch and an oak leaf wreath.

The Compagnies Républicaines de Sécurité (CRS) were created in 1944 to fill a gap after the dissolution of Vichy regime paramilitary groups. They were established on a permanent national footing after the government considered they conducted themselves well during strikes in 1947.

Their role is maintaining and re-establishing public order – essentially riot and crowd control – including dealing with terror attacks.

Officially the CRS are “companies” of the police, and une CRS usually refers to one of the companies, whereas, informally, un CRS means a CRS officer. Their motto is “To serve” and their logo, known as the CRS flame, was designed by a French painter from Versailles.

In the past the CRS were especially present at flashpoints of unrest, such as May 1968 in Paris or the 1995 fisher­men’s protest in Rennes, when the 17th century Brittany parliament building was set alight.

They were also involved in the Algerian war. Thousands were sent over in the period 1952-1962 and many were killed or wounded.

Unlike the officers, who undeniably have a challenging job, those involved in such protests see the clashes differently. Take singer-songwriter Maxime le Fores­tier’s 1972 song, Mon Frère, about things he would have liked to have done with his imaginary brother, in which he tenderly sang that: “If life had been kinder, she would have divided into two, the pairs of gloves, the pairs of smacks; she would surely have shared out the words of love, and the paving stones, girls and baton blows.”

The officers have chosen this specialism and receive appropriate training. As well as 60 general CRS companies, there are nine for motorways, two for mountain rescue and six motorcycle units. There is also one specialising in escorting celebrities, notably the president of the Republic, called CRS no.1 (la Musique de la Police Nationale, a professional fanfare band and orchestra, is part of it).

Another role, since 1958, is acting as beach lifeguards (who also carry a gun in case of a terror attack), though this could stop next year after a state finance watchdog said it was costly. The government thinks they should focus on their main work instead.

They often work in partnership with mobile gendarmerie units (known as la jaune from their gold insignia), who are technically soldiers while the CRS are fonctionnaires.

Since 2009, both come under the authority of the Interior Ministry. Below this, the hierarchy is the director general of the Police Nationale and the Direction Centrale des CRS (DCCRS). There are seven zone headquarters, in Vélizy (Yvelines), Lille, Rennes, Bordeaux, Marseille, Lyon and Metz.

The CRS tend to work mostly in or near cities and are often present at strikes and protests.

The role includes protecting people and buildings from violence, including watching places of worship or ceremonies and festivities if there is potential for violent protest or opposition. They also aim to stop related crimes such as looting.

The CRS have a support role at borders, aimed at preventing illegal immigration, especially of dangerous individuals.

To enter the service, people must be aged 17-34, have a driving licence, a clean criminal record, be in “perfect physical condition” and at least 168cm tall for men or 160cm for women.

The main image above was drawn by artist Perry Taylor. For more of his work see www.perrytaylor.fr