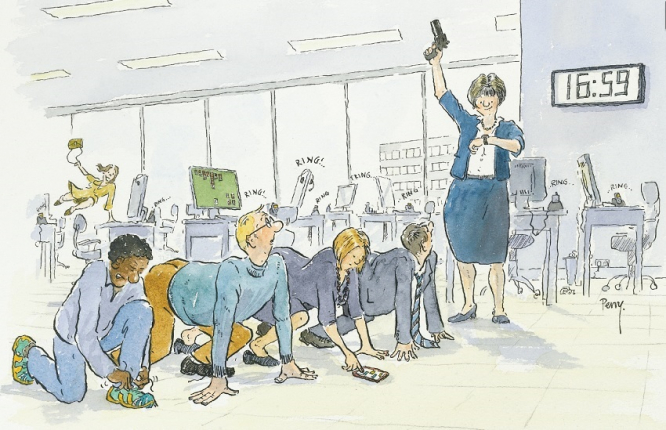 France is famed for its large number of fonctionnaires, often translated as civil servants.

On the face of it, the sector – la fonction publique – appears bloated, with more than five million workers, compared to 330,000 UK civil servants.

They form 20% of the workforce and their numbers have steadily increased.

President Macron promised in his manifesto to slim the sector down but many roles included in la fonction publique are not included, for example, in the UK civil service.

These include Police Nationale officers, soldiers, local government workers, public sector nurses and state school teachers, so it is hard to make a comparison.

The special status concerns titulaires, who have passed an entrance exam, as opposed to contractuels, on ordinary work contracts with less job security.

Some jobs, such as being a schoolteacher, can be done by either but more senior roles are usually reserved for titulaires.

Around a fifth of public sector agents are contractuels.

In total, there are more than 300 jobs, from officials in charge of management of a local authority’s buildings or organising childcare or sports services, to midwives, lab technicians, town planners and septic tank inspectors (tinyurl.com/yyk5jrfq).

Some 5,000 Britons work for the French state, of whom 1,715 are titulaires. A French “no-deal Brexit” law said they would keep their status, exceptionally, despite the fact that this is usually reserved for French and EU citizens.

Fonctionnaire status was established in a 1946 law by a communist minister.

It aimed to help preserve impartiality and freedom from political influences. It includes recruitment by a competitive exam, a specific pay structure, career progress by set levels depending on qualifications, and a social security and pension regime.

Family benefits are different from the private sector and the pension is calculated on the last six months, as opposed to averaging the “best 25 years”.

Fonctionnaires have “a job for life”. If their post is axed, they are moved to another role at the same level. In exceptional cases, they are paid to stay at home and do nothing if no suitable role is available.

In theory, a fonctionnaire can be sacked if there is proof they are incapable of, or unsuited to, their job but only 55 are said to have been sacked for this over a 30-year period.

All fonctionnaire posts fall into one of three categories, depending on qualifications for the entrance exam: A - often with a lot of responsibility, requiring at least the Bac, plus three years of higher education; B - the Bac; and C - the Brevet.

Pay is higher according to category and it is possible to rise in category via internal exams (contractuels may also “titularise” via exams).

Passing the exams leads to a year’s experience as a stagiaire before becoming a titulaire.

While a titulaire’s pay is set by grade and time in the job, a contractuel’s is in theory negotiated with the employer.

In practice it may be “take it or leave it”. They are often on short-term CDD contracts and if their post is axed, they lose their job. Critics say titulaire status can lead to complacency and a tendency to do the minimum and lack initiative.

Fonct­ionnaires are twice as likely as private sector workers to take sick days and only lose pay for one day before going on to full sick pay, compared to three for the private sector.

Before last year, there was no lost day for fonctionnaires.

In 2010, council fonctionnaire Zoé Shepard wrote a book Absolument Dé-bor-dée (absolutely snowed under) in which she claimed she was given hardly any work to do. Its subtitle was “How to do the 35 hours – in a month”.

More recently, Le Figaro said an internal Finance Ministry report found that 30% of fonctionnaires d’Etat do not work a full 35 hours, partly due to extra days off, such as a so-called “winter week” or “ministry days”.

Emma­nuel Macron said in his manifesto he would improve quality and efficiency in public services and reduce numbers where reorganisation and more online services allow it.

He said that over his term in office he would cut 50,000 state posts and 70,000 in local government by not replacing retirees.

He said he would decentralise, giving more res­ponsibility to workers “on the ground”, improve pay of those with the hardest jobs, and encourage innovation and mobility.

He would also change the system by which fonctionnaires progress uniformly in pay to take better account of what each job involves.

There should be more recruitment of senior people from the private sector and more use of contractuels.

A survey for BFM Business found a majority in favour of removing the “job for life” and special pension regime, and of reducing numbers.

Surveys also indicate that being a fonctionnaire is less attractive to young people than it was, with only 16% envisaging such a career, compared to 73% in 2012.

The government aims to change the rules so more senior and long-term jobs can be done by contractuels. It says change is needed to make the public sector more “reactive” to public expectations.

Unions say the government wants to make everything work like the private sector to the detriment of workers’ independence and acquired rights.

One proposal is for a new “project contract” in between the current long-term (CDI) and short-term (CDD) work contracts. This would be for a contract of between one and six years.