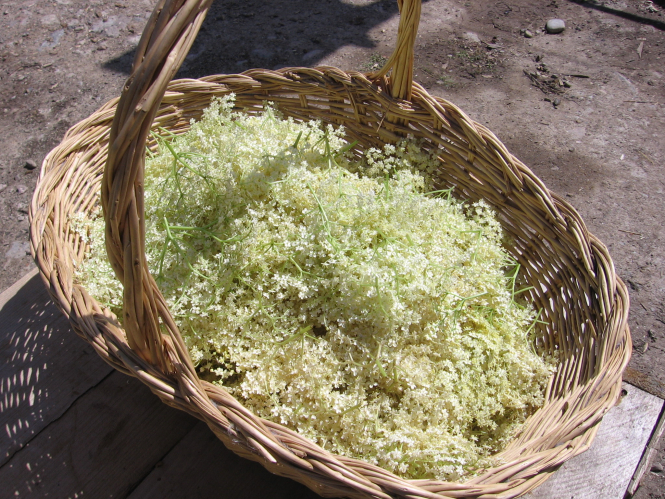 'A man running a survival course was jailed recently when one of his students picked a poisonous wild carrot, thinking it was the very similar-looking wild parsley, and died after putting it in a soup' Pic: Spitfire - CC BY-SA 3.0

It common in rural areas to see locals, often of a “certain age”, in the fields with baskets collecting plants to eat in the spring in France.

You should only eat plants you are absolutely sure about – eating a poisonous one by mistake can be deadly.

A man running a survival course was jailed recently when one of his students picked a poisonous wild carrot, thinking it was the very similar-looking wild parsley, and died after putting it in a soup.

Use common sense when picking too – avoid areas which look and smell as if they have been marked by animals, which are near to heavily trafficked roads or factories, or which are in the middle of cultivated fields or vineyards where pesticides might have been recently sprayed.

Washing plants once you get home is a good idea – parasites, including liver flukes, can be picked up from plants growing in wild areas.

One of the most common edible plants collected are dandelions – the leaves – which in spring are tender and slightly less bitter than later in the year. They are wonderfully fresh and green at a time of year when there is not much else around.

They are often served as a bit of greenery in baguette sandwiches with butter or cheese.

The common French name pissenlit is a tribute to their diuretic effects, which seem to affect some people more than others. Another name is dent-de-lion, supposedly where the English dandelion name originates.

As well as stimulating the kidneys and bladder, pissenlits are meant to be excellent tonics for the liver and are full of vitamin C.

Nettles (orties in French) are another edible wild plant at their best in spring before they flower, when leaves and the tops of the stems are tender.

It is best to wear gloves, long-sleeved shirts and long trousers when collecting as it is very easy to brush against a freshly picked leaf and suffer stinging consequences.

The plants usually lose their sting an hour or so after being cut, and are often eaten like spinach, washed and cooked quickly in a pot with a tightfitting lid and lots of butter and garlic, or put into soup.

Surprisingly, for a plant with such a sharp sting, they are virtually tasteless, so if putting them into a soup, rely on other ingredients to provide flavour.

A more modern trend is to incorporate fresh nettle leaves into smoothies – again, they do not taste of anything very much but they give a lovely bright green, fresh colour.

Older French people praise nettles as a tonic for the liver. In late winter and early spring, in many parts of south west France where there are vines, wild leeks are a traditional delicacy.

They are often found growing in vineyards. Now they are usually only picked when people know the vines are bio and there has not been any recent spraying.

They are usually thinner and smaller than cultivated leeks and have a more delicate taste, but are delicious stewed in wine with butter until tender.

Another spring treat that French families search for is wild asparagus.

Looking like thin green asparagus, it is usually found in rocky scrubby areas on the edges of woods – sometimes called garrigue in the south of France – which have little agricultural value apart from goat pasture.

The key to finding it is recognising the climbing asparagus fern, with spiky-looking leaves a bit like wild juniper leaves, which string themselves through shrubs and small trees, very different from ferns of cultivated plants. The asparagus shoots are found at ground level nearby.

Stalks are often a bit more woody than cultivated green asparagus, so tough bits should be chopped off before cooking – they can be used as flavouring in stocks.

The wild asparagus is then steamed and often served with melted butter or a hollandaise sauce, like cultivated asparagus, or put into an omelette.

In humid woods, some people hunt for a form of wild garlic, l’ail des ours (bear garlic). The leaves, with a pungent garlic flavour and smell, can be incorporated into a salad.

Only pick it if you are absolutely sure – the leaves can look like poisonous lilies. Going with an expert to identify it is a good idea. Elderflowers (fleurs de sureau) are a late spring treat. When picking them, make sure to smell them first.

Once you have found a tree with a scent to your liking, pick away – a pair of secateurs is useful.

It is always a good idea to let the flowers stand upside down on paper in a cool spot for a while after picking to allow insect wildlife to escape.

Traditional elderflower syrups are still made in parts of France, along with elderflower 'champagnes'

British and French recipes do not vary, to the surprise of some.

Another use for the flowers is to fry them in a light batter and serve them in a dessert. A runny fish-and-chips batter is ideal, and they deep-fry a golden colour in a minute or two.

Serve with a sprinkling of sugar and crême fraiche.

Regional drinks vary across France but an aperitif made from the spring growth of pine trees is popular in some areas of the south west.

Traditionally, tips should be cut before Pentecost. They are put into a container with rough red wine and sugar to taste and left to macerate for 10 days before being bottled and left for at least a month.

The result is rough wine transformed, not only by the sugar but by the aromatics from the pine, which are refreshing and not nearly as harsh as Greek pine resin-based wines.

Walnut trees are likely to be owned and not considered “wild”, but a similar method is used to make vin de noix with small green walnuts picked in late spring and early summer.

Leave to macerate with wine and sugar for around 10 days. When vin de noix is bottled, many people add eau de vie, but it is not necessary and can make it a bit heavy for an aperitif.

An alternative liqueur, dismissed sometimes as a truc des Italiens, is made by macerating the quartered walnuts in eau de vie and sugar for three months until the liquid is so dark brown it is nearly black. It is absolutely delicious on ice cream.

18th century château in southwest France up for auction from €90,000
17 June 2021
More from Everyday Life
More from Connexion
Get news, views and information from France
Join the newsletter
Subscribe to The Connexion