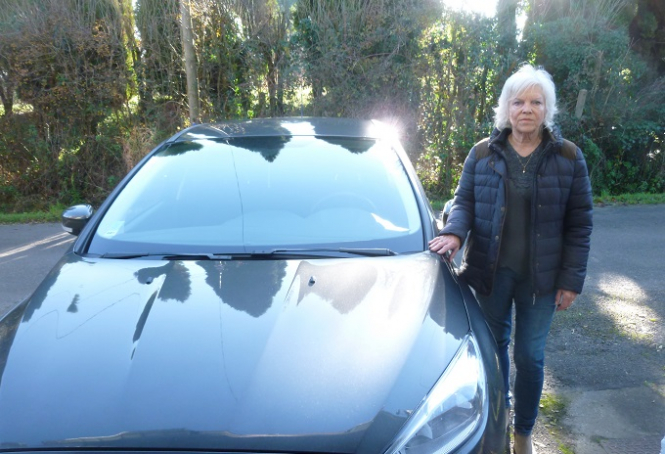 Reader Maggie Flint is unable to drive
By Connexion journalist

Mrs Flint, from Charente, applied in March as her UK licence was due to reach the end of its validity when she turned 70 last July.

She was unaware of the delays that have hit the CERT licence exchange centre at Nantes prefecture, which have left many people waiting for more than a year.

Mrs Flint applied by post, as required, with a recorded delivery letter, which has been the usual system since 2017, when all exchange applications were centralised at Nantes.

Since then, long backlogs have occurred as demand was greater than expected and staff struggled to cope.

She had still not received the attestation de dépôt letter from CERT when Connexion spoke to her in November.

That is the first step before the driver sends off the UK licence so a French licence can be issued.

The attestation states that the person may drive in France for a year while waiting for the French licence.

Mrs Flint, who has lived in France for 15 years and previously helped her builder husband renovate properties, said she asked her French vehicle insurance company to chase up the application with CERT.

The insurance firm reported that CERT said she would have to take a French test as her UK licence had expired. In the UK, drivers may renew a licence after 70 by attesting that they have no medical conditions preventing them from driving, but the DVLA will not issue a new UK licence to drivers who do not have a British address.

Connexion alerted the British Embassy to Mrs Flint’s problem and also raised it with CERT, which said she should explain the issue via a new online form set up for people in “urgent” situations to find out about the progress of exchange cases (see tinyurl.com/uypuzfv).

The prefecture did not provide new information, other than to repeat a recent statement that new cases will now be dealt with in three months, after the service was overhauled, and a new team is dealing with the backlog.

The embassy said it was not aware of other cases of drivers being told to take a French test – though they had heard from people worried about the delays at Nantes due to them reaching 70.

Connexion has helped Mrs Flint submit an inquiry via the new service, which requires people to create an account at demarches-simplifiees.fr or to sign in with the FranceConnect service.

The latter allows people to sign in to several official bodies’ websites with the same log-in details.

Mrs Flint said: “I still have a copy of my application and the post receipt but the insurers say that it is not enough.

“We live in the countryside and I can’t even get to the doctor’s or hospital appointments now without my husband driving me. My insurers told me, in any case, my insurance is invalid as I’ve been told to take a new test. That was devastating. Now I have hope that we can get something done about this.”

Kim Cranstoun, founder of the Applying for a French Driving Licence Facebook group, said members of the group have always been able to obtain a French licence if they applied before the licence expired.

“If an application is submitted before it expires, preferably not two days before, that is acceptable. You should keep all postage details and a copy of the application, which will give you back-up evidence of application.

“But if the licence expires with no attestation issued, then you can’t drive, unfortunately. It’s not just a question of the licence, but the insurance as well.”

Ms Cranstoun said the fact there are now two teams dealing with the backlog and new applications might mean new ones being dealt with faster.

“For some, this will feel unfair, but putting in another application is not the way,” she said. “All that will do is create duplication and slow the system down again.”

Connexion has heard from a number of readers waiting for more than a year.

An Interior Ministry spokesman said: “The ministry led the operational re-organisation of the CERT in order to find the most appropriate solutions to resolve the dossiers that have been waiting to be dealt with.”

Ms Cranstoun reports a separate issue that has been arising related to people who have licences from the Isle of Man, Guern­sey and Jersey.

She said they are not EU licences but because they carry a Union Flag, many prefectures over the years have told owners they did not need to exchange them, assuming they were British ones.

Many people are now trying to swap them before the expiry date on the card, only to be told they should have swapped them within a year of moving to France as non-EU licences.

Another reader has written about the fact that her new French driving licence mentions only her maiden name and not her married name, which appears in her signature.

Connexion has checked, and this is not an error.

The Interior Ministry states on a website that the name on a driving licence has been the maiden name since 2013.

The French government uses maiden names for official purposes, although people can ask to be addressed (eg. in correspondence) by a married name.