Driving a UK car in France: Do I need an accident form? 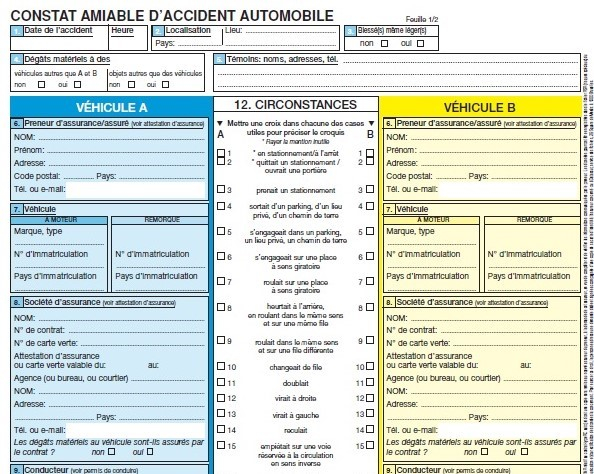 Reader question, answered: Do I need an accident form when driving a British car in France? Connexion October print edition
By Liv Rowland

I will be driving to France in my British car. Do I need a French accident form with me? F.N.

No, you do not need the French form and most British-insured motorists driving in France will not have one.

These forms are usually issued by French insurance companies, especially in the usual versions which have a carbon copy part for one party to keep so the form only has to be filled out once. Although more familiar in France than the UK, the information in the form is to an EU standard, and the same kind of form is available throughout Europe.

It is called the Constat amiable in France, and in English a European Accident Statement. Within the EU they can be filled out in any language as they have standardised sections that are easy to understand, so you could bring an English-language version. Your own insurer may be able to supply one.

With the standard French procedure, the form is filled out only once, by both drivers, and then one party takes a carbon copy sheet. Where neither party has a form with these carbon copy sections, you would have to fill out two copies separately. It is acceptable to complete the comments section in your own language (ie. English).

Most French drivers have the form in their car, so you could use the other driver’s one and, for example, use an English-language one for help in understanding it, depending on your level of French. It is not obligatory for French-insured drivers to carry these, but it is highly recommended and most people do.

Copies of a bilingual version of the form that you can use as a guide have been placed in the online My Account area for Connexion subscribers this month. Note that you should never sign one of these forms unless you 100% agree that the contents are correct. The point of them is to come to an “amicable” agreement to settle any claims quickly.

If you dispute the facts, simply make sure you at least note the name and address of the other driver, their number plate and insurer. Ask to see their insurance documents and note the policy number. If relevant, take contact details of any witnesses. You should contact your own insurer for advice as soon as possible afterwards, having completed the form and/or gathered all the details you need.

States in the European Green Card insurance system (EEA members and some neighbouring states) all have a national bureau that insurers can contact for help in resolving international claims. In the UK, it is the Motor Insurers’ Bureau (mib.org.uk).

The Motor Insurers’ Bureau says it is expected that, after the transition period, an EU directive allowing victims of accidents abroad within the EEA to make compensation claims in their own country and language is likely to end, so UK-based victims are expected to have to claim directly from the foreign insurer to be compensated where the other party is in the wrong. MIB says it is also working to sign reciprocal agreements with similar bodies in the EEA so that British people may still receive compensation in “hit and run” situations or where the offending driver is uninsured, as is currently the case.

G’day Sheila could have been b’jour Bruce
16 August 2019
More from Transport
More from Connexion
Get news, views and information from France
Join the newsletter
Subscribe to The Connexion