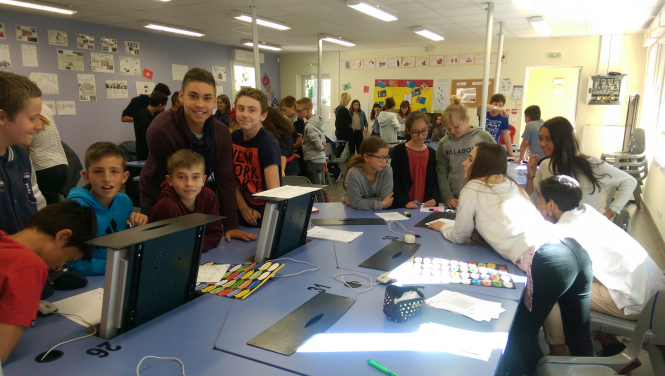 For an extra fee of €100 per subject, students at Le Cluzeau Collège and Lycée in Sigoulès can take IGCSEs in English language, literature, history and geography.
Pupils take some extra classes, but are also allowed to study for GCSEs during their normal English lessons.
The idea came from Kirsten Stroud, an English teacher at the collège who had seen her own children getting bored and frustrated during English lessons under the French curriculum.

“It is what I would have liked for my kids, who suffered so much in English lessons,” she said.
“I had already been an examiner for the Cambridge International Exam­inations Board (CIE) so it was an obvious step, particularly after they got rid of the European sections in
the collège reforms this year, where pupils had the option of doing extra English classes.
“However, it is a big project so I am taking it one step at a time.
“I would like to introduce maths as well but as the subject is taught differently in the UK. I need to find the right person to teach it here.”
Mrs Stroud teaches English language and literature, but a French teacher gives history and geography lessons.
“She speaks very good English and was tested by CIE. The syllabus is
very similar to the French one, so it
is easy to integrate the two.
“It is interesting for the pupils because they see the same subjects from both the French and British point of view.”
Besides making English lessons more interesting for pupils, Mrs Stroud says there are many advantages to having an IGCSE: “It is proof that the pupil has the same level as a child of the same age in an English school.
“It can be useful if the child wants to go to university or pursue a career in the UK, and it is also recognised all over the world as proof of competence in English. It shows the student is truly bilingual.”
Nevertheless, most French state schools will not be able to offer their students the chance to take IGCSEs.
“It has been possible here because we are a private Catholic school and we have more flexibility,” said Mrs Stroud. However, she added: “Schools like mine are nothing like private schools in the UK. We follow the same curriculum as state schools, and teachers have the same qualifications.
“Also, we are not expensive: the fee is €48 per month, so with school
dinners it works out at about €155, and you don’t have to be Catholic
to attend.
“I think it would be great if other schools like mine could offer IGCSEs.”

Mrs Stroud also gives private lessons for external students, which costs them €600 per year. This helps to pay the €6,000 a year it costs for affiliation to the Cambridge International Examin­ations Board (CIE).

In France, there are 30 CIE-listed schools where pupils can take IGCSEs and A Levels. These are mostly private, international schools which cost around €14,000 a year. They usually offer both French and UK exams, although there are some which only teach the British syllabus, and offer only GCSEs and A levels.
Some of these schools run courses for external students, or allow them to sit their exams there. However, Mrs Stroud said it would be difficult for a child to take an IGCSE or A Level without tuition.

Nonetheless, British children who have not adapted well to life in the French education system, and those who are home-schooled, sometimes go to these centres to take exams.
There are also other Catholic state and private schools similar to Le Cluzeau where parents have formed associations offering English lessons within the curriculum of the French school. Teachers are provided, and a fee is charged for the extra lessons, but it is still a far cheaper option than the private schools.
One of these is APARC, the Anglophone Parents’ Association in Chantilly, which has previously been highlighted by Connexion.

Caroline Gavine from CIE said that the board’s qualifications are internationally recognised, and open up global opportunities for students: “They are ideal for families who move countries, since they are so portable and international.

“Students who move to another country where Cambridge programmes are taught, or go back to the UK education system, will find it easy to slot in.”
They are very similar to UK exams, but adapted for a global market: “As Cambridge qualifications are taken around the world, we make sure the exam questions don’t rely on UK-specific knowledge,” she said.
“For example, in a maths paper we would avoid a question on angles that used the scenario of throwing darts at a dartboard, as we want to test the students on their understanding of maths, not on their knowledge of British sport.”

For a list of Cambridge schools in France, visit www.cie.org.uk