Learning French can be second nature 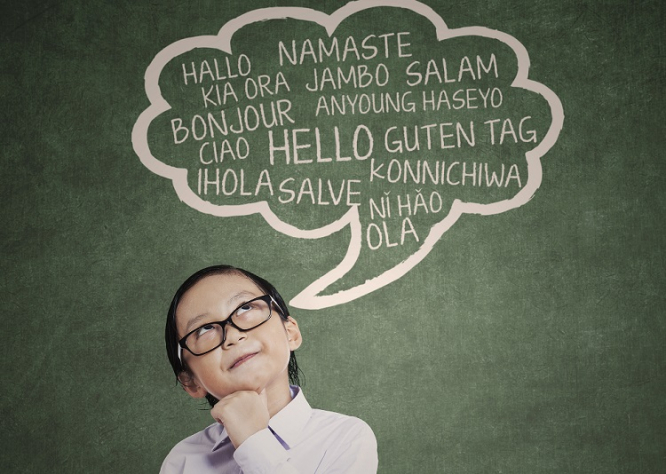 Barbara Abdelilah-Bauer (pictured right) is a linguist and psychologist, specialising in bilingualism.

She has written guides for parents of bilingual children and has three French/German-speaking children.

Families should keep up their maternal language at home, she says.

It is important because it creates a place of security when there are so many changes in their lives. They learn the new language outside the home.

Does age make a difference ?

From seven years old onwards, children learn languages in a different way. They then use the same techniques, whether they are seven, nine or 15 years old.

They will approach it in the same way as a maths problem, making comparisons and deductions in relation to their maternal language.

Under-sevens have an innate capacity to learn to speak, which will also allow them to learn a second language.

If they are at a crèche, école maternelle or primary school, they will learn the new language naturally and automatically, with a sufficient number of contact hours every day in the second language.

How should you help older children?

It is more complicated because they also have to learn to write, read and apply French to other school subjects.

The saying that children have brains like sponges is only true for the very young. The help from parents depends on what is on offer in their school. Secondary schools often have special classes for children when French is their second language.

If there is no help, and parents speak very little French, I would strongly advise finding a trained teacher, student teacher or tutor.

They will pick up playground language quickly, but will need help with formal language.

If a child is learning to read at school, should parents teach them this in their maternal language too?

This is often a worry for parents and each situation is different. However, the general advice is to learn at school.

Once children understand how to read, and this may take up to a year or longer, you can encourage them to read in English. Some words, like table, may cause confusion at first but they will quickly auto-correct to give the English pronunciation.

It is important to continue reading stories to children in English, so they increase their vocabulary and want to read themselves. If the family stays in France, French will eventually become the dominant language, and the family will have to work to maintain English.

Is it the same for television?

Parents often think watching TV will help. Before age five, we know television has no impact at all.

Afterwards, for primary school children, short programmes, under 20 minutes long and not cartoons, can help enrich their French.

Older children will watch the television anyway, so it is better to give them books. Reading is far more important for development.

How important is it for parents to learn and improve their French?

It is important, as it is a way to show they too are making an effort.

Adults often think it is harder for them than for children. Is this true?

You can learn a language, or even become bilingual, at any age. It all depends on your motivation.

We know that adults progress faster at the beginning than children but they will slow earlier and get to a stage where they will not progress and may continue to make the same mistakes, while children are more likely to go much further and become truly bilingual.

François Grosjean (pictured left) was born in Paris to a British mother and a French father.

He went to school in France and England before entering the Sorbonne, where he studied language sciences.

He had a career in academia in France, the United States and Switzerland, and is a recognised expert on bilingualism.

From his own personal and professional experience, Mr Grosjean says the message should really be that parents simply must learn about what their children are going through.

“Being parachuted into a different school system, with a different language, is not banal, as I learned when I was eight, and as I saw again through my children. Parents have a real accompanying role to play.”

Can anyone become bilingual, regardless of age/intellectual capacity?

Absolutely. About half the world’s population is bilingual.

Do we need to actively help children or will they learn the new language easily at school?

It is best if parents learn a bit about bilingualism, either by reading a book on the topic or consulting a blog.

Is there an easier age at which to start school in a foreign language?

There is a common belief that the earlier a second language is acquired, the more fluent a child will be in it.

However, when we examine the scientific foundation this belief is based on, we find that it is not as strong as we might imagine.

I talk about this in my blog post entitled “How early a second language?”.

Can you learn the language fast enough to cope with academic studies if you only start school in the second language in your teens?

It will take time for the child to acquire the second language and start being functional in it at school.

This is an important moment in their life, and parents need to accompany them and be as encouraging as possible.

Should parents look for extraFrench lessons out of school?

Unless the parents know French well and can help their children, then yes.

I think finding someone to help with French, even a few hours a week, would be of great help.

Should parents teach young children to read in their maternal language at same time as they are learning to read at school?

I would let the child make progress in reading the school language first and, when it is well anchored, start with the family language if parents wish to.

At home, should parents mainly stick to language culture supports (books, TV, etc) in their maternal language or use a mixture?

If the home language is English, stick to it for family life and culture support. French will have to be used for homework and when French friends call.

Does a child’s personalitymake a difference?

Yes, children are very different from one another. My wife and I had this situation with our two boys.

One was an extrovert, who communicated in broken French right from the start, and the other was more reserved, who observed, listened and took his time speaking the language.

I talk about this in a blog post “Two American kids in a small Swiss village”.

What if children mix the languages?

Mixing languages is a normal bilingual behaviour when with other bilinguals or when acquiring a second language.

Children will quickly learn when to keep to one language and when to let the two interact.

Should parents worry if they cannot help them with their homework?

Parents have an important role to play nurturing the bilingualism of their children – tinyurl.com/yze6md8s

If they feel they cannot help them with their homework, they should get outside help, at least at the beginning.

How difficult is it for parents to learn or improve their French?

One can learn a second language at any age. The big motivating factor is need. So, in the case of foreign families just having arrived in France, the need is to communicate with the outside world and to help the children integrate as efficiently and as serenely as possible.

Further reading: Bilingual: Life and Reality. A Journey in Languages and Cultures: The Life of a Bicultural Bilingual.