Our school’s playtime bell is a jazz riff 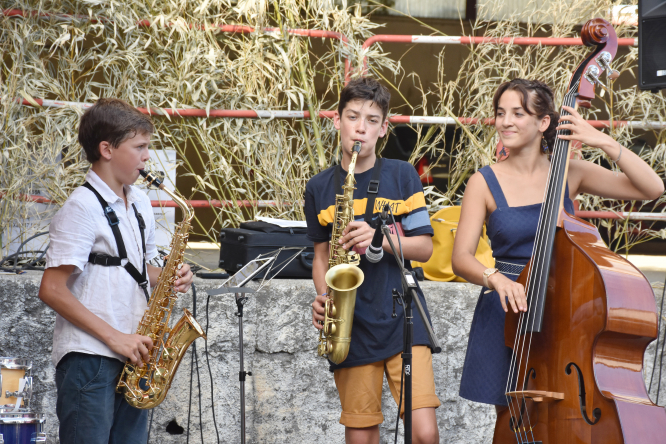 The school bell rings to mark the end of the lesson – but there is something odd. The Collège de Marciac pupils are released into the playground not to the sound of an impersonal ringing of a mechanical sonnerie but to a jazz riff by saxophonist Joe Henderson.

For 11 months of the year the Gers town of Marciac is a pleasant, uneventful place but in August it is transformed into a great jazz venue by the Jazz in Marciac international festival, which attracts top world performers to rural Gascony.

In 1993 it was decided not to let all this creative energy fizzle out over winter when it could be harnessed for young musicians, so the Atelier d’Initiation à la Musique de Jazz (AIMJ) started as a musical option available to collège pupils from ages 11 to 15.

“Marciac is not a conservatory or a music school,” said principal, Bruno Nurisso “It is a normal state school offering the same teaching as any other but with the addition of a programme of music to stimulate creativity, sensitivity and the self-realisation of the pupils.”

Children from the local catchment area are automatically enrolled for the normal curriculum but others from across France can apply to the AIJM. Marciac’s reputation ensures pupils come from many areas and they are also of several different nationalities.

Children from further away stay for the week in boarding accommodation in the town and for many this is the best part of the experience.

In the evening they become a community within the school community and enjoy extra activities such as visits from jazz musicians performing in the local concert hall.

Surprisingly, perhaps, selection is not on the basis of musical ability, playing an instrument or reading music. About one in three children accepted on the AIMJ each year will be learning to play an instrument for the first time.

What counts are willingness to take part and musical potential: particularly being able to hear and reproduce rhythm.

Jean-Pierre Peyrebelle, one of the two professional jazz musician teachers, said: “We test candidates to make sure it is their own idea to come to Marciac, not someone else’s. And we test for rhythm which is fundamental to all music, but jazz in particular.”

“A child who has never done music before has the same chance as one with experience,” adds teacher colleague, Robert Zacharie. “Sometimes it helps to have no musical baggage”.

There is, however, one consideration: not everyone can play piano or guitar as there has to be a balance of instruments in any school year.

Good primary school marks are required as the pupil has to be able to keep up with the routine academic programme leading to the Brevet exam, as well as extra time for music.

“What we are looking for is brassage [a mixture of different people],” said Mr Peyrebelle: “This is both an individual and a collective endeavour and it is about helping the child to maximise his or her potential.”

Once accepted, pupils get five hours of music tuition a week in addition to normal lessons.

They learn a variety of pieces – jazz is defined broadly – and they practise individually and in groups. They also get taught by musicians brought in as outside tutors.

Public performance is seen as part of musical education and there is a grand end of year concert in June. During the jazz festival in August the children play on stage in Marciac square to a packed crowd.

There are plenty of other musical outlets, too.

A big band assembling children from all school years practises once a week and all musicians are recorded playing on a CD so they have a record of their stay at the school.

In the final two years, some pupils form multi-instrument ‘combos’ which perform by invitation at outside venues.

Doing their own thing

Children perform together at the performance but are also expected to step to the front of the stage and improvise.

“Improvisation is fundamental,” the teachers said, “and the basics can be taught.

“Jazz is about expressing yourself but we want to get away from the mindset that jazz is all about freedom.

“It requires discipline too.

“You need to be shown the way. We train the students, give them some clues, get them to practise technique, guide them as to which notes to use.”

Legendary US jazz trumpeter Wynton Marsalis summed it up: “You can teach everything except the essence of the music, that is its spirit. But you can teach technique and you can teach the pupil how to discover his own personality, and express it through jazz.”

What is the aim of Marciac?

One thing it is not planning to do is hot-house the next batch of virtuoso musicians.

Marciac does produce some outstanding jazz musicians who come back to play in the festival, such as saxophonist Emile Parisien and singer and keyboard player Leïla Martial, but AIMJ’s aim is not to produce more of the same.

It is to give pupils the opportunity to achieve what they can, in whatever field of life.

“The difference between this and a music school or a conservatory is that we use music as a ‘lever’ to help the child in all forms of learning and self­development,” says Jérôme Delesalle, the school’s CPE (in charge of pupil welfare), “to show him or her a window open to culture in general; to encourage them to overcome inhibitions and take risks while at the same time learning to function in a group”.

Marciac works because of the commitment of three partners: the Marciac jazz festival, the education ministry and local councils.

Above all it depends on a core of extremely dedicated people who believe in child- centred teaching and who put in many extra hours of work including at the weekends when they accompany pupils to concerts.

It probably helps that Marciac is rural rather than urban and that it is a small school with only 211 pupils in total.

The teachers, however, are adamant other schools could follow the same approach by using another kind of music or dance or theatre as the vehicle towards self-realisation.

As President Macron has appealed to all schools to give more emphasis to music as a vital part of education, perhaps Marciac can show the way.

To apply for a place at the Collège de Marciac, the pupil and his/her parents must complete a dossier and attend an open day with a short interview with music teachers. For information on the school see marciac.entmip.fr and for Jazz in Marciac jazzinmarciac.co.uk

Here are some of jazz events on in France this year:

Jazz in Mars: Until April 7, Eure-et-Loir