Twice as many families opt for home schooling 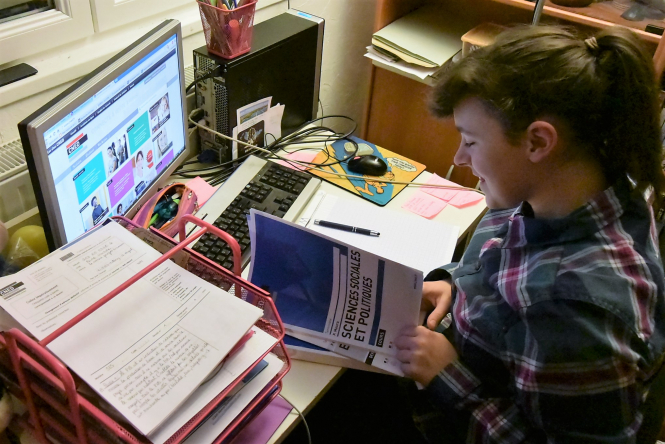 Numbers have nearly doubled in the past seven years and around 25,000 children are schooled at home – the Ministry of Education says this makes 0.3% of the school population.
Education has been obligatory for all children aged 6-16 since 1882, but not attendance in a school. It was only in 1998 that priority was given to school-based education, but the Ministry of Education says this does not limit parents’ freedom of choice. Its website says teaching can be by “the parents or by any other person of their choice. No particular diploma is required.”

So, you can teach your child at home in any way you wish. Up to a point.

There is an annual visit from an inspector to check the child’s progress and a possible second inspection if there is a problem. If there is no improvement the inspector can insist that the child goes to school, although the ministry says second inspections are needed in only 7% of cases.

Parents opt for home schooling in several situations: where they choose not to use the state education system; when a child has a particular illness or handicap; is a serious sports or music student; lives a significant distance from a school; or has parents who are travellers.

In all except the former, the family can apply to their education academie for a free or very-low-cost distance learning programme with the Centre National d’Enseignement à Distance (Cned).
One family who opted for this are the Prime family in Burgundy. Their children, Charlotte, who is 18 and in her final lycée year, and Nathalie who is 14 and in her final collège year, are both winter sport athletes and study via the Cned.
Jane Prime said her children both went to primary school but they opted for home schooling later, because she and husband Neil were unhappy with the state school and because it was easier to fit in their sports commitments.

“Every year we have to justify our reasons to keep the children at home to the local education authority and then we are entitled to cheap schooling via the Cned, which is €290 a year.
“We oversee them but they learn everything themselves from the material sent for the whole curriculum in September. Every three weeks or so they have to send in homework in seven subjects and this gives them a routine to work to.
“We feel they are getting a good education. We wanted to give our children a better or different life by coming to France and we feel that this way of learning plus their sports activities have allowed us to do this.”
Les Enfants d’Abord is an association set up 1988 and represents 600 home schooling families. Spokeswoman Gwenaële Spenlé educates her five children aged nine to 19 at home, with her husband, Gilles.
The couple have adapted their working pattern so that over the years one of them has always been at home.

Keen to dispel misconceptions, Mrs Spenlé said: “Children don’t become anti-social because they are not in class, instead they are often more sociable and able to mix with all ages of children and adults more easily than those kept in a class with their peers all day.

“We regularly meet other home school families, so our children have friends. And they tend to have more free time so they are able to take part in out-of-school activities, where they meet other children, sometimes every evening.
“The other myth is that parents need to be educated themselves. I know mothers who always hated maths but have come to learn it along with their children and they use methods which are much more hands-on than those they used at school.”

Mrs Spenlé said home schooling was growing because “more and more people are becoming dissatisfied with the national system of education – and especially at collège level.”
The internet had also “made it far easier as there is so much free educational material available and families and other home-schooled children can keep in touch via social media
so there is more mutual support”.

Their children do not follow an educational programme but are encouraged to study what interests them.

In an interview with Le Figaro, 19-year-old Bastien Spenlé told how he learned to read: “I started to read when I was six but got bored after a few weeks. My parents didn’t force me. It was only when I was nine that I really wanted to learn. I went to the library and was fed up with just looking at the pictures.

“It was only then that I really learned to read. But after, I read the whole of Harry Potter, aged 10.
“For maths I learned by following cooking recipes. If I had one for four people, I had to do multiplications to know the ingredients I would need for six people. I still don’t know my tables, but they are not indispensable.”
He added: “I appreciate this way of learning, of doing it at my own rhythm. Some of my friends regret not going to school but not me. The only problem is the other “non scos” (non-scolarisés) live a long way away. Happily, we talk via Skype.

“Until I was 10 I played with other kids in the village but when I was a teenager, interests changed and my friends became other teenagers who were in the same situation as me.”
He hopes to work in building eco-houses and has done a CAP (certificat d’aptitude professionnelle) to help him on his way.