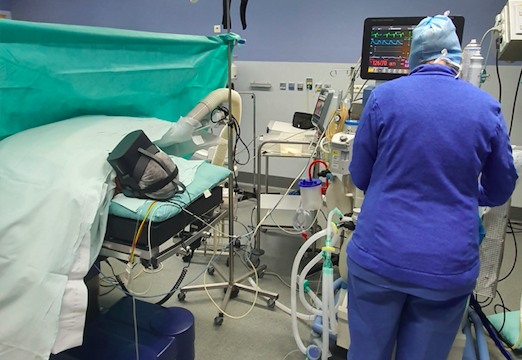 Virtual reality headsets are being used to help keep patients calm during long operations in a hospital in Nancy, Grand Est.

The headsets, which include goggles and headphones, are being used for operations in the vascular surgery unit at Ambroise-Paré hospital in Nancy, during which patients must stay still for many hours.

While using the headsets, patients enter into a serene, 360-degree, virtual world which - the hospital has said - helps them stay calm and relieves pain.

One virtual scene, based in natural beauty spot la Camargue, begins with a video of flamingos standing in a body of water on a sunny day, as a breeze moves through the trees.

As the video starts, a narrator says: “The weather is nice, and the temperature is perfect for you. Just as you like it.”

The new technology, which has been used for 50 operations so far, has been a hit with doctors and patients.

Vascular surgeon Dr Emilie Dauphin, told news source FranceInfo: “When I give the local anaesthetic, it means little jabs all over the body, [but with the headsets on] patients don’t move at all, they are somewhere else.

“It’s more pleasant for me, and it relaxes the patients.”

In a Facebook post, the hospital wrote that the headsets, created by Deepsen, had been successful in “relaxing patients who might experience anxiety or pain, in a non-medical, non-invasive way”.

The hospital described a “long, technical” operation to treat a blockage of the coronary arteries on February 4, during which the patient wore a headset.

It said: “The result was a patient who experienced less pain caused by being immobile for a long period, less anxiety, and a serene medical team.”

Hospital plans to increase use of new technology

Doctors can also time events in the virtual reality world to distract patients from painful procedures that are happening to them.

Dr Dauphin said: “At the moment when the doctor is about to give an injection, we create a distraction on the screen so that the [patient’s] mind can get away.”

A patient interviewed after an operation said: “I had no idea that they were using scalpels on me”.

The headsets have been in use in the private hospital since November 2020.

Plans are now underway for them to be used in other departments, especially during operations to insert pacemakers.

Artificial hearts to be available in France by 2023

France to invest €1bn in cybersecurity as hospitals targeted